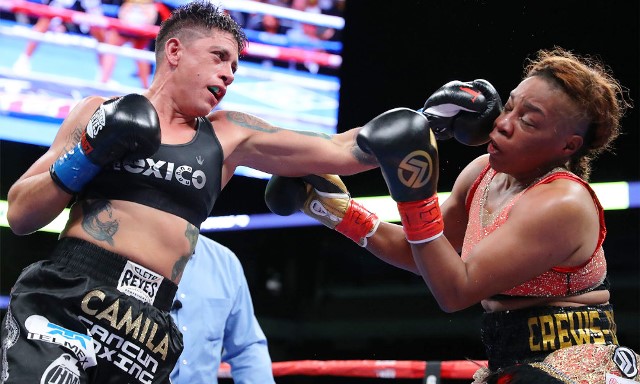 According to VADA test results Mexico’s Alejandra Jimenez was found to have taken a banned substance before her fight two weeks ago in Texas.

After the win, there were widespread questions and accusations regarding Jimenez, most of them unfounded. But, according to testing by VADA, the group hired by the WBC under the Clean Boxing Program that started this year testing female fighters, Jimenez was discovered to have a banned substance in her bodily system.

“An adverse finding from a test conducted on Jan. 11, 2020 on Alejandra Jimenez as part of the testing protocol for her fight vs. Franchon Crews-Dezurn,” was found according to a statement released by the World Boxing Council (WBC) on Friday.

The WBC also stated that it initiated a response under the Clean Boxing Program but did not state what the response entails. The WBO does not test women in world title fights.

It was Crews-Dezurn’s second title defense and after 10 turbulent and close rounds Jimenez was deemed the winner by split decision and became the WBO and WBC world titlist and second division champion.

“It is extremely unfortunate to learn that WBC and WBO super middleweight world champion Alejandra Jimenez (13-0-1, 9 KOs) has tested positive for banned substances after her title fight with Franchon Crews-Dezurn (6-2, 2 KOs) on January 11,” said Oscar De La Hoya, Chairman and CEO of Golden Boy. “As Franchon’s promoter, we are incredibly disappointed for her as she worked incredibly hard to defend her titles.  However, our job is to ensure the safety of our fighters both inside and outside of the ring. Thus, we have always insisted and supported testing through the Voluntary Anti-Doping Association (VADA) for all of our world championship fights. Jimenez’s fight against Franchon Crews-Dezurn is no exception. Now our job is to find justice for Franchon by working closely with the WBC and the WBO in order to re-instate her as a world champion.”

Ironically, De La Hoya also was victimized twice by opponents who were caught using banned substances when he fought as a prizefighter in world title efforts.

Jimenez had formerly captured the WBC heavyweight world title and dropped down in weight because of the lack of competition in that weight division. After losing more than 60 pounds she decided to fight in the 168-pound super middleweight division where competition was fierce. It was also hoped that a win over Crews-Dezurn could induce a fight against Claressa Shields the three-division world titlist and top female fighter in the world pound for pound.

A fight with Shields is presumably dead now.

In previous world title fights where a winning fighter was found with a banned substance, the guilty party was stripped of the titles.

Crews said she needed to gather her thoughts on the news of Jimenez’s failed test results.