Amanda Serrano Wins and Much More in Female Fight World
Written by: David A. Avila 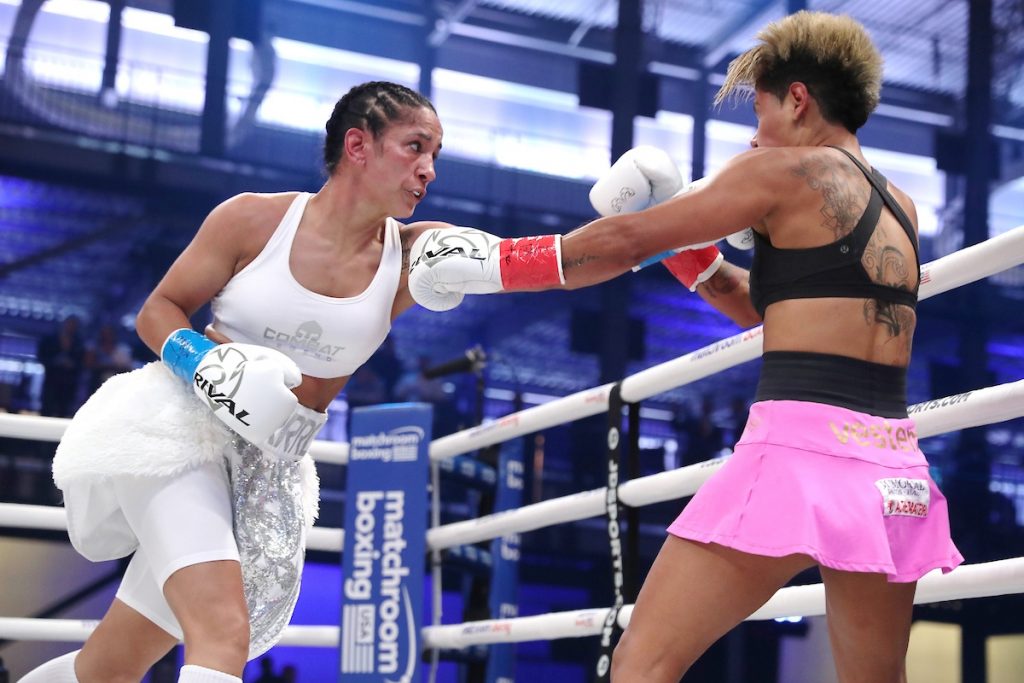 After learning a mega fight was finally arranged, Amanda Serrano requested a quick fight to find her boxing footing and easily dispatched Brazil’s Simone Aparecida Da Silva like a fleck on her sweater last weekend.

“I had to stop her,” said Serrano, a seven-division world titlist. “I wanted to show that I’m on a different level.”

Now it’s on to the bigger game.

It doesn’t get bigger than Serrano facing undisputed lightweight champion Katie Taylor sometime in April. After nearly four years of waiting the ultimate challenge has arrived. But for whom?

On Saturday in Miami, Serrano burned by the Brazilian Aparecida like a Corvette passing a Jeep on the highway. The Puerto Rican southpaw simply clamped her foot down on the pedal and dared her foe to trade blows. She did and she was done. It was as simple as that.

“I know many have skills but I’m also gifted with power and the ability to take a punch,” said Serrano. “So I take way more chances than most.”

Serrano brings to the boxing ring her blend of power, speed and skill and thinks that will be quite enough for the Irish Olympian Taylor who won gold in 2012.

No site has been finalized but the potential clash features two of the top female fighters pound for pound in the world. It doesn’t get better than this. The two desirable sites point towards either New York City’s Madison Square Garden or some place in London, England.

Though Taylor works out of the United Kingdom she has fought four times in New York City including twice at Madison Square Garden. As for Serrano, though she hails from nearby Brooklyn, fighting in London appeals to her too.

“I’ll still give you guys the best version of me, I promise,” said Serrano.

It doesn’t get bigger than Serrano versus Taylor for all the marbles.

McGee (26-3) is making the first defense of the world title she won in early December. Now she gets to fight at home and meets Australia’s Deanha Hobbs (8-1) in a 10 clash at Hammond Civic Center.

Wahlstrom has been pretty lucky squeaking past several American fighters by extremely close and debatable scores. Now she gets Harper who is making the second defense of the IBO title and they’re meeting on British soil.

Can Harper’s aggressive style allow her to overcome the strategic counter-punches of the veteran from Finland who’s making her sixth defense since first winning it on April 2015. Though she lost to Katie Taylor on December 2018, that was in the lightweight division.  This will be a very good test between two 130-pound champions.

The pride of Costa Rica Yokasta Valle (19-2) makes her second IBF minimum weight world title defense On Saturday Feb. 8, against Philippines Carleans Rivas (8-6-4) in a 10 round fight at San Jose.

Valle, 27, was born in Nicaragua but lives and trains in Costa Rica and has built up a massive following in her adopted country and some say most of Central America. She’s also a fearless competitor who won the title in Spain against that country’s best Joana Pastrana last August.

Rivas, 31, is tall for the minimum weight class and has experience against top flight competition. It’s a solid test in the 105-pound weight class.

Amy Naert (3-0) knocked out Jovana Zdravkovic (0-1) in the second round on Saturday Feb. 1. The minimum weight fight took place at Ingelmunster.

Vicky Quevedo (1-0) knocked out Angie Barcas (2-14) in the third round on Friday Jan. 31. The super lightweight bout was held at Santiago.

On Saturday Feb. 8, minimum weights Yokasta Valle (19-2) and Carleans Rivas (8-6-4) meet 10 rounds for the IBF minimum weight world title at San Jose. This is her second defense since winning the title in Spain last August. Rivas fights out of the Philippines.

On Saturday Feb. 8, middleweights Christina Hammer (24-1) and Florence Muthoni (12-8-2) meet eight rounds at Goeppingen. This is Hammer’s fist fight since her loss to Claressa Shields almost a year ago.

Dorota Norek (5-1) knocked out Roz Mari Silyanova (1-9-1) in the first round on Saturday Feb. 1. The super flyweight fight took place at Rokietnica.

Amanda Serrano (38-1-1) won by knockout in the third round versus Brazil’s Simone Aparecida Da Silva (17-15) on Thursday Jan. 30. The lightweight fight took place at Miami, Florida. Also, Avril Mathie (5-0-1) won by fourth round knockout over Angelina Hoffschneider (0-3) in a super bantamweight fight.

On Thursday Feb. 6, flyweights Sulem Urbina (11-0) and Noemi Bosques (12-14-3) meet in a six round clash at Indio, California. DAZN sill stream the fight.