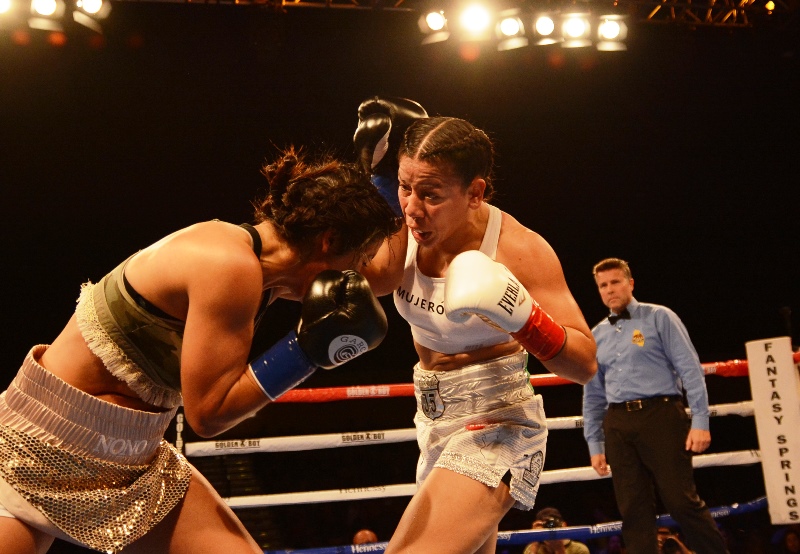 Up-and-coming prospect Sulem Urbina (12-0, 2KO) of Phoenix, Arizona, by way of Hermosillo, Mexico, put together her best performance so far in her pro career in completely dominating veteran Noemi “La Rebelde” Bosques (12-15-3, 2KO) over six rounds at a catchweight of 114 pounds on Thursday.

In front of more than 800 fans the female contest was part of the Thursday Fight Night presented by Golden Boy Promotions at the Fantasy Springs Casino in Indio, California.

After six hard-fought rounds, Urbina remains undefeated with a lopsided 60-54 three times scorecard from the judges.

The fight marked Urbina’s first professional bout in the United States after beginning her career south of the border in her native Mexico.  The night also marked the first time her parents were able to see her fight live as a pro.

“My mother gave me a hug and told me to take care of myself,” Urbina shared minutes after her fight.  “After the fight she was so excited and told me she was proud.  She looked happy.”

Urbina, an amateur standout as part of the Mexico’s national team, was coming off third round knockout over Luz Elena Martinez in her last fight back in November while Bosques scored a split decision win September against Shelly Barnett.  Bosques, a tough journeywoman who has fought from flyweight to featherweight, had not had her hand raised since 2016.

Despite the less than stellar record of the 36-year-old Bosques of Saint Petersburg, Florida, she is known as one of the most fearless opponents in female boxing willing to fight anybody anywhere including former champion Heather Hardy at 126 pounds, Diana Fernandez, Lourdes Juarez, Mariana Juarez and Rosalinda Rodriguez among many others.

From the opening bell Urbina, 29, was the aggressor looking for the knockout with hard compact punches to the body and head.  Staying in the center of the ring, the slightly shorter Urbina was the busier one as she stalked Bosques with good combinations to the body and head.  Bosques attempted to keep her opponent at bay with a jab but they were too few and far between to make any difference.

“I was very surprised Bosques had the size on me,” Urbina stated of the slight size difference.  “I was also surprised she was able to take all my punches.”

In the last seconds of the second round Urbina scored a hard left hook that hurt Bosques forcing her to take a couple of steps back.

Bosques had her moments throughout the fight with a long jab followed with a sporadic right hand but they never scratched the surface against a relentless Urbina who just kept coming forward focusing on attacking the body before the head.

In the fourth Bosques displayed some veteran tricks as she looked to score in-between the faster punches from Urbina landing a right hook to the body followed by a left hook to the head.  As Urbina began to push Bosques against the ropes, the Mexican decided to return the favor with the same combo but much harder and crisper.  The left hook staggered Bosques as she stumbled back.  Urbina looked to finish the night but the bell rang to end the fourth.

With her trainer and husband Andy Soto and Joel Diaz urging her from the corner to finish the fight in the fifth, Urbina looked to cash in the success of the combination and looked to score it again.  She concentrated on the right hook to the body followed by the quick left hook to the chin throughout the round but Bosques was able to survive.

Bosques kept scoring sporadically mostly with straight punches in-between Urbina’s nearly unstoppable attack but Urbina was able to wobble her again near the end of the round with the same left hook, this followed by a straight right.

Smelling blood, Urbina came out with everything in the sixth and final round.  Urbina was able to counter Bosques straight punches with the Florida native moving more than attacking.  Urbina caught Bosques a couple of times with hard overhand rights that made her think twice of getting any closer.  Despite Urbina’s urgency, Bosques was able to survive to hear the final bell.

“We were looking for the knockout,” Urbina shared.  “I believe I still need to work on turning my punches better but I don’t want to take anything away from Noemi, she’s a warrior.  I would say my performance was a B minus, I still have a lot I need to improve on.”