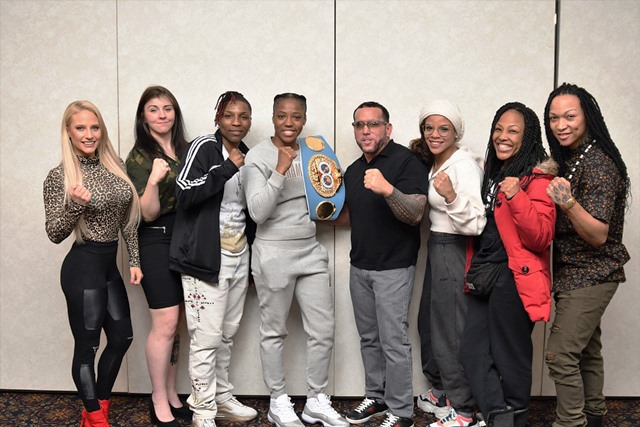 Brian Cohen: In Process of Building An Empire

It is easy to believe for someone who grew up around boxing to find a place in it for the majority of their lives.  For Brian Cohen of Philadelphia, PA, CEO of Team Empire Boxing, his place was in female boxing.

From 1995 to 2010 Cohen fought as a professional boxer amassing a very respectable 15-2, 14KO record but at the tail end of his career he saw the path laid out before him.

“Oddly enough I was pretty close to the end of my career and I did a card here in Philadelphia,” Cohen said of that fateful night in 2009.  “Belinda Laracuente fought on the card, she fought Lakeysha Williams.  Melissa Hernandez came with Belinda and Melissa and I started talking and Melissa was the first female I managed.  I liked managing her and then from Melissa I started managing Ronica Jeffrey and then it was just a snowball effect. I just enjoy managing women boxers, sometimes they are much easier to deal with than the men. I enjoy their fights a bit more with all honesty.  With the two-minute round, they are all business.”

Female prizefighting has been a part of the sport almost as long as the sport itself.  Throughout its history it has enjoyed a Renaissance per se at different times with the most recent one this current wave where arguably it has seen its highest level not only in talent but in exposure.

Cohen remembers when that wasn’t the case and the hurdles he had to jump to get his fighters exposure.  “Some of the questions you get from promoters and TV folk are do they look like boys.  They were concerned of the look; they didn’t want to see a girl that looked like a guy in all honesty.  I guess some promoters saw them as a sideshow at one point, some kind of special attraction.  It was very disrespectful with pay but if you didn’t take the pay, you didn’t fight.  Back then, seven, eight years ago, title fights were three-grand.  You were pretty much told to be happy to take that.  Times have changed.”

Early on in his boxing manager career, Cohen saw the potential women had to give: attractive television fights despite the lack of money and exposure being afforded to the sport at the time.

“The first time I couldn’t believe the girl took so much punishment was Melissa Hernandez fighting Victoria Cisneros,” he remembered of the eight-round fight that took place in 2010 in New Mexico.  “I don’t even know if there is video of it. Victoria is a warrior; she was a lot bigger than Melissa.  It was just a great fight; it was a great seesaw battle.  Victoria took a lot of punishment but also fought back, it wasn’t like she just stood in a corner and took a beating.  It was a great fight.  From then on I said I had to get some more females, after I came back from New Mexico, I started to look for a lot more female fighters.”

Cohen found them. With every new charge he would take into his banner or better yet, as he likes to describe it, family, Cohen would learn new things about his fighters.

“What stands out is their willingness to fight and their willingness to jump up two, three, maybe even four weight divisions at some point when you can’t get a guy to fight two pounds heavier or two pounds lighter,” he said with a chuckle.  “You have a female, I can give you an example, Melissa St. Vil, I told her she was going to fight for the 147-pound title one time.  Melissa is not a 147-pounder.  She is barely a 140-pounder.  She fought and actually won the title at 147.  That is a prime example.  I think the women have a little bit more trust in me.  I have a better experience dealing with them than I do with the guys.”

The former fighter and father to a young girl is excited for the future and the new Renaissance we find ourselves with women’s boxing.  “I think it is night and day from what it was three years ago.  It has really evolved and blossomed into its own sport.  One of the most amazing things is when I was working Christina Linardatou’s corner and you walk into the MEN Arena and its packed with people and you are the main event fighting Katie Taylor.  It’s amazing.  It’s amazing to see.”

Despite it all, Cohen’s future is not all roses. He has two of the most talented 140 pounds in the scene right now, IBF champion Mary McGee and the newly crowned WBO queen Christina Linardatou.  Cohen knows that they might just have to face each other in the future.

“If it financially appeases both of them I am going to have to but I don’t want to though,” he explained.  “Mary McGee is a single mother, if she feels it is going to provide food, shelter and clothing for her and her kid, by all means I will facilitate the process and I’ll get the most money I can for her. Same thing for Christina (Linardatou).  If Christina thinks she wants to add the IBF title to her thing and the money is right, of course I would have to negotiate for both of them.  Do I want to? No, will I’ll be making percentages out of it? Yeah, but to me that is not the way I want to do it.  I know it will happen because literally I have four 140-pounders.  The pool is not very deep in women’s boxing so I know eventually somebody may have to fight somebody but with that being said, I don’t want it to happen.”

One fight that he would make right now is McGee against the other world champion in the super lightweight division Jessica McCaskill of Chicago, Illinois.  McCaskill holds the WBC and WBA straps.

No love is lost between McCaskill and McGee.  Nearby interstate rivals, they’ve had words over social media with McGee going public to state there is no other fight she wants more than against McCaskill.

“I tried to reach out to Rick Ramos, he doesn’t answer my phone calls, text messages, smoke signals, it’s like he owes me child support money,” Cohen said of the steps he has taken to try to make the fight.  “He doesn’t respond to anything.  He is petrified to have Jessica McCaskill fight Christina (Linardatou).  If Lou DiBella can make this fight happen with Mary McGee and Jessica McCaskill, then great.  If not, I have other ideas and other options.  I am not worried about it. The money fight obviously would be Jessica McCaskill, do they want to fight anybody? I don’t think so.  They have two of the belts, if they want to unify they have to go through me. I don’t see Rick Ramos or her, I don’t see them doing it.  I don’t see them pulling the trigger on it.  Let see if Eddie Hearn can wave dollar signs and make it happen.”

As far as the future of boxing? According to Cohen, it can only get better.  “I am excited for it because I see a lot of great matches that potentially can happen. Whether it will happen are two different stories.  Eddie Hearn and the DAZN are a big component of this.  They have a lot of the top fighters but match them with the fighters that DiBella has. For example, Hearn has Cecilia Braekhus, well, we have Kali Reis.  He has Katie Taylor, you have Mary McGee, you have Christina (Linardatou).  Melissa St. Vil just won a title, throw her into the mix.  He has Terri Harper, Lou DiBella has Ronica Jeffrey.  I see big things happening in women’s boxing.  In the future there is going to be a tidal wave of great female fighters.  I see women’s boxing flourishing in the future.  I think it is an exciting time for amateur women’s boxing and the ones that are going to come out of the Olympics.  I just see great things.”

To listen to the exclusive interview in its entirety, please visit BlogTalkRadio.com/2MinRound