Amanda vs Katie and Other Big Fights on the Horizon
Written by: David A. Avila 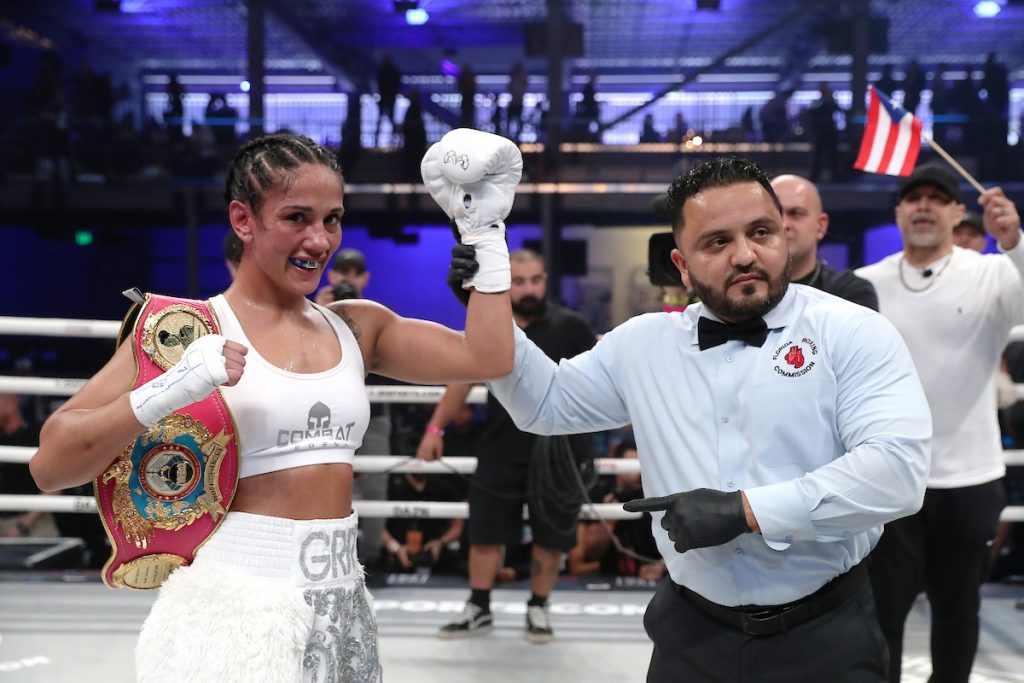 Let’s not forget that prizefighting began on the British Isles several centuries ago. But female prizefighting only gained traction in the last 40 years.

Ireland claims the mighty Katie Taylor but the United Kingdom also has a number of its subjects punching their way into the worldwide boxing spectrum.

With Tyson Fury and Anthony Joshua claiming all the men’s heavyweight world titles let’s not forget about the women such as Terri Harper the newly crowned WBC and IBO super featherweight titlist or lightweight Chantelle Cameron and super middleweight Savannah Marshall shooting up the ranks.

All are important players in the women’s arena and could be contending for world titles late this year or next year. Expect it sooner not later.

Harper may not be ready for the likes of Mikaela Mayer though she has the fighting tools with her speed and punching power to be a problem for anyone in the 130-pound division or higher. Two weeks ago the 23-year-old from Yorkshire, England unseated the WBC titlist Eva Wahlstrom in a 10 round scrap. It started slow and ended with a roar.

Is she ready for Mayer, Amanda Serrano or Melissa St. Vil?

Based on her promoter’s actions they don’t believe so. They have her pointed in the direction of Katherina Thunderz.

That’s OK. Plenty of time for the others.

Mayer has a date against former multi-division world champion Melissa Hernandez who emerged from retirement to hand Selina Barrios her first defeat.

This is not an easy fight for either pugilist.

Hernandez has decades of experience and was the last to defeat the incredible Layla McCarter back in 2007. She has more moves and counter moves than most. And she loves to teach lessons in the boxing ring.

The much taller Mayer has a sizzling jab, basketball player length, and packs power in her slender frame. She also has a mean streak and once the fight gets torrid those punches come nonstop.

It’s going to be a tactical affair for a while. ESPN will show the co-main event.

One person who might be attending will be Amanda Serrano.

Puerto Rico’s Serrano has a date set to meet Ireland’s Katie Taylor in late April. No site has been determined or announced but New York City or London were two destinations murmured.

According to a source connected to Katie, there’s an unsubstantiated rumor that the Irish speedster won’t be able to fight until May. That would squash any Serrano-Taylor bash in New York. It also could possibly force a re-negotiation of their contracts.

But it’s only a rumor at this point.

Hopefully the fight remains headed to New York City on April 25, where a female clash of epic proportions can get its due recognition. DAZN is slated to stream the female mega fight that will help women’s boxing attract more fans in the USA.

Great Britain has a solid female boxing following, but the U.S. still lags behind when it comes to the women’s side. A Serrano-Taylor clash in New York City would definitely amp interest in American female prizefighting.

Serrano does not care whether it’s New York or London. Either destination suits her.

“I’m not one of those that worry about judge’s decisions,” said Serrano.

It seems there’s some traction to the possibility of current female super star Claressa Shields meeting Laila Ali in the boxing ring if someone can muster $2 million dollars.

Ali said she would come out of retirement for the right amount of money. Shields is like a gunfighter with an itchy trigger finger. She just wants a showdown.

Showtime has a deal with Shields.

The last time Ali laced up the gloves was more than 13 years ago when she knocked out Gwendolyn O’Neil who ironically is fighting this weekend in a heavyweight fight against Laura Ramsey in Florida.

Ali knocked out her last 13 consecutive opponents. Of the 24 foes she faced she sent 21 unconscious or stopped. She was no joke.

Shields remains one of the most talented female fighter’s I’ve ever seen. Plus, she is only 24 years old soon to be 25 in a few weeks.

On Friday Feb. 28, bantamweights Daniela Bermudez (27-3-3) and Alys Sanchez (16-6-1) meet 10 rounds for the WBO world title at Santa Fe. This is Bermudez, 30, sixth defense of the title since winning it on October 2017.She is also a former super flyweight titlist.

Taylah Robertson (1-0) won by first round knockout against Ranee Klinratree (0-4) on Saturday Feb. 22. The featherweight match was held at Chandler, Queensland.

Tania Walters (2-0) won by unanimous decision after four rounds against Erika Hernandez (5-6-1) on Saturday Feb. 22. The lightweight bout was held at Brampton, Ontario.

Leila Beaudoin (2-0) won by decision after four rounds against Maria Del Angel (1-1) on Friday Feb. 21. The lightweight match was held at Rimouski, Quebec.

Manatsavee Srithongkham (1-1) defeated Suvanan Akapunya (0-2) by knockout in the second round on Saturday Feb. 22. The minimum weight fight was held at Pathum Thani.