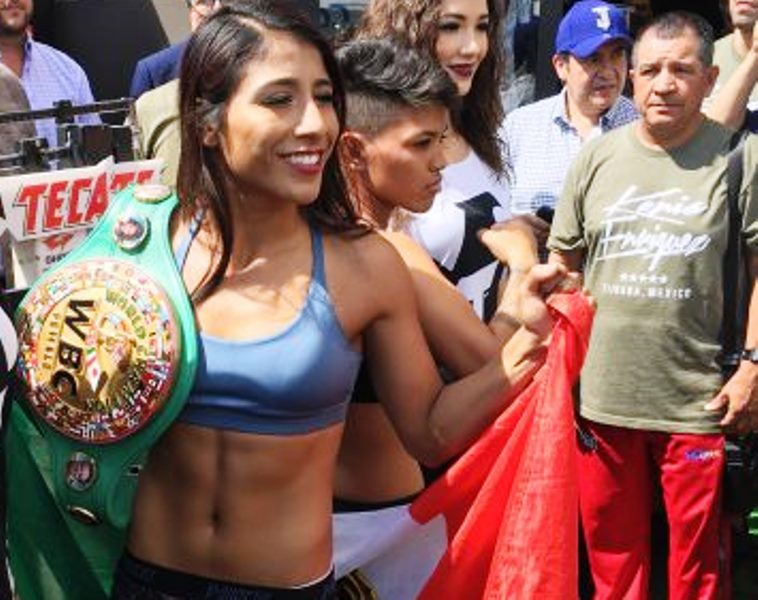 If a world champion does not defend against the best, it leads to fan disinterest.

WBC light flyweight titlist Yesenia Gomez defends her title this weekend, but not against interim world titlist Kenia Enriquez who is the highest ranking fighter in the division. It’s a fight that should have happened a year ago and one of the greatest travesties in the boxing world today.

While most of the boxing world knows Tijuana’s Enriquez deserves a world title opportunity against Gomez, the WBC has allowed this disgrace to continue. No excuses can be made for this gross injustice.

“I have already talked about unification and I am sure it will happen,” said Enriquez to thePrizefighters.com. “I know that I am capable with the skills I have to become the absolute champion. I will show them.”

Enriquez has long been considered one of the top female fighters pound for pound at any weight in the world. She became the interim WBC light flyweight world titlist when she knocked out Maria Salinas in the third round on May 2017. That’s almost three years ago.

Meanwhile, Gomez became the actual WBC light flyweight titlist with a majority decision win over Esmeralda Moreno on September 2018. Since that win she has defended against three opponents: Erika Hanawa, Ana Victoria Polo and Debora Rengifo. None were more deserving than Enriquez who was ranked higher than all.

So why not Gomez fight Enriquez?

It’s a question to ask WBC’s Mauricio Sulaiman who controls all final decisions with that sanctioning organization.

On Saturday, Gomez (17-5-3) defends against Victoria Argueta (14-2) at Cancun. No one deserves to be fighting Gomez more than Enriquez.

WBO super featherweight titlist Ewa Brodnicka retained the title with a decision over Djemilla Gontaruk at Dzierzoniow, Poland. It was the fourth world title defense for 35-year-old Brodnicka.

On social media Brodnicka proclaimed she’s ready for America’s Mikaela Mayer who has a very competent opponent next week in Melissa Hernandez. One step at a time.

Mayer, a former US Olympian, has powerful backing with Top Rank but has been unable to lure one of the world titlists into the boxing ring. All of the super featherweight champions are talented. It remains one of the most powerful divisions in the entire female fistic world.

When Mayer fights Hernandez on St. Patrick’s Day in New York City it represents one of the top female fights of the year so far. It’s the new guard versus the old guard and should be a monster of a fight.

Two weeks ago we heard rumors that the super fight between Katie Taylor and Amanda Serrano was not going to take place in New York and would not occur in April. Those rumors were correct.

Well, it’s bad news for those wishing to watch the battle of titans in New York and for building up American interest in female prizefighting. At least American fans can watch it on DAZN on May 2 live from Manchester, England.

One of the benefits of DAZN and also ESPN has been the ability to watch prize fights emanating from Europe. It’s opened up a new world for boxing fans in the U.S. Many American fans were unaware how big boxing is considered in Europe or anywhere else in the world.

Beke Bas (14-0) knocked out Nana Chakhvashili (7-14) in the third round on Saturday March 7. The lightweight clash took place at Leverkusen.

Zulina Munoz (52-3-2) won by technical knockout in the second round over Valeria Perez (12-8) on Sunday March 8. The bantamweight regional title fight was held in Mexico City. Munoz is a former super flyweight world champion.

Tania Enriquez (15-0) knocked out Elizabeth Lopez (7-3-4) in the seventh round on Friday March 6. The regional light flyweight title fight took place at Tijuana. Enriquez, 23, is the younger sister of Kenia Enriquez.

Ewa Brodnicka (19-0) was the winner by unanimous decision after 10 rounds versus Djemilla Gontaruk (16-7-2) on Saturday March 7. The WBO super featherweight world title fight was held at Dzierzoniow. It was the fourth world title defense for 35-year-old Brodnicka.

Jordanne Garcia (4-1-1) and Jozette Cotton (0-0-1) fought to a draw after four rounds on Saturday March 7. The middleweight fight took place in Albuquerque.