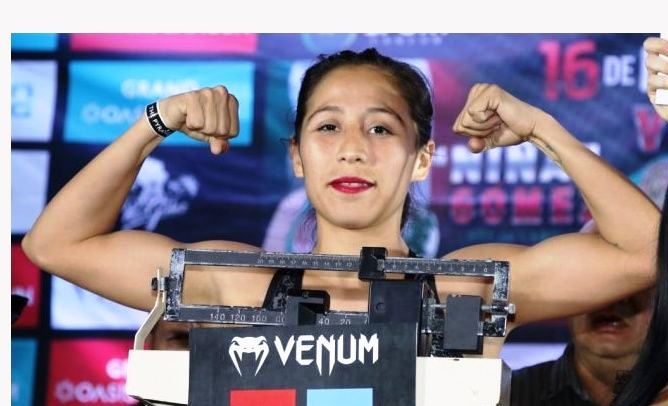 Perhaps more surprising than WBC light flyweight champion Yesenia Gomez’s win for the title is her reign.  Not many expected the 23-year-old Gomez (15-5-3, 6KO) of Cancun, Quintana Roo, to get a draw over the much more experienced and known Esmeralda “Joya” Moreno back in May of last year.

Last September Gomez, who is promoted by Pepe Gomez’s Cancun Boxing, took it a step further and actually defeated the favorite Moreno via a majority decision making her the first female world champion from her state and only the third boxing world champion in history from Quintana Roo.

“I am very happy and thankful to God,” Gomez said at the time of her win last year.  “Every day I would get up ready to train and it was tough.  Now I know it was all worth it.  I am now a world champion and the best part is that it was at home.”

“It is unexplainable,” she said of what she felt when she heard her name announced as the new world champion.  “I have always said you only feel that feeling once, when you win your first world title, maybe I will capture other world titles but what I felt that night I will remember for the rest of my life.”

Earlier this year Gomez defended the title successfully with a majority decision over the Japanese Erika Hanawa and this coming Saturday in her hometown of Cancun, Mexico, she will look to defend it again against fellow Mexican Ana Victoria Polo (8-4, 2KO) of Mexico City.

“I am motivated for my second defense,” Gomez said at the final press conference.  “In my first defense I faced a tough opponent who made me mature and I learned a lot.  My next opponent is as tough as the first.”

“I am going to continue as a world champion,” she assured.  “I know that you can never convince everybody and that is the job of every boxer.  I am very happy with my work.  Victoria Polo is a fighter who never stops going forward throwing punches, she takes advantage of her size and she has only lost outside of Mexico.”

The fight, presented by Cancun Boxing in association with Promociones del Pueblo, will be televised live in Mexico by Televisa.

The road has not been easy for “La Niña”.

She was able to string five wins in a row, including a win over Arely Valente in a rematch for the WBC Youth Flyweight title, before dropping another decision, this one a majority one, to Valente yet again in the summer of 2013.  That followed another loss to Susana Perez.

Seven straight wins followed before a no-contest against Lourdes “Pequeña Lulu” Juarez in September 2016.  Two controversial draws against Jackie Calvo and then yet another loss to the former IBF super flyweight champion Guadalupe Bautista ensued before that first draw against Moreno.

All that goes by the wayside now since she proudly wears the green and gold belt around her waist.

“I know that many will now raise their hands to face me,” Gomez said of her position as the best light flyweight in the world according to the WBC.  “I think that is what it is all about when you are a world champion, to face the best and I have never ducked anybody.  I have faced tough opponents and it has been worth it.  I am ready to face anybody.  I just have to keep working in the gym, keep learning, you never stop learning in this sport.”

For the much less experienced Polo, 34, it was a surprise she got the call to fight for a world title.  Ranked #21 by the World Boxing Council, Polo assures she will not let the opportunity go by the wayside.

“It was a big surprise,” Polo said recently.  “I was hoping for some kind of opportunity in my career but not this quick.  I think it is at the right moment.  We know what a big fight is so if everything goes according to plan this upcoming Saturday there will be a new world champion.”

Polo began her professional career late by all accounts, as a the then 28-year-old made her pro debut in in late 2013 with a win over future world champion Monserrat “Raya” Alarcon.

She put together five straight wins before dropping her next two but to high-level opposition, world title challengers Sandra Robles of Mexico and Yokasta Valle of Costa Rica in 2016.

Two more losses came after a quick win but overseas against the likes of Zongju Cai in China and the up-and-coming Kim Clavel in Canada.  Because of that and despite Gomez having more experienced, Polo is confident she can pull the upset.

“We are going to look to fight on the inside,” Polo said of her strategy against the world champion.  “She is tall and has long arms, she knows how to take advantage of that.  We have trained so that we can pressure all night long and not stop throwing punches.”

In her last fight in March Polo stopped Branda Ramos in four.