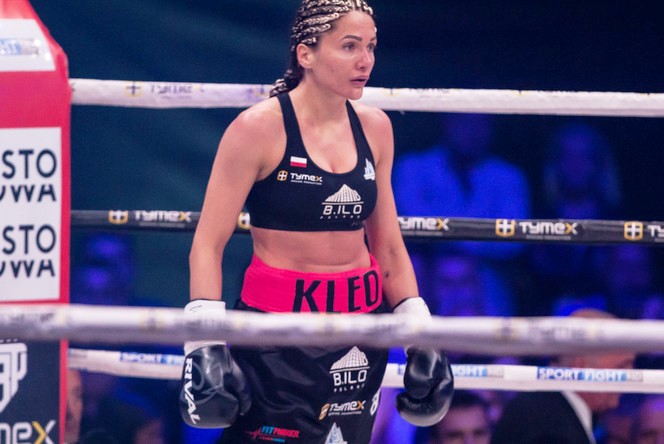 WBO Super-featherweight titlist Ewa Brodnicka controlled almost every minute of her bout against determined Djemilla Gontaruk at the OSiR Hall in Dzierzoniow, Poland.

Still, if you saw the way she held back tears and sank to the canvas as the unanimous decision in her favor was announced, it would seem the outcome was much closer than the near shutout scoring indicated.

Brodnicka, now 19-0 (2KO), deserved the widespread verdict, though the much shorter challenger from Belgium tried to live up to her “Bulldog” nickname. She came straight at Brodnicka for most of the fight but could never put together enough offense to possibly earn more than a round or two.

Perhaps Brodnicka was simply overcome with emotion after making her fourth successful defense on a night that was advertised as a prelude to bigger things, especially since prior to the fight Brodnicka teased about making a major announcement after her anticipated victory.

“I don’t know if a unification fight is possible for this year, but I can assure you people that we have special plans for this year,” said the popular champion, sending Polish media into unfounded speculation.

After the contest, when an in-ring interviewer spoke about a possible fight in the United States, Brodnicka and her team deferred to an unknown future.

“You’ll find out soon,” she promised the crowd with a slight smile.

It may have been a clue that Brodnicka mentioned only one possible future opponent; the rising, undefeated US-based contender Mikaela Mayer.

Business-wise, if 35- year- old Brodnicka seeks to expand her horizons, that’s a good move. Polish media provides substantial coverage on US boxing, and east coast Polish ex-pats are known for showing up to support visiting countrymen in places like Chicago, New York and Atlantic City.

The outlook isn’t as rosy in terms of the fistic odds. Outside of the elite Delfine Persoon and IBF belt holder Maiva Hamadouche, Mayer is likely the toughest current assignment in the deep-quality super-featherweight realm.

Brodnicka has an edge in professional experience, but Mayer was a very distinguished amateur. Mayer, 12-0 (5KO) is an inch taller than Brodnicka, with a similar reach, but the main factor to be considered is the American’s wallop. It’s unlikely Brodnicka has faced anyone near Mayer’s aggressive tactics and strength.

Add that to the fact a match against Mayer would almost definitely be in the US, it seems Top Rank would have to dangle an uncommon payday to entice the champion to travel into such hostile waters.

A far less threatening Gontaruk, now 16-7-2 (2KO), definitely kept Brodnicka very busy. Brodnicka absorbed more than a few clubbing hooks to the body and her head got turned a few times by stinging overhand rights. The visitor’s problem was an overall lack of serious power.

That seemed to be the case with both boxers. Most punches seemed more bothersome than dangerous, but that’s easy to say when you’re sitting on your butt watching from outside the strands.

Neither landed a truly big shot, but each scored with solid punches in a competitive contest. The 5’8 Brodnicka kept moving and used her height advantage and 68-inch reach well for most of the match, but Gontaruk made her pay when she leaned in too far. Brodnicka repeatedly backed her foe to the ropes but couldn’t keep her there when good trading ensued.

What matters most is that the bout was hard fought, entertaining for the crowd, and a credit to both women.

Official attendance numbers were unavailable but it looked like plenty of fans were there. Judging from the ongoing Polish newspaper and television coverage Brodnicka enjoys, it’s probably safe to assume that viewership for her Tymex Boxing galas is pretty solid.

Whether or not Brodnicka and her team decide to reach beyond that comfort zone remains to be seen. Her immediate fighting future will probably be clearer after Mayer’s upcoming St.Patrick’s day fight against Melissa Hernandez in New York, depending upon the continued impact of the Coronavirus.

Somewhere down the line fans can probably count on Brodnicka to make a considerable step up from her recent opposition which was respectable but not too much of a threat. If that indeed means Mikaela Mayer, another successful defense for “Kleo” is much less likely.

“I am currently the only Polish boxer with a world championship title,” observed Brodnicka. “I feel that is a great responsibility. I work hard and wisely, so as not to disappoint those who count on me.”

She shouldn’t forget one of boxing’s harshest truths: somebody always gets disappointed.

Writer Phil Woolever is based in Europe and is a correspondent for thePrizefighters.com.