Adventures in 2020: Mikaela, Melissa, Claressa and More
Written by: David A. Avila 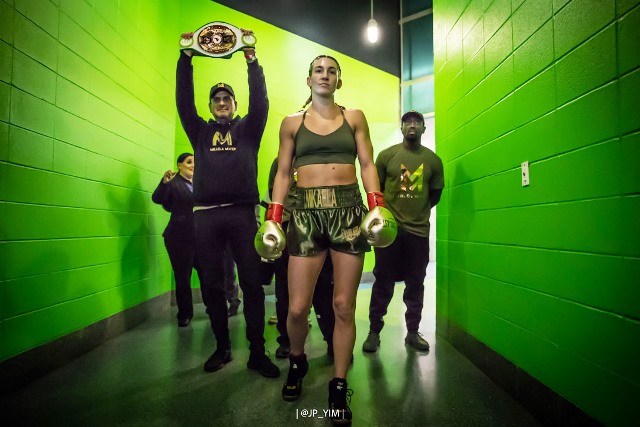 Welcome to 2020. It took a mere three months to discover this will indeed be a year to remember.

It was abruptly postponed due to the dangerous spread of the Corona virus.

The worldwide concern with the contagion has snuffed out many boxing cards around most of the world except south of the American border and in Africa. So far those areas have not been affected.

Mikaela was set to pit her multiple fighting skills honed by years as a top American amateur against one of the older guard in Hernandez.

It was new wave versus old school and many fans were intrigued by the match including the participants.

Now Hernandez has placed herself smack in the middle of contention for the super featherweight title. She was contracted to meet Mayer at the Hulu Theater Madison Square Garden but fate has intervened and the fight was postponed.

Who knows if they will ever meet?

According to Top Rank, who has Mayer under their banner, the Southern Californian has the inside track and mandatory fight against WBO titlist Ewa Brodnicka. But, only if she defeats Hernandez.

Mayer has the tools to become one of the dominant world titlists. But her most difficult task might be against the Melissa “Hurricane Shark” Hernandez who has more than a decade’s knowledge scrapping against the best of the old guard – talented fighters like Layla McCarter, Jelena Mrdjenovich, Chevelle Hallback, and Marcela Acuna. All are considered current or former top 10 pound for pound fighters.

Many of the old guard still remain active and ready to pull the carpet from under one of the young guns.

These are exciting times if we can get boxing back on schedule.

Last week it was formally announced Shields will clash with Canada’s Marie Eve Dicaire in a battle of undefeated super welterweight titlists. Shields has the WBO and WBC titles and will fight Dicaire for the IBF and WBA belt. They will hopefully meet May 9 in Flint, Michigan.

“Fighting against undefeated IBF 154-pound champion Marie-Eve Dicaire continues my quest to fight the very best in women’s boxing. And headlining on SHOWTIME again will continue my goal to lift women’s boxing to new heights.  I’m going to give Flint and fight fans all over the world a night to remember on May 9,” stated Shields.

Dicaire, 33, is a tall southpaw boxer from Quebec who has yet to taste defeat. She has held the IBF version since 2018 when she defeated Chris Namus of Uruguay by decision. It will be her first time fighting outside of Canada.

“For me, this is a dream come true. I will be prepared the best I can be and I am ready to leave everything in the ring to win the fight,” stated Dicaire.

On Saturday March 21, super bantamweights Yamileth Mercado (15-2) and Catherine Phiri (16-4) meet 10 rounds for the WBC world title at Chihuahua. Mercado is making her first defense of the title. Phiri is a former bantamweight world champion.

Sofya Ochigava (3-0) won by technical knockout in the fourth round against Angela Cannizzaro (6-7-1) on Thursday March 12. The lightweight fight was held at Kazan.

Kanyanat Chotchun (3-2) knocked out Arada Boonmami (0-2) in the fourth round on Friday March 13. The bantamweight fight took place at Bangkok.