Inside the Minds of World Champ Jessica McCaskill and Rick Ramos
Written by: Felipe Leon 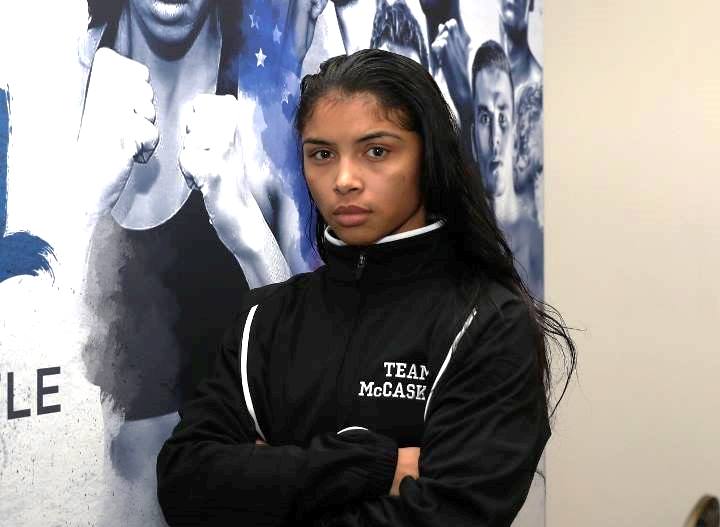 It doesn’t happen very often and much less in female boxing but there can’t be a bigger fight than when you face two unified world champions against each other and that’s what you will get when Jessica McCaskill faces Cecilia Braekhus.

Currently there are six female world champions who own two or more of the four major sanctioning body world titles.  Originally scheduled for later this month we must now wait for the rescheduling of the mega fight between the undisputed queen of the welterweight division Cecilia “First Lady” Braekhus (36-0, 9KO) against the current WBA and WBC super lightweight champion Jessica “Caskilla” McCaskill (8-2, 3KO).

Despite McCaskill, 35, having only a third of the number of Braekhus’ fights as a pro, the majority of her opponents have been at the world-class level.  She stepped up into the world scene in December of ’17 when she lost a hotly contested unanimous decision to the current lightweight champion Katie Taylor.

It hasn’t been easy for McCaskill.

Her great aunt adopted McCaskill at an early age and tough economic times forced them to live in the back of a church.  She moved to Chicago, Illinois, from her hometown of St. Louis.  Through her perseverance she earned a degree and now works as an investment banker.  In 2012 she discovered boxing and after a short amateur career where she captured two national Golden Gloves she turned pro in 2015.

“I am definitely go-getter, I had to hustle and grind to find a gym.  It took me nine months to find a gym when I moved here from St. Louis,” McCaskill told the all-female boxing podcast 2-Minute Round.  “I would find different gyms on my running route and I would go in and they would say different things like, ‘we are a MMA gym and we don’t really have boxing here,’ or they would say, ‘you can box here but we don’t actually train people.’  There were a lot of people that wouldn’t return my phone calls or emails and Rick was the only one that did.  I just needed one yes and I took a whole lot of no’s before that, I just needed that one yes.”

Rick Ramos, McCaskill’s manager and trainer, is the owner and operator of Body Shot Boxing Club in Chicago.

“I had opened up my own gym and for whatever reason it was, I had more female fighters than guy fighters at the time,” Ramos said of how he came into contact with his world champion fighter.  “I didn’t have a lot of fighters.  I threw an all-female amateur show, this was six years ago.  She e-mailed me.  She said she had just moved here from St. Louis and she wanted to fight.  I mentioned to her if she didn’t have a corner, I would work it for her.  I put her as the main event.  She beat up a girl that was just about to turn pro.  She gave her four standing 8-counts I believe.  It was a great fight.  Jessica kind of barged-into the Chicago boxing scene and it has been all business from that day on.”

Along with her relentlessness, McCaskill attributes her lack of fear for the reason she has been able to climb to the top of her sport in such a short time.  “I used to climb up top of the house and sit on the roof.  I wanted to ride all the rides that I wasn’t tall enough to ride.  I grew up with three older boys in the house and that makes you fearless.  It is fun being fearless.  Rick will bring in more experience fighters to train with, spar with and we go through it. Like I said, we are always hustling so when it is fight time, that is kind of the easy portion.”

With McCaskill taking care of business inside the ring, Ramos takes care of it outside of it.

“I try to put my fighters in a no-lose situation,” Ramos said of his managerial style.  “I think I do a good job of promoting my squad and elevating their careers no matter if they are local or on a world’s stage.  If you look at the Katie Taylor fight, nobody even knew Katie.  Nobody knew her which made her scary and I saw an opportunity and everybody was sleeping on the opportunity.”

I started making my plea to get that fight and we got that fight,” he continued.  “Jessica bought a house.  There was no way we could lose in that situation.  In the situation we are now, the unified 140-pound champion, we are going to go up to fight a Hall-of-Famer unified welterweight champion, we are getting the biggest payday of her (McCaskill) career, so in a lot of ways, if we win this fight, it locks her position in the female boxing Hall of Fame.  If she loses, we just go back to 140 and defend her belts and that is what I am talking about, this is a no-lose situation, the Katie fight bought Jessica the house, the Cecilia fight will pay it off.”

For the fight against Braekhus to materialize, Ramos had to maneuver around a certain set of circumstances that according to him took time as well as a series of right decisions to get McCaskill’s biggest fight to date.

“This happened maybe about a year and a half, maybe two years ago, her (Braekhus’) publicist, who is from Chicago, reached out to me, Cecilia was interested in bringing in Jessica in for sparring,” Ramos explained.  “They offered to bring us over for about a month.  Jessica asked what I thought; I told her that I thought we should pass.”

At that point Ramos was sure that at one point or another in the future, the two would meet.

“Tom Loeffler had actually offered us the fight against Cecilia for the last HBO fight,” he continued.  “The money was almost there and Eddie Hearn called me and asked me what I wanted to do.  I was honest and told him at that time I didn’t really want the Cecilia fight right now, I want a home for Jessica. So I asked him for a five-fight deal.”

Ramos let the offer from Loeffler expire.  Soon thereafter McCaskill signed a deal with Eddie Hearn’s Matchroom Boxing that led to her fighting and winning the WBA and WBC world titles.

“We plan to upset her,” Ramos said of the fight against Braekhus.  “A victory over Cecilia would put Jessica, in my opinion, in the female boxing Hall of Fame for sure and that is what we are gunning for.”

When the fight does happen McCaskill is confident she knows the strategy the 38-year-old undefeated Braekhus will bring.  The scheduled 10-round fight will be at a catchweight of 145 pounds with only the welterweight titles, WBA, WBC, WBO and IBF, held by Braekhus in play.

“I expect her to come forward, with her fighting me she will want to make sure she puts a stamp on anything that she does,” McCaskill said.  “It is just a matter of whatever game plan she has if she is able to keep it.   We are going to keep our same game plan as far as training at our highest level and making sure I am ready on all aspects.  We are keeping our same game plan of being as aggressive as we normally are.”

A win over Braekhus would definitely raise McCaskill’s profile to an even higher level but in the super lightweight division, she might still have some unfinished business.  Mary McGee, the newly crowned IBF champion in the weight class, has made it a point to not only call out McCaskill but also revealed there is no love lost between them.

“Yes, definitely,” Ramos answered when asked if he would be interested in a unification fight against McGee.  “I would like to deliver Mary McGee’s biggest purse of her career.  I can help two girls from the same area get the biggest purses of their career.  If Jessica beats Cecilia, knocks out Cecilia, chances are we wouldn’t go after Mary McGee; we would have to do the rematch with Breakhus and then look for the rematch versus Katie Taylor.  She (McGee) has to get her marketability up but if the time, situation and money is right, then we would fight anybody.  They have to keep their marketability up, keep winning and we’ll see what happens.  If we beat Cecilia, maybe Claressa comes down.  I’m not really thinking of Mary McGee.  Those are the names I am looking for, I am not looking for anybody behind us, I’m looking for people that are in front of us.”