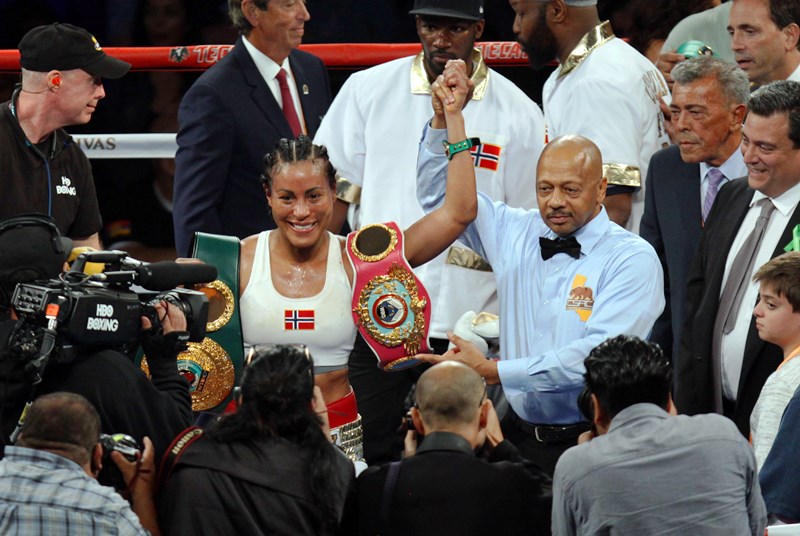 According to the undefeated, unified and undisputed welterweight champion Cecilia “First Lady” Braekhus there are worse places to be stuck at than Big Bear, CA.  The idyllic snowy mountaintop village, 60 miles east of Los Angeles, has been her home for the better part of three months.

If COVID-19 didn’t exist, Braekhus (36-0, 9 KOs) would have been making her way to Oxon Hill, MD, to defend all her titles against the current unified light welterweight champion Jessica McCaskill (8-2, 3KO) live on DAZN.

The fight was scheduled for this upcoming Friday but as of now there is no new date.

“I came here at the end of January,” Braekhus said with a laugh in an exclusive interview with the 2-Minute Round podcast.  “It has been a couple of months now but I am not complaining.  There are worse places you can be under these circumstances.  There isn’t a lot of people up here and also the nature and the mountains remind me of home.”

With the fight against McCaskill postponed for the time being, Braekhus admits the intensity of her workouts has been reduced but is still focused on the task at hand along with enjoying her time in the mountains.

“We will continue to keep up conditioning and our strength up and just staying ready for when the next fight date will be announced,” she said positively.  “We are staying ready here.”

“We are doing other stuff.  I am just having fun now. I am going on social media,” she revealed.  “I am watching everybody putting up content.  I am trying new exercises and just having fun, staying active and strong, mentally also.  I just think this is the time you have to stay positive and open for new things.  As a sport person and especially in boxing, we are a little more used to this kind of situation with fights getting pushed back or cancelled.  Mentally we are very strong and prepared for that.  We just have to continue to stay positive and be able to adapt to the situation.”

With Golovkin, Sanchez is given the credit for developing the current IBF middleweight champion’s style to a more aggressive come-forward technique.

What is generally called in the boxing world as the “Mexican-style.”

At an age when most fighters look more for ways to prolong their careers, the 38-year-old Braekhus turned to Sanchez to develop her more assertive side.

“We all know Abel’s style and what he wants to do with his fighters,” Braekhus explained.  “Of course I am not going to fight like Golovkin or change my style completely.  I still have a lot of skills so it is just adding to what I already got and making me better.”

Hints of Sanchez’s influence were seen in her last fight against Bustos but Braekhus, a professional for 13 years, knows it will take more than one camp with Sanchez to truly see some changes.

“We both have been doing this for a long time,” Braekhus said of Sanchez and her.  “We know that you can’t change a boxer in a couple of months.  There was some things I was able to get out in our first fight, but I think my next fight and my fight after that is where we will see more of Abel’s influence.”

Many believe if there was a fight Braekhus would need a more aggressive style is in her next one.  The slightly younger McCaskill, the owner of the WBA and WBC 140-pound straps, is a hungry member of the new wave of female fighters.

If Braekhus is working on developing a more aggressive style, many say McCaskill needs to work on reining hers in since she is all-out all the time inside the ring.  Her style has helped make her the unified champion of her division in only ten fights.

“I know it is going to be a fireworks of a fight because Jessica McCaskill is going to come with everything she has,” Braekhus said of her next opponent.  “She always does that in every fight.  This wouldn’t be different.  We know that she will push from the first second but I think with me having some new tricks up my sleeve along with the skills I have before, I am pretty sure I’ll be victorious.  It is not going to be an easy fight at all; it is going to be full of fireworks.  It is going to be very entertaining.”

Braekhus would have to wait to provide those fireworks inside the ring for the time being but not too long ago she provided some fireworks outside of it.  In a meeting with retired fighter Laila Ali, Braekhus took the time to take some shots at none other than Claressa Shields.

It is no secret Shields calls herself the GWOAT, the Greatest Woman of All Time.  In a social media post that made its way around the female boxing world, Braekhus accompanied a photo of Ali and herself with the caption, “It was great to meet Laila Ali today, the real GWOAT.  Respect for everything she accomplished!”

No surprise Shields didn’t take kindly to the remark.

“I had just flown in from Norway and had a couple of days to relax before heading up to Big Bear,” Braekhus explained of her meeting with Ali.  “We have been in this game since before women were allowed to go to the Olympics, so we talked about how things have changed from night to day.”

With more time on social media, Braekhus has not been shy to mix it up with fans, media but especially with Shields in a couple of recent back-and-forth verbal blasts between them.

Shields has been very vocal of wanting a fight against Braekhus, the sooner the better, to finally prove who is the better between the two and in a sense, in female boxing.

Braekhus states it is not that easy.  According to her, it is more of a matter of the dollars making sense.

“I am not going to go down in salary to fight Shields,” she said.  “That is obvious.  What she says, she can go off on me on Twitter as much as she wants, this is all about the financial part.  If she really, really wants this fight she has to go back to her bosses at Showtime and tell them she needs this fight and they need to put the money there to make this fight because right now I am with DAZN and I have some big fights ahead of me.  The next fight against McCaskill, then Taylor or Serrano, I think we can break glass ceilings when it comes to women’s salaries.  I am very excited about that.”

With her fight against McCaskill set at a catchweight of 145 pounds, a weight Braekhus says she can make without a problem, the longest reigning undisputed champion in female boxing says she is open to maybe even going lower in weight without actually publicly committing to it.

“I am willing to negotiate,” she said as she carefully chose her words.  “If everything goes as planned in my fight against McCaskill and Katie Taylor against Amanda Serrano, it is going to be huge.  If it would be against Katie Taylor on a global scale, it would be the biggest women’s fight no doubt about that.  A fight against Amanda Serrano, it would be huge.  Not only would it be big with the people that would be seeing it worldwide, but also it would be a financial jump for all the ones involved which it is much needed right now for women’s boxing.”

One fight that might not be on the horizon is a fight long-time female boxing fans for years have been longing for is a match with Layla McCarter.

“We’ve been in discussion with her but we have not come to any agreement at all,” Braekhus answered when asked about one of the best, Layla McCarter.  “From our point of view we can continue discussing that.  She was asking for way too much so we had to move on.  It was before the last HBO fight.”

“We’ve been in discussion with her several times,” she continued about McCarter who at one time was her mandatory for the IBF crown.  “The first time was back when I was a new fighter with Sauerland Promotions.  My promoter negotiating with her team and couldn’t come to an agreement. I think we have discussed, been in contact with her, three or four times all together over the years and we have not been able to get something in place.”

To listen to the complete unedited interview, please visit BlogTalkRadio.com