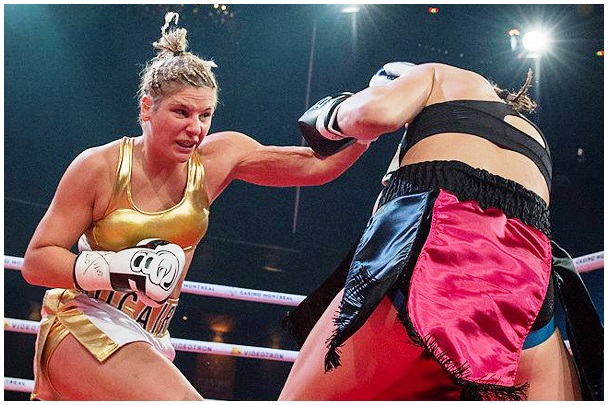 As the sports world, and particularly boxing, looks for ways to get back to normal amid this pandemic, one of the most anticipated fights of the year is still looking for a date.  Without COVID-19, this past Saturday we would have witnessed the unification world title fight between current WBC and WBO world champion Claressa Shields (10-0, 2KO) against IBF super welterweight champ Marie Eve Dicaire (17-0) of Quebec, Canada.

The fight would have taken place live on the Showtime network from Shields’ hometown of Flint, Michigan.

And what are the chances it will still take place?

“We have to see what the government decides about all the measures that are being taken right now to fight against the virus,” Dicaire said recently to the 2-Minute Round, the all-female boxing podcast.  “For the moment the priority is the safety of everyone so we are going to wait for the government measures to be over and then we are going to find a date.  I still stay active, I still box, I still train because I think as soon as we get the ok this fight will be one of the first ones to be scheduled.”

The scheduled 10-round contest marks the first time as a professional Dicaire fights out of her country of Canada with most of them around her hometown of Quebec.

“I think because my promoter wanted to build something big in Quebec,” she explained of why it took so long to fight in the USA.  “He wanted to have for me a good experience because going into the U.S. can be a huge challenge but can be very good for my career.  You don’t have many chances to impress so we wanted to make sure we were ready and we will get there once we were really ready for it.”

Some might think facing one of the most accomplished fighters on the planet in her home turf is a big task, but Dicaire feels she has the right tools to be ready.

“That is going to be a huge challenge but we are equipped mentally with a sports psychiatrist who is well-known for working with a lot of Olympic athletes so that helps me a lot,” she explained.  “Also I am fortunate enough to have a background in amateur boxing and karate as well so I have been traveling all around the world since I was really young.  I have been to Italy, France, Spain, I have been to the US many times before so I think all that together will get me ready to face Claressa in her home town.”

It has been a long road for the 33-year-old Dicaire to the biggest fight yet of her career.  Dicaire began learning karate at the tender age of five and by 11 she was a black belt Canadian national champion.  Despite her experience in combat sports, it wasn’t until her early twenties Dicaire found boxing.

“I was 24-years-old, I was involved in martial arts for a long time,” Dicaire stated.  “I was five when I started martial arts.  I was watching the Olympics games on TV and I realized I really wanted to be part of the Olympics and karate was not an Olympic sport.”

“One of my friends said it as a joke to me, ‘well, you have two choices, taekwondo or you go into boxing,’” she said with a laugh.  “So I thought I could punch much better than I can kick so I am going to start boxing.”

After a short four–year amateur career where Dicaire amassed 50 bouts, an injury killed her Olympic dreams.  “I was doing good in the amateurs and I got an injury.  My goal was to go to the Olympics but with this injury I was out of the ring for a year.

“I missed all the qualifications for the Olympics so I had to decide whether I would stay in the amateur program for another 4-5 years or I would do the step up,” she continued.  “I decided to go pro to have more challenges because I didn’t want to stay 4-5 years as an amateur to wait for another Olympic cycle.”

Dicaire went pro in late 2015.  Soon after she realized the boxing ring was where she belonged.

“The first time I put on professional gloves, the feeling I felt in my hands, I looked at my coach and said, ‘coach, she is in trouble.’ But he said, ‘don’t forget, she has the same gloves as you so protect yourself,’ she said laughingly.  “I like the pressure, I like the feeling of giving a show, I like when fans are there to scream, to cheer, so being in the ring as a professional is so much different than an amateur.”

“I found that this was my place,” she stated confidently.  “I used to love boxing a lot but getting into the preparation of a professional fight where you can only focus on one opponent for several weeks or several months, getting ready for this big night, this big event, and having people cheer, it really felt like this was my sport, this was my place.”

Since her pro debut Dicaire steadily built a respectable resume defeating a number of known names, most of them international opponents, as she climbed the ranks.  She faced Paty Ramirez twice, Lisa Garland, Yamila Reynoso and Alejandra Ayala twice among others before she received her world title opportunity.

“I am satisfied with the level of opponents I have faced since the beginning of my career,” Dicaire said.  “I think they have put in front of me a lot of good opponents with a lot of experience, a lot of knowledge.  Most of the time I was the one with less fights, with less experience.”

“Going up in weight also has been an issue because at amateur I was fighting at 140,” she revealed.  “To be able to go to 154 and face bigger, stronger girls, I had to adapt to that.  Every fight was a lesson I had to learn.  I am pretty happy about it but I also believe in the future a lot of good fighters are going to come from amateurs and they are going increase the level of pro boxing for sure.”

In December of 2018 in her hometown of Quebec, Dicaire defeated Uruguay’s Chris Namus for the IBF strap via a unanimous decision with scores of 97-93 twice and 96-94.

“I would say my world title fight, when I won my IBF world title against Chris Namus,” she answered when asked her most memorable win as a pro.  “Most of my fights I used to be winning all the rounds, being ahead in the scorecards but for the first time in my career after the third or the fourth round, I was behind.”

“I had to work with my coaches to find a way to win all the rounds, to adapt the strategy, to adapt,” she explained.  “I had to dig really deep to be able to do that and at the end the result was a victory.  I think it is like my best moment because the feeling of digging so deep, working so hard and at the end walking out with the world title, it was amazing.”

With the win, Dicaire became the first female boxing world champion from Quebec, which has given her the chance to make a difference in her community.  “For me I box because I love boxing but also to inspire people to achieve greatness.  I was able to go to schools to talk to people and get people to have faith in themselves, to believe in their dreams.  It was a very good feeling.”

She credits her desire to make a difference as well as her drive to the strong women in her family and the lessons she has learned since a young age.

“I was born with it but I was also taught by my mom, my aunt, my family, we are always achieving,” she said.  “You start something, do it your best.  My mom, my aunts, they showed us that from very young so when I go into martial arts, my karate teacher was the same.  I think I was taught that very young so it just got into me so now as an adult, I don’t even think, I do something, I do my best and I give it my all.”

Now she needs to put it all together for her pending fight against Shields.  One advantage Dicaire might have is the fact she is a southpaw, a style Shields does not have much experience against in the pros.

Dicaire surprisingly does not agree.

“I think it can be an advantage if you put it that way but I am pretty sure Claressa will be well prepared for that,” She said.  “I think it is going to be a really good challenge.”

One weapon the current IBF 154-pound does think might make a difference has been demonstrated in the past, it is her speed.

Shields has speed and Dicaire has speed. Who blinks first?