Best of the British Isles – Katie Taylor, Terri Harper and More
Written by: David A. Avila 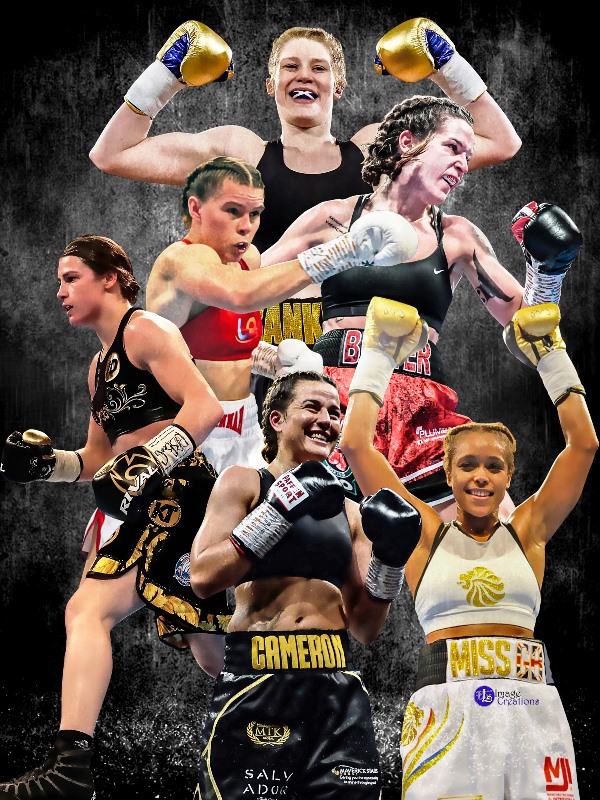 Meet the Best Women Prizefighters from the British Isles

Fighting in German arenas was the dream of every female boxer from Japan to Mexico for several decades. But in the past 10 years other countries the world over have joined the party to celebrate women’s prizefighting.

Led by powerful promotion companies the sleeping giant that is women’s prizefighting has a firm foothold throughout Europe with female fighters emerging on fight cards on almost every country on the continent from Poland to Greece.

No country has benefitted more from this renaissance than the United Kingdom and Ireland with numerous female fighters ranked and ready for battle.

Here is a list of a few to take notice:

Starting with Ireland’s Katie Taylor, 33, the lightweight and super lightweight (15-0) is not British but she fights for England’s Matchroom Boxing so we include her with the Brits. She is among those spearheading European boxing and has kept her place atop the precipice of the lightweight division. Now she is encroaching on the super lightweights and could be headed toward a showdown with Cecilia Braekhus the welterweight queen from Norway. It doesn’t get bigger than that. Among her greatest feats were victories over Jessica McCaskill, Eva Wahlstrom and a close disputable win over Delfine Persoon. The Irish fighter from Bray is a human buzz saw. Next on her hit list is a fight date against New York’s Amanda Serrano the seven division world champion. This could be the biggest fight in female boxing history. Should she survive against Serrano then matches against the winner of the Braekhus versus McCaskill fight loom next. Lots of possibilities for Taylor.

Terri Harper 23, super featherweight (10-0) is much taller than 5’5” that is listed on BoxRec. She seems more like 5’8 or 5’9. When she defeated Eva Wahlstrom to capture the WBC title she seemed much taller than the Finn and used it to her advantage. Of all the top British fighters she is the youngest by far and could become a force for years to come. She has a lot of room to improve but already possesses that X factor a knockout punch. Yorkshire’s Harper has yet to be tested by the Americans which are loaded with super featherweights, but her win over Wahlstrom was a very good testament of her ability to overcome more experienced fighters. Harper has quickness, agility and strength. All she needs is a little more experience and she could possibly be a dominant force in the super featherweight and lightweight division. Harper is smack in the middle of female boxing’s deepest divisions. Potential showdowns with Ewa Brodnicka, Maiva Hamadouche, Delfine Persoon, and of course Mikaela Mayer await her. Lately, Mayer and Harper have been shredding each other via social media. Nothing like America versus United Kingdom to stir the pot.

Chantelle Cameron 29, lightweight (12-0) recently defeated Argentina’s Anahi Esther Sanchez by decision after 10 rounds and managed a knockdown. Sanchez had previously fought and lost to Jessica McCaskill and Katie Taylor so she proved to be a litmus test for Northampton’s Cameron. It was her biggest win yet as a professional and places her among the contenders to replace Taylor as the lightweight champion who seems to be moving up a weight division or two. Cameron’s other notable wins were over Myriam Dellal and Viviane Obenauf. Her lengthy amateur experience has allowed her to jump into the lightweight fray immediately. She also has experience as an amateur fighting Katie Taylor. But Ireland’s Taylor is looking for big paydays and Cameron has not attained that kind of status yet. All Cameron has to do is wait for some of the super featherweights to grow into the lightweight division. She has a little time to wait.

Savannah Marshall 28, super middleweight (8-0) has the distinction of being the only boxer with a victory as an amateur over Claressa Shields. But that was in the amateurs. Prizefighting is an entirely different sport. Along with fighting for 10 rounds there is no head gear and defense is more important than offense in the professional level. Though Marshall is known in Great Britain as the boxer to defeat Shields, no one outside of Europe knows Marshall. The ability to sell tickets outside of England has not been proven by Marshall and that means she will not be fighting Shields any time soon. She has wins over Sydney LeBlanc and Alexandra Ayala and needs to face more top contenders to raise her profile. Most experts consider Marshall good enough to fight for a world title now she just needs to raise her profile outside of Europe. Once that’s accomplished the big money fights will arrive.

Hannah Rankin 29, super welterweight (9-4) hails from Scotland and is a former IBO titlist with a proven track record for fighting ability. Despite losses to Claressa Shields and Alicia Napoleon she exhibited a crowd-pleasing style and continues to show improvement. Her defeat to Patricia Berghult for the WBC and IBO world titles was a minor upset but she can rebound quickly in a division ripe with an abundance of talent. She is currently promoted by Salita Promotions who also guide Shields. It’s a good position to be in. Plenty of possibilities await the Scottish fighter including fights with Hanna Gabriels,

Natasha Jonas 35, super featherweight (9-1) is set to face Terri Harper when things settle down in Europe. Jonas fights out of Liverpool and was upset by Viviane Obenauf two years ago. Is it too late to learn from her mistakes? That’s the question when she meets Harper in a showdown perhaps this summer. Words and taunts have been exchanged in this all-England battle. It’s a tall task for Jonas who at 35 does not have time to waste.

Fighters from the British Isles are making serious waves in women’s prizefighting thanks to more media interests and promotion companies diving into the sport. By next year all of those mentioned will be engaged in pivotal battles worldwide not just in their homelands.