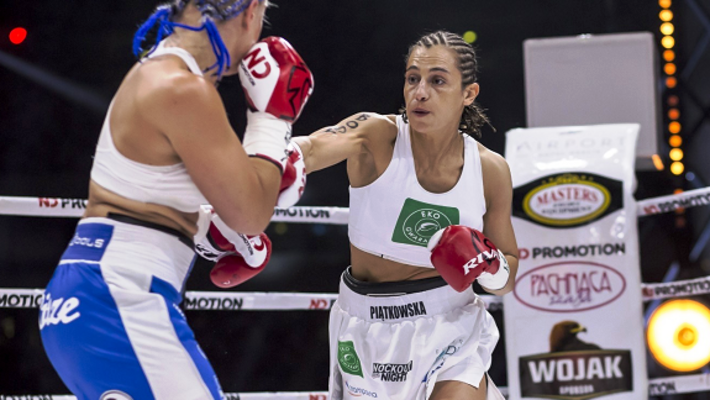 Despite tasting some success in their home country many fighters, male or female, always look towards the United States as the “Promised Land.”  That is no different for former WBC super welterweight champion Ewa Piatkowska (14-1, 4KO) of Poland.

“I just need a visa special for fighters, I have my tourist visa for the U.S.,” Piatkowska said in perfect English to the 2-Min Round podcast.  “After my next fight on July 25th I hope there is something for me in the U.S. because that is where I want to go and show my skills.”

Piatkowska learned English in high school and perfected it by attending a college in the United States.  After spending a couple of years in a small town in central valley California and gaining some weight eating all the fast food the United States had to offer, the natural athlete Piatkowska found her way to a boxing gym.

“I was about 26 pounds heavier than when I left so I decided to lose and that is how I ended up in a boxing gym,” she shared.  “I had not watched boxing before but I wanted to try something new because I have always been interested in different kind of sports.  I played basketball in high school and in America I tried soccer.  When I came back I wanted to try something different.”

After trying a white-collar type of boxing class and being bored with the redundancy of the exercises, Piatkowska eventually found the attractiveness of the sport once she began to spar and discover her skill.

Piatkowska left the sport in her mid-20s after three years as an amateur when there was no future for professional female boxers in Poland.  She tried her hand at Rugby of all sports, exceling at it and even making the national team while being named Player of the Year in 2012.  Once she started missing boxing, she went back to the gym and made her pro debut in early 2013.

The 35-year-old Piatkowska, known in the ring as the “Tigress” jumped onto the international stage by capturing the vacant WBC 154-pound in the fall of 2016 with a fellow Pole Aleksandra Magdziak Lopes.  Piatkowska made a steady rise to that weight from her natural weight class of super lightweight.

“It is not like I am cutting to this weight because I was always naturally around 140 lbs., she explained.  “When I started my career I was fighting at super lightweight and I never cut weight.  Then came the opportunity to fight for the European belt at 147 and I agreed because I was never afraid of bigger girls, I know I can punch and I know I can take a punch.”

“After I won came the opportunity to fight for the WBC belt,” she continued.  “Fighting for that belt was always my dream.  I didn’t even think about it for longer than minute.  I had to balloon up to match them in that division.”

Piatkowska defended the coveted green and gold belt twice with decision wins over Maria Lindberg and Ornella Domini.  After her last defense, Piatkowska was not able to secure another fight for nearly a year, which led to the WBC stripping her of the strap.

Now the former champion is looking to challenge for the title in her natural weight class.

“140 lbs. is my favorite weight class,” Piatkowska reiterated.  “I don’t think cutting is wise, boxing is dangerous already and I don’t want to make it more dangerous by dehydrating.  I never cut weight like boxers do.  When I fight at 140, I walk around 139 so this is my natural weight class and I don’t have to do anything to get to it.”

“I know Karina, we fought back in 2016,” she revealed.  “I knew the best way to fight her was to use footwork because she likes to jump in with punches.”

As soon as Piatkowska stepped into the ring she noticed the ring, the smallest available for professional boxing in Poland, wasn’t going to allow her to box around so she decided to change her tactic.

“I knew that I was stronger than her and wasn’t risking much because I knew her well,” she explained.  “I know it wasn’t my best fight but I couldn’t expect much after such a long break.”

Her fight against Kopinska was her second in as many years.  In her last fight prior to Kopinska, in July of last year, Piatkowska defeated Kamilla Boka in six rounds via points.

“It was in a hotel, there was just a few people, there was three tables,” Piatkowska answered when asked of the conditions of her fight during Covid-19 quarantine.  “It was a very small audience but we heard them anyways.  I am going to fight now on July 25h but we are looking for a place because we are going to fight probably without the audience or with a tiny audience.”

“It might be at a TV studio, on Polish TV,” she continued.  “They did it a couple of weeks ago with kickboxing, just a camera man and no other people whatsoever.  It is a kind of weird because you don’t hear the cheering and you can hear everything so clearly including what the opponent coach says.  I don’t mind, I am so happy to fight because I had such a long break.  I am taking every opportunity to get back in the ring.”

According to Piatkowska, Poland is ahead of the U.S. in flattening the curve with many establishments opening back up with out any major incident.  “We had a few weeks where everybody was sitting at home and everything was closed.  It was almost a month like that but now everything is going back to normal.  The shops are opened, the restaurants are opened and the hotels as well.  There isn’t that many people in those places as usual but everything is coming back to life.  This virus hit everybody, it hit the business and everybody is just trying to earn money, trying to survive.”

“We had some difficulty preparing for this fight,” she continued.  “There was a time in Poland where they closed parks and forests.  “There was no way to stay in shape, to prepare for fights.  There was a few weeks where I was just sitting home doing nothing, I was just doing push-ups and sit-ups.  When gyms began to opening up, we went directly.  I was dying after eight weeks of doing nothing.  I had to adapt.  I don’t think anybody is at their best shape right now.”

One subject that turns the usually sweet Piatkowska venomous is a potential rematch against the current WBO super featherweight champion Ewa Brodnicka.  Back in late 2005 Brodnicka scored a split decision win over Piatkowska, a feat that seems to still be a thorn on the side of the “Tigress”.

“We proposed a rematch after that fight but they are running away,” she said of a potential rematch.  “She is a fraud.  She can’t fight; she should have five losses by now.  She knows in Poland nobody can touch her because of the judges are always on her side, you know how it is in boxing.”

“I hope Mikaela Mayer or Terri Harper face her,” she stated.  “When she goes abroad or is not protected anymore then she will get knocked out.  I think Mayer and Harper are strong enough to do it.  We proposed the rematch many, many times but they always said no.”

Looking past the rematch with all intent and purposes perhaps is never going to happen, Piatkowska looks towards the very top of the female boxing food chain as her dream match up.  “My dream opponent is Cecilia (Brækhus).  She has always been my favorite fighter.  I think she was the first woman I watched in a professional fight.  I would like to catch her before she retires but I know there is a line, she has a fight against Jessica McCaskill now.  Besides her, I would like to meet one of the American champions in Jessica McCaskill or Mary McGee.”

Now Piatkowska is firmly set on conquering the United States with the help of as of now unnamed manager.  “He was pretty close in arranging a fight for me before the virus but then it hit.  We have to wait a few months but now that things are getting back he contacted me and asked me if I was ready.”

One fight that would interest her to slow down her trip to the United States is the opportunity to step in and challenge the unified lightweight champion Katie Taylor in her next fight on August 22nd in England.

“I was thinking about it,” she said with a smile.  “There is two great fights coming up, that one and Brækhus vs. McCaskill so if anybody get injured or get Covid, I can jump in because I am already in training.  Of course I would definitely do it.”