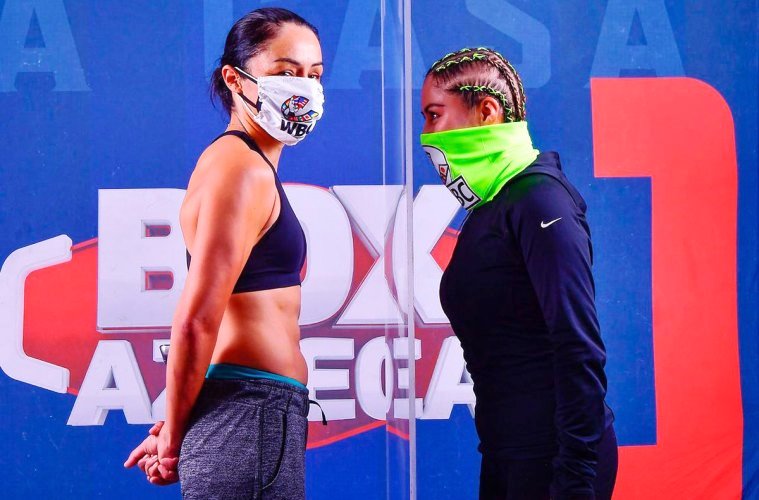 “Estrella is dangerous, I think it will be a good clash of styles,” Nava said before the fight.  “I am happy to be back.  I think she might have a little of an advantage because she is from near Mexico City, she will make weight easier and she is younger.”

The 10-round bout, held at a catchweight of 120 lbs., was the main event of the third fight card presented by Zanfer Promotions from a soundstage in the headquarters of the Azteca network but they have not been free of issues.  The biggest being the fact the Mexico City boxing commission not sanctioning the fight cards. Because of it, officially the result is a “No-Contest” and not the win Nava deserves.

The no-audience platform must have been a surreal experience for Nava, one of the most popular and decorated Mexican female fighters of all time, last saw action in May of last year earning a majority draw against Marcela Acuña of Argentina.  The fight was a much-anticipated rematch of their first face-off back in ‘09 that the South American won in her hometown with a unanimous decision.

“It was an experience to fight under these conditions,” Nava said after the fight.  “I am sure all the fighters have felt the same.”

In her last fight back in October, the career-super flyweight Valverde of Ciudad Neza, Mexico, challenged for the interim WBC 115-pound title coming up short against Sonia Osorio in a unanimous decision loss.

The over-the-year layover for Nava was evident from the opening bell as she tried to shake off the rust with jittery movement.  The much shorter Valverde was content in standing right in front of her opponent at a medium range and looking for the counter attack.

Once Nava closed up the gap with her educated jab, Valverde was not hesitant to engage mainly with a wild over hand right with Nava scoring with straighter punches through the middle.

Early on when Nava would commit to an attack, the awaiting Valverde would score with short hooks from either fist but Nava was able to weather the short storm and score with a hard uppercut to the chin of Valverde.

The affair heated up a bit in the fifth with Nava continuing with her jab but Valverde was a bit more successful in timing it and scoring with a more controlled right hook.  At times Valverde became the aggressor, moving forward looking to turn it into a street fight but Nava remained composed.

Nava scored her best combination at the closing seconds of the seventh with a beautifully timed jab followed quickly with a hard straight right hand flush to the face of Valverde.

The most competitive rounds were the last three with Valverde, clearly behind on the cards, deciding to go for broke and upped the frequency of her forward attack.   Unfortunately for her, Nava had seen it all before and was able to meet the newfound aggression with her own more technical attack.

After the fight Nava expressed her desire in facing fellow Mexican super star Mariana “Barbie” Juarez for the WBC bantamweight title.  The much-anticipated Juarez vs. Nava fight was announced earlier this year for May 9th but because of Covid-19 the fight was scratched.

“That is the fight that was being made,” Nava answered when asked after the bout what fight she wanted next.  “Perhaps against Marcela Acuña, our fights were very close, very good stylistically matched fights, I would like to face either one or maybe both.”