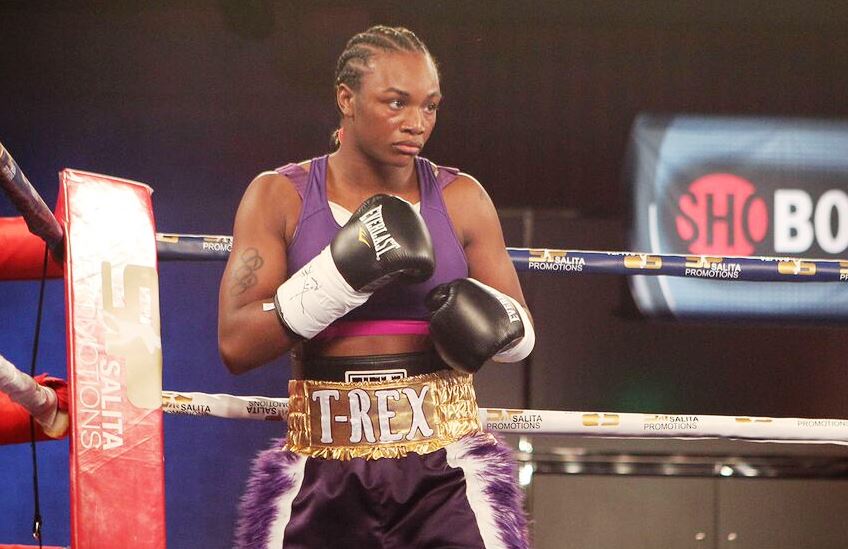 As female prizefighting re-emerges from coronavirus limbo a clarion call to make a change to three-minute rounds has been established by two of the sport’s top performers Claressa Shields and Seniesa Estrada.

Shields and Estrada recently took part in a conference call set up by the World Boxing Association that was celebrating the 99th anniversary of its organization. The host was Hanna Gabriels and one of their main topics was the inclusion of three-minute rounds for female prize fights.

East L.A.’s Estrada currently holds the WBA interim flyweight title that she won by defeating Marlen Esparza in a clash that was held at three-minute intervals, not the usual two-minute rounds.

“I spar with guys at three-minute rounds all of the time,” said Estrada who prefers three minute stanzas too and has been boxing since she was seven years old. “

It’s not anything new.

One of the first to take up the cause was Layla McCarter who actually was also the first female fighter to win a WBA world title when that organization began allowing women to fight for its titles.

McCarter captured the WBA lightweight world title against Donna Biggers on July 5, 2007 in Las Vegas, Nevada. It was the first time a WBA female title fight was held at both three-minute rounds and set for 12 rounds. The fight lasted only two rounds as McCarter won by technical knockout in the second round.

Two months earlier McCarter defended the GBU title against Belinda Laracuente in a fight that went the distance of 10 three-minute rounds in Las Vegas on November 17, 2006.

I attended both of those fights.

Ironically, McCarter never lost that WBA lightweight title which is now held by Ireland’s Katie Taylor. Because of an inability to find fights, McCarter moved up in weight to seek opportunities but actually is a lightweight and super lightweight; though she has won world titles as heavy as super welterweight.

No one knows why or how two-minute rounds were established for women’s professional prizefighting. But the push to change it has been blocked mainly by one organization the WBC.

WBC refuses to allow three-minute rounds. That organization maintains that a doctor from UCLA recommends two-minutes because it is safer than three minutes.

Indeed, boxing is a dangerous sport. But picking an arbitrary number of two minutes instead of three is ludicrous. Is it 2-minutes and 10 seconds that is the red line or 1 minute and 58 seconds? If you ask any medical doctor they will tell you “no boxing” is better than any boxing. Don’t bring doctors into an equation. They are going to support the ban of boxing.

I have many doctor friends and though they love boxing they would advise against anyone partaking in the sport that claims an average of seven lives each year from head trauma.

It’s like race driving. Lives are lost each year in car racing yet people continue to partake in the sport as fans or participants. Is it dangerous? Yes. Do people love it? Absolutely yes. It is the same with pro boxing.

Current WBC and WBO super welterweight titlist Shields has staunchly supported the change to three-minute rounds for female fighters. She also supports 12 rounds for title fights too. She said after her fight with Canada’s Marie Eve Dicaire who holds the IBF version that from thereafter all of her title fights will be three-minute rounds whether the WBC approves or not.

Estrada, who is set to fight on July 24 in Indio, California, has a similar stance.

“Three minute rounds allow for a lot more strategy,” said Estrada who holds an interim WBA flyweight title and can fight as a light flyweight and strawweight. “I love the difference it makes in a fight.”