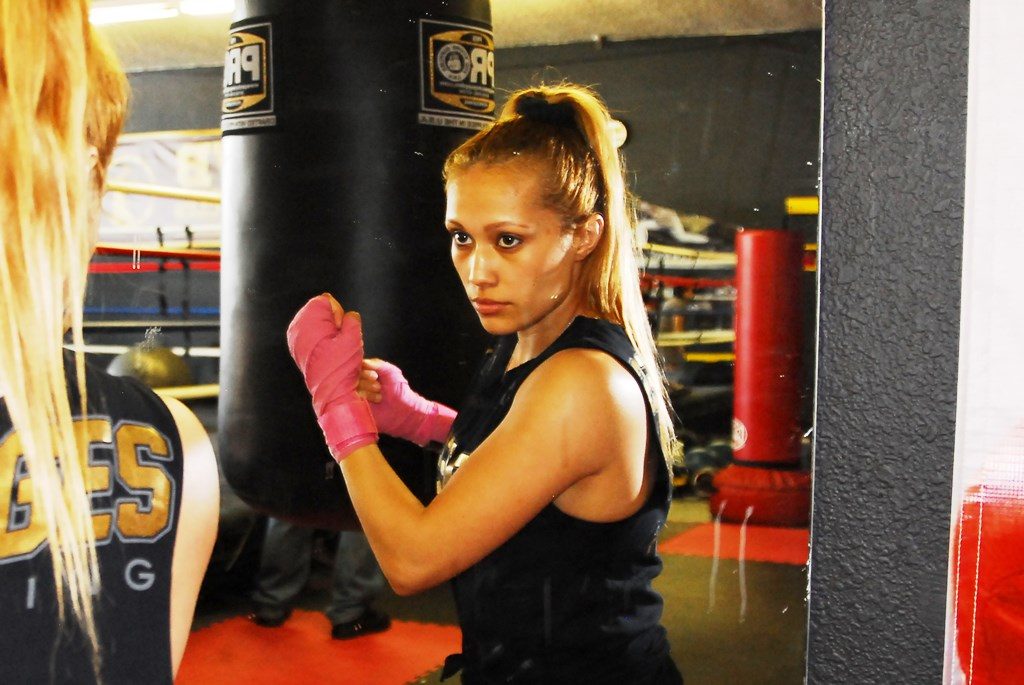 Current interim WBA flyweight and WBC Silver light flyweight champion Seniesa “Super Bad” Estrada (18-0, 7KO) is living on a high right now.  The 27-year-old from East L.A., California, is undefeated with a major promotor behind her, an experienced team beside her and holds two different titles.  She is at the best moment so far of her professional career.  The cherry on top came last November on the undercard of the Saul “Canelo” Alvarez vs. Sergey Kovalev mega fight, Estrada defeated her arch-nemesis Marlen Esparza via a technical decision.

“It was a great experience. Fight week in Las Vegas is different than fight week anywhere else,” Estrada said last week in an exclusive interview with the 2-Minute Round, the all-female boxing podcast.  “Just like the whole atmosphere of it is just crazy, it is just so different.  To have that experience to be fighting in Las Vegas and on the DAZN was great.  I am just glad I was part of one of the biggest fights in women’s boxing for last year.”

The 10-round fight was for the vacant interim WBA flyweight title and was scheduled for 10 three-minute rounds.  A candidate for fight of the year, the all-action fight ended in the ninth when Esparza announced she couldn’t continue due to her vision being impaired from a bloody gash on her forehead.

“It was great, I loved it, I wish I could fight three-minute rounds every fight moving forward,” Estrada said excitedly.  “Unfortunately, that is not how it is for women.  Hopefully I can fight in Vegas again this year and we can make that happen with three-minute rounds.  I wish it would change with every state and I feel like all women should go three minutes.”

One of the obstacles Estrada and other women have in regularly fighting three-minute rounds is the World Boxing Council’s – better known as the WBC – adamant opposition to it.  Although the WBC is only one of the four major sanctioning bodies for female boxing, it is arguably the one that gives the most exposure to their world champions.

“I have no idea why the WBC is so against it,” Estrada explained.  “Sulaiman says he is against it because of health reasons and that they have it get it cleared with doctors or whatever it is.  I don’t know, I just totally don’t agree with that.  Of course, I still want to fight for WBC belts even though they are not for the three-minutes.  Whenever I can fight three-minutes I am going to try to push for it.”

In her head mentally she knew three-minutes would be tough for her and she was trying to make it seem like I was the one couldn’t last,” she continued.  “It played a huge factor in the fight.  Watching the fight again, seeing the way she was walking back to her corner already after the third round, she had her hands on her waist, the legs were getting wobbly and will fall back into her stool.  In the sixth, seventh and eighth was when she was done, gassed out.  Either way with two-minute rounds I still think it would have been hard for her to go 10 with me but the three made it way more difficult for her.”

With nearly all the eyes of the boxing world on that fight card due to the main event, Estrada feels her fight against Esparza is a catalyst for continuing the debate for women to be allowed to fight three-minute rounds throughout boxing.

“I feel I convinced a lot of people; I even convinced Robert Diaz (Golden Boy Promotions’ matchmaker),” she stated.  “I knew with him; he has always been iffy about women’s boxing but now of course I have proven him wrong.  Before they signed me he used to say, ‘Seniesa, she’s too girly, she’s too small, these girls are bigger than her, these girls that look like men, they are going to hurt her. She is not going to last.’  Now every opponent he gives me I’ve proven him wrong.  Now he admits he was wrong.  He didn’t think I would be able to put on such a great fight with three-minute rounds.  He thought I would get tired and the fight not be as exciting.  I know I proved him wrong with that too because he told me afterwards that in the eighth and ninth round I was getting stronger.  He was really surprised and he told me whenever I wanted to go three-minute rounds he would try to make it happen.”

Estrada explains despite getting the win against Esparza, she was disappointed with the way it ended.  “I wish the fight would have gone another round.  Esparza can make all the excuses she wants about the head butt and she couldn’t see.  After the ninth round after I sat down in my stool my trainer said in this tenth round keep your hands by your face and walk her down and let your hands go because you are going to stop her in this round.  I knew it for sure.  She had nothing left. I saw it as the rounds went.”

“I know that in her mind she couldn’t go one more round,” she continued.  “That is why she had to take the easy way out and say she couldn’t continue.  If there is a rematch I would stop her for sure.  Especially with no head butt, she has no excuse to find a way out.”

Despite the continuing animosity between them to this day after the fight, Estrada still finds a way to admit Esparza is a skilled fighter.

“I feel that I have had tougher fights against girls that were heavier than me before signing with Golden Boy.  I had a lot of tough fights with girls that were a lot bigger than me.  As far as toughest fight skillfully, I would say yes because she has just as much experience as I do, especially with our amateur background.  She has been boxing just about as long as I have.  She put up a tough fight but I knew the way I executed my game plan it made it a lot easier for me than what it could have been.”

Estrada expresses that even though she is now months removed from the fight, she has not forgotten all the trash talk that went on between them for years over social media which culminated to a heated face off in Las Vegas where Estrada actually pushed Esparza.

With that chapter closed, at least for the time being, unless a rematch is made Estrada looks toward the future.

“There are a lot of good fighters out there that are world champions at 105, 108 and 112 pounds,” Esparza stated.  “I give myself so much pressure thinking how much I want to look even better in my next fight.  I just want to keep putting on exciting fights moving forward and winning world titles.”

“This year I want to fight at 105 and 108 pounds but I still want belts at 112 as well,” she said confidently.  “Even though that is not my weight class, it is more of a challenge.”

One thing Estrada likes are challenges.

To listen to the whole uninterrupted interview, please visit BlogTalkRadio.com/2MinRound