Mikaela Mayer vs. Helen Joseph in Las Vegas
Written by: David A. Avila 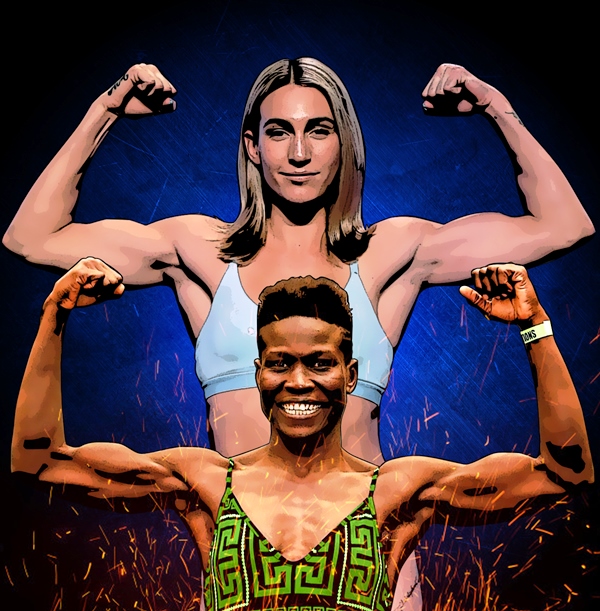 Three times is the charm for Mikaela Mayer.

Southern California native Mayer (12-0, 5 KOs) enters the prize ring as the main event on Tuesday July 14, when she meets Nigeria’s Helen Joseph (17-4-2, 10 KOs) at the MGM Grand bubble in a super featherweight battle set for 10 rounds.

ESPN will show the Top Rank card live. The scheduled main event featuring Jamel Herring was canceled when he tested positive for Covid-19.

Twice before the coronavirus has knocked out Mayer’s previous bouts leaving the 2016 Olympian without a means to make money or practice her art:

First, her bout was canceled back in March when the worldwide pandemic slugged out the entire boxing card. Mayer was poised to meet Melissa “Huracan” Hernandez in a battle between young upstart and experienced multi-divisional world champion.

Second, her Las Vegas 2020 bout against Joseph was shot down when Mayer tested positive and she was pushed out of the casino town faster than a man caught with loaded dice.

“There is no playbook here and were all trying to live in this new future,” said Mayer.

The long-legged Mayer has not fought since late October when she stopped Alejandra Zamora in six rounds at Reno, Nevada.

Now Mayer returns and she has the always eager Joseph who was last seen trading blows with Belgium’s Delfine Persoon for 10 rounds in super featherweight clash last November.

Will this fight prove or disprove Mayer’s talent?

“My division is stacked,” said Mayer about the 130-pound limit super featherweight division. “I originally planned on winning a world title and then going up to135 thinking that’s where the bigger fights were. But this past year changed my mind. I think 130 is a very competitive division.”

One of the wild cards in this division and below has been Joseph.

The native of Nigeria has one-punch stopping power and she is eager to prove herself on the big stage.

“It’s an honor to help bring female boxing back to the airwaves. Can’t wait for the fight,” said Joseph who trains in Connecticut. “I respect her and everything she has done for female boxing. But I am too strong and too tough.”

Mayer welcomes the challenge and the strong words.

“I know she’s tough and she was willing to take this fight,” said Mayer. “She is going to learn.”

For the past two years Mayer has sought a world title fight and was ranked number one by the WBC, but was passed over several times by then title-holder Eva Wahlstrom. Instead, Great Britain’s Terri Harper was given the opportunity and the number 15-ranked fighter promptly knocked down the champion and won by unanimous decision in England.

Mayer had long sought that title and hoped winning it would put her in position to fight Ireland’s Katie Taylor for the lightweight title. But her plans have changed and she intends to make this division home.

“Everyone is unifying,” said Mayer about fighters like Taylor and Claressa Shields who have unified their respective weight divisions and scooped up all the titles. “In my division each of the champions have held it for a while. I want to unify the junior lightweights.”

Joseph has a different goal altogether.

For years since arriving in America the fighter known as the “Iron Lady” has sought to prove she is one of the best female fighters in the world today. She has fought at super flyweight and now feels comfortable at super featherweight. Her battle against Persoon last year proved it.

“Yes, the weight was fine,” said Joseph who had fought several times in the super featherweight limit. “I was strong. More fights at that weight would be fine.”

Both Mayer and Joseph understand that the entire fight world will be watching and many fans not familiar with female prizefighting.

“It’s an honor to help bring back female boxing back to the airwaves,” said Joseph.

After two cancellations this year alone, Mayer eagerly awaits a return to the prize ring.

“I see some big fights being made. Everyone wants to unify,” said Mayer. “It’s suddenly a really hungry division.”

It all starts on Tuesday night in Las Vegas. Let the dice roll.