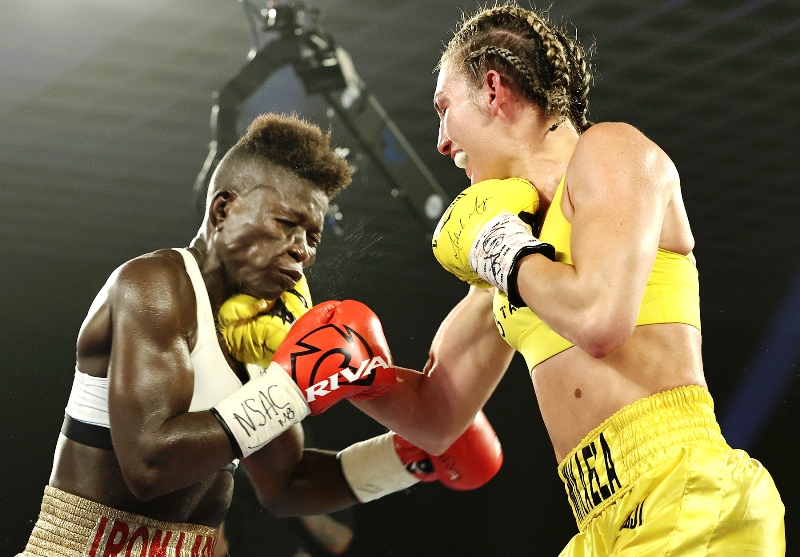 With all eyes riveted on Mikaela Mayer the super featherweight considered the top in her division proved it as she pounded a near shutout over Helen Joseph to win by unanimous decision on Tuesday.

It was never even close.

“She was too slow for me,” said Mayer.

After three failed attempts to get into the prize ring, Mayer (13-0, 5 KOs) finally got her opportunity and unleashed combinations on the ever-charging Joseph (17-5-2, 10 KOs) at the MGM Grand bubble in Las Vegas. It was the main event and she proved worthy.

Behind a long sharp jab that stretched well beyond Joseph’s reach the 2016 Olympian showed her pedigree in dominating the super featherweight clash that many expected to be Mayer’s toughest test.

During the opening round Nigeria’s Joseph connected with a looping right hand but Mayer shot out jabs and followed it up with three-punch combinations that connected often. A short right cross stopped Joseph’s rush cold and gave Mayer an opportunity to unleash more crisp jabs.

Joseph opened up the second round with another looping right but once again Mayer fired off multiple three and four-punch combinations while moving out of range before retaliation. The recipe for success was established.

Though two scheduled fights had been canceled due to the coronavirus Mayer seemed very sharp.

For the next two rounds she seemed to hit Joseph with ease while evading the counters by slipping under and moving around. If Mayer chose she could have made the fight less entertaining, but she dared to fire combinations.

In the fifth round Mayer seemed to take her foot off the gas and that allowed Joseph to boom some left hooks and rights. Joseph also connected to the body toward the end of the round to perhaps win it according to the judges. She was the more effective puncher in that round though Mayer did land some combinations.

The success in the earlier round might have pumped Joseph up and she opened up the sixth round an overhand right and left hook. Though known for her power it was not enough to keep Mayer from retaliating. The tall blonde fighter unleashed blistering combinations including a right uppercut that seemed to take the energy from Joseph. It was a big turnaround.

One unknown factor that Joseph had going into the fight was that she had knockout power and she had a good chin. Mayer however absorbed some big blows and was able to counter with equally big blows and many more.

As both fighters slowed down a bit Mayer used her jab to score points at will and would sporadically drop off three-punch combinations including a few left hook anchors. Joseph took the blows but could not return enough fire to win any more rounds.

“I’m a little offended that you all thought this was going to be my toughest fight to date,” said Mayer to ESPN reporter Bernardo Osuna. “I am one of the best, I am the best in this division.”

She won convincingly despite not having her coach Al Mitchell in the corner. The venerable trainer was unable to attend because of his continuing battle with the coronavirus. He stayed home in Michigan.

Mayer remains the number one contender in various super featherweight classifications including the WBC. Despite her high ranking she has been unable to attain a world title challenge. A recent opportunity to battle for the WBC world title was outbid by Terri Harper’s promoter Eddie Hearn of Matchboxing. Harper defeated the champion Eva Wahlstrom and now holds the title. Mayer feels it should have been her opportunity.

It was announced on ESPN that Top Rank’s Bob Arum promised she would fight for the world title next.

“Bob said ‘great fight next time it will be for the title,” said Mayer of Arums words to her. “I’m going to hold him to that…don’t let Eddie Hearn out-buy us.”