Seniesa Estrada and Other Light Flyweights on TV
Written by: David A. Avila 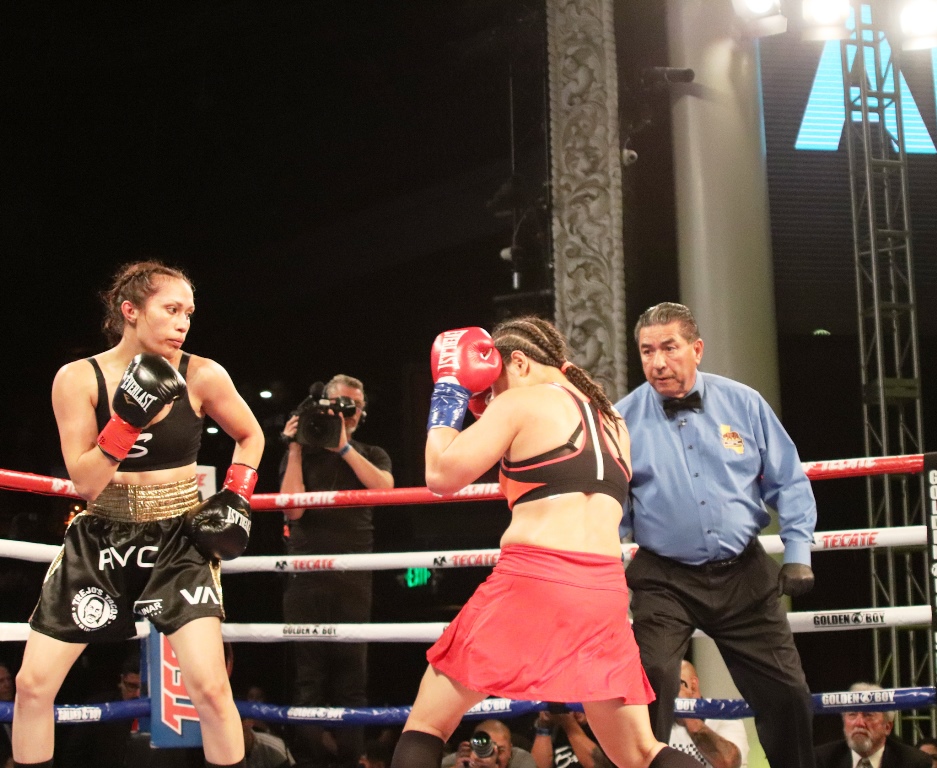 One of the hottest weight divisions shows off this week with two major televised bouts featuring light flyweights.

Clavel, 29, fights out of Montreal and has an impressive amateur background. She has fought solid competition in her three years as a professional. The only drawback: all of her fights have taken place in Canada.

Gonzalez, 29, fights out of New Rochelle and is managed by Brian Cohen of Split T Management. Many of the top female fighters are under his umbrella including world champion Mary McGee and top challengers Christina Linardatou and Melissa St. Vil.

Top Rank currently has only one female fighter on its roster and reportedly is taking a look at both fighters. What is strange is that the two light flyweights are from the East Coast. Many of the top light flyweights live in the West Coast.

It’s an opportunity for many fans to witness why light flyweights are considered one of the most entertaining weight divisions in female prizefighting. They are quick, strong and fearless.

Let me re-emphasize the quickness. They are lickety-split quick.

On Friday July 24, perhaps the strongest of all the light flyweights in the world showcases her talent when Seniesa “Super Bad” Estrada (18-0,7 KOs) steps back in the boxing ring at the Fantasy Springs Casino. Opposing Estrada will be Miranda Adkins (5-0, 5 KOs) and they will be fighting for the WBC Silver light flyweight title. DAZN will stream the bout set for 10 rounds.

Estrada, 28, fights out of East Los Angeles and has emerged as perhaps the top fighter in her weight class despite not having an actual world title. Though she fights under the Golden Boy Promotions umbrella they have been unable to secure a world title fight with any of the current fighters wielding a world title belt.

Last November, in Las Vegas, the speedy Estrada delivered a decisive win over Olympic bronze medalist Marlen Esparza to cement her claim as the most dangerous of the smaller weight fighters. It even prompted Claressa Shields who was present at the fight to proclaim Estrada the “Little G.W.O.A.T.”

Adkins, 42, fights out of Topeka and has knocked out every opponent who stepped in the boxing ring to face her. But none of those foes had a win on their ledger. It’s one primary reason that she remains a mystery. Can she fight?

Though she reportedly has an MMA background no record of her could be found of any participation of Adkins in a pro MMA fight. It might mean she fought in a lower rung that does not list its fights.

Knocking out five relatively unknown fighters is one thing, knocking out the best light flyweight in the world would be earth-shattering stuff.

Estrada was looking for more known competition but for various reasons was unable to find a more known and ranked opponent. One major reason has been the current restrictions regarding fighters from outside the USA. Most of the top tier light flyweights, mini-flyweights and flyweights are from other countries like Mexico, Venezuela, Argentina, and especially Japan.

It’s another reason that many of the top light flyweights derive from the western portion of North America.

Expect this division to deliver some explosive confrontations when the world resumes to normalcy.

Estrada, like many other light flyweights, can participate in the 105-pound mini-flyweights, 108-pound light flyweight, or 112-pound flyweight division without blinking an eye. This factor makes them flexible and creates multiple matchups that could excite boxing fans worldwide.

On Thursday July 23, one of the top trainers in the boxing world Abel Sanchez will be talking about his role in preparing unified welterweight world champion Cecilia Braekhus on the radio/podcast show called 2-Min Round. She has an upcoming battle against unified super lightweight world champion Jessica McCaskill on August 15.

Braekhus has been working in Big Bear Lake with Sanchez at his boxing compound known as “The Summit” to learn the more offensive style for her upcoming showdown with McCaskill. This is the Norwegian fighter’s second fight under Sanchez.