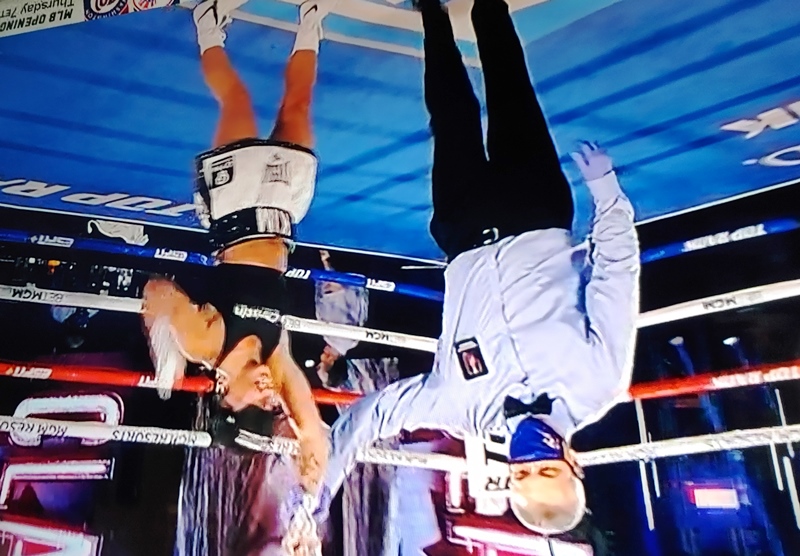 Montreal, Canada’s Kim Clavel (12-0, 2KO) made her United States debut a good one with an impressive and dominating eight round unanimous decision over the previously undefeated Natalie Gonzalez (6-1, 1KO) of New Rochelle, New York.

The fight was held at The Bubble at the MGM Grand in Las Vegas, Nevada. After the eight rounds all three judges saw it for Clavel with scores of 80-72.

The fight marked only the second under the Top Rank banner featuring female fighters during their summer series on ESPN. The first was exactly a week ago when super featherweight Mikaela Mayer dominated Helen Joseph for eight rounds.

It is rumored Clavel has signed an exclusive with Top Rank although it has not been announced as official.  If so, she would be only the second female fighter fighting under the Top Rank banner along with the aforementioned Mayer and only the third ever signed by veteran promoter Bob Arum.

Clavel got to the fight, her first in the United States, after a half a year hiatus. Her last fight, a unanimous decision over Esmeralda Sagahon for the vacant NABF light flyweight title, was last December.

Clavel’s career up to now wasn’t knocked out by Covid-19 but on the other hand, Clavel was doing her part to knock out the virus.  The 29-year-old decided to take a break from the ring to go back to her day job as a nurse to work in hot-zone facilities in her hometown of Montreal.

That unselfish decision led her to be awarded this year’s ESPY Pat Tillman award for Service.

As far as the also 29-year-old Gonzalez, mother of two, she began boxing at the age of 14 and went pro in early 2016.  Her career has been a sporadic one with three fights in her first year but no fights in 2017 and only one in 2018.  In 2019 she fought twice with her last in October, a unanimous decision over Martina Horgasz.

From the opening bell it was evident Clavel was going to use her quick and educated jab to maintain her preferred distance.  Clavel was aggressive but clinical as she combined her attack not only to the head but also to the body of Gonzalez.

Gonzalez was a bit more aggressive in the second looking to be first but was met with a hard counter right from Clavel.  The Canadian began to display her technical superiority with her jab as she smartly used it to keep Gonzalez at the end of her punches despite her opponent’s push to make it a brawl.

In the middle rounds Clavel began to use speed to punch in-between Gonzalez’s attack finding a home for her hard straight right hand. Gonzalez was able to close up the gap and make it a bit of a closer fight in the fourth and fifth round.

The New Rochelle fighter looked for an overhand right and found her opening landing the punch flush to the cheek of Clavel. Clavel didn’t flinch as she went back to scoring combinations to the body and head.  Gonzalez was not deterred scoring a left hook to the other side of her opponent’s face and willing to take three punches to score her one.

By the end of the fifth it looked as if Gonzalez was not only closing up the distance inside the ring but perhaps also on the scorecards as she was having a bit of success making it into a street fight. All that ended in the closing seconds of the round when Clavel scored a picture-perfect uppercut to the chin of Gonzalez, snapping her opponent’s head back as the bell closed out the round.

Clavel began to press the action a bit more in the last third of the fight scoring a hard left hook to open up the sixth.  Seconds later referee Russell Mora decided to stop the action for the second time, he did once before in the fifth, to have Gonzalez’s long hair taped.  When the action resumed Gonzalez didn’t change her game plan, looking to counter punch the much quicker Clavel.  At times Gonzalez would find her mark but it wasn’t hard or often enough to bother Clavel.

Comfortable enough with her lead Clavel began pot-shotting Gonzalez, feinting and scoring a lead hard right hand or looking to jump in with her left hook.

With a knockout her only chance for a win, Gonzalez came out guns a-blazing in the opening seconds of the eighth and last round but Clavel was not intimidated and decided to exchange with Gonzalez scoring the quicker punches.  Clavel punctuated the round and the night by scoring yet another hard left hook to end the fight.

The PrizeFigheters.com scored it 80-72 as well for Clavel.