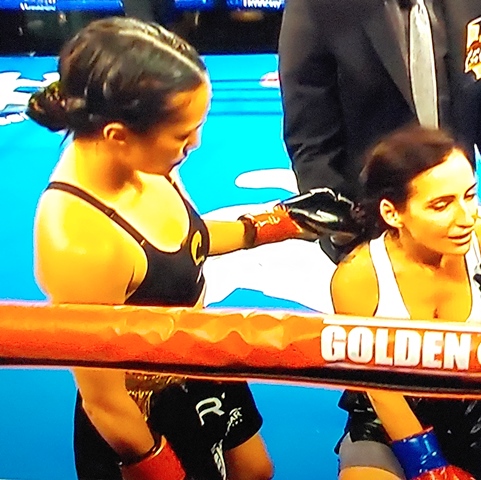 Anxious to return to the prize ring Seniesa “Super Bad” Estrada needed only seconds to prove the vast difference between undefeated records as she battered Miranda Adkins unconscious mercilessly on Friday night.

Estrada (19-0, 8 KOs) in defense of the WBC Silver light flyweight title unloaded a blinding set of combinations on Adkins (6-1, 5 KOs) to win by knockout in front of a crowd-less arena at Fantasy Springs Casino.

It took only seven seconds for East L.A.’s Estrada to render Adkins unconscious under the bottom strand of ropes.

Though Adkins, 42, walked into the ring holding the WIBA world title, it proved the difference in talent between the two fighters was as wide as the Grand Canyon.

Estrada, 28, was simply far too talented.

“Going in there I knew I had too much experience for her-amateur experience and pro experience,” said Estrada who aside from the WBC title also holds the interim WBA flyweight world title. The WBA flyweight world champion is Japan’s Naoko Fujioka. “Once I went in there and let the punches go, I couldn’t stop. It’s a fight. She’s in there to hurt me as well.”

Because of the worldwide pandemic a travel ban has forced the female boxing world to limit competition within the boundaries of the USA. But in the light flyweight division that means that competition is even scarcer.

Most of the top light flyweights in the world reside in Mexico or Japan. The travel ban forced Estrada’s company Golden Boy Promotions to keep the search within the U.S. After numerous failures to find an opponent, they finally discovered Adkins.

Though Adkins had five wins in five bouts including the WIBA title, it came against very weak competition. But Estrada was forced to fight Adkins or not fight at all. And that would mean no pay for the last nine months.

No one knows when the borders will re-open or when the danger of the coronavirus will subside. Until things return to normal fighters in the smaller weight classes like Estrada’s light flyweight division may be forced to face similar competition.

Estrada said she is willing to fight any world champion at the strawweight, light flyweight or flyweight division. All of those champions fight in Mexico or Japan.

Fujioka, who holds the WBA flyweight title and has won world titles in five weight divisions, said he is willing to come to America and defend the title against Estrada whenever she is asked.

So far Fujioka is the only world champion willing to face the tiny but mighty Estrada.

On this Friday night, Estrada showed that only experienced world champions are capable of competing with her.