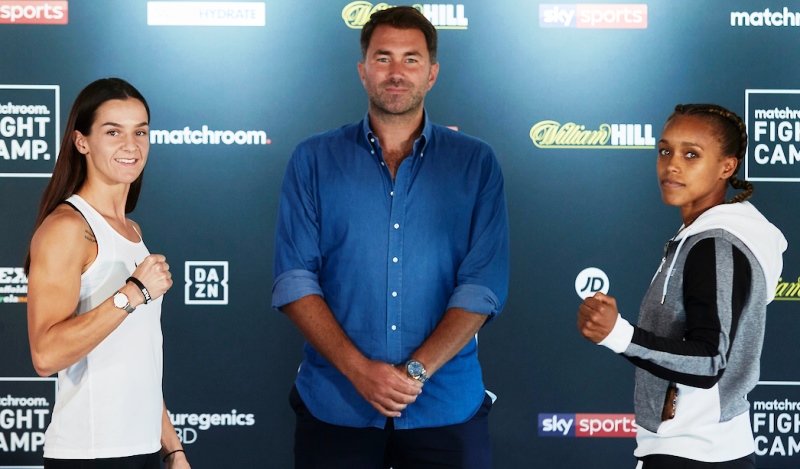 Friday night’s intriguing clash between Terri Harper and Natasha Jonas at Matchroom’s Fight Camp in England could have all the ingredients of an instant classic.

Depending on how the overhead stars align at Brentwood, Essex, the bout also has the makings of a one-sided debacle.

When super-featherweight titlist Harper defends her WBC and IBO belts against challenger Jonas, many astute observers consider it a contest in which either fighter has a decent chance of winning. In some ways they do match up as fairly equal.

Each woman has 10 professional fights. Harper is undefeated with five knockouts and Jonas is 9-1 with 7 KOs. Both are known for their solid conditioning and considered to be at the forefront of British women’s boxing.

Harper and Jonas also have similar physiques. Harper has been listed   between 5’6 and 5’8 ½, and comparisons between the pair during fight week look like Harper has a slight edge in height and reach, give or take a shoe size.

Perhaps most crucial of all, both women have those very formidable stoppage percentages which they both look to add to.

“I’m gonna go for the stoppage,” promised Harper at the final press conference. “She’s yet to really prove herself as a professional. I believe if I land a good clean shot, it’s lights out.”

“Everything we believe Terri can bring, I believe we have covered,” countered Jonas. “If I’m not giving it my all, I shouldn’t be here. If I land cleanly, I believe she’ll go.”

If they both score with heavy leather, we could get a classic indeed, but that’s just about where the similarities end in a bout billed as the first time in boxing history two British women meet for a world championship.

Harper’s recent form is that of a stalking fighter with a straight up stance who sets up openings behind a punishing jab. She has not made many adjustments in her last fights, but she hasn’t had to.

Jonas has superior movement and slicker technique. Her best chance is to stay on her toes all night long.

Jonas has an extensive, highly successful amateur background. Harper not so much, observing “For me, professional and amateur boxing are two completely different sports.”

Each seems hungry and says the pressure is on their opponent, but their reasons are polar opposites. Harper is 13 years younger and considered to still be maturing. Jonas is, admittedly, much nearer to the finale of her fistic campaign.

“There’s no pressure on me,” responded Jonas, maintaining a very calm demeanor. “I know she’s the favorite. She’s the champion, she’s got to keep hold of it. She’s been very vocal about that, now she needs to go out and prove it. There’s nothing she does better than me and I’ll go out and prove it on August 7th. I’ll be prepared and I’ll keep going whether it’s one round or ten rounds.”

“Hats off to her for everything she’s done, I’ve got nothing bad to say about her. She’s beaten people that I couldn’t. I’m realistic. She’s got the title and I’ve got to take it off her. I’ve just got to bring the best version of me, and I don’t think she can deal with that.”

“She’s young and she’s proved she can do ten rounds,” continued Jonas. “She’s fit, but I also think that some of those things can be your undoing when you’re young. Sometimes you’re a bit naive, you can be a bit overeager when you’re hungry.”

Perhaps the biggest discrepancy between Harper and Jonas is in their showings versus Viviane Obenauf, with Harper winning a wide 10 round decision and Jonas getting dropped multiple times in a four round TKO loss. Many experts say those respective results were just a matter of styles, but there’s also a strong possibility it had plenty to do with comparative strength against an identical level of talent.

It’s probably not too off base to draw a conclusion about who might have a decent chin and who might not.

“I’ve learned from it,” said Jonas. “There’s mistakes I was making that I made from day one that weren’t picked up on because I was winning. When you have that loss you have to go back and reflect on the fights before that.”

From Lockdown to Showdown

The Harper – Jonas match was originally set for April, until the pandemic arrived and wiped out the sporting schedule.

“I knew I had to carry on training, that’s what kept me sane for lockdown,” said Harper. “I put the extra time we got to good use. I won’t be daft and make a mistake looking for the stoppage. I think I’ve been getting so used to the southpaw style that it will be strange when I have to go back to orthodox.”

“I had an extra three weeks to prepare this time, and a chance to get away with my little girl,” said Jonas. “The time off really did me good. I believe I’ve turned the clock back to before the Olympics. Mentally, physically, and emotionally I’m the best athlete I’ve ever been. I’ve always known I carry power, changing the shot up with power in every one was the issue.”

Make whatever you will out of that.

Whatever develops, promoter Eddie Hearn set the scene perfectly when he said “This is probably the first credible world championship fight since coming back from lockdown.”

The best indication on what to expect could be in the odds found during an informal survey of betting sites. Sports wagering is a much more established tradition around the UK than it is in the US. There are abundant betting locations with reportedly over a thousand in the London area alone and just like in Las Vegas, the house is very often correct.

Harper is an overwhelming favorite, with Jonas ranging from around a 6 to 1 or 12 to 1 underdog, and the odds say the fight will not go the distance no matter who wins.

Harper appeared almost detached from the situation as the fight drew near. She was a bit coy but seemed to have simmering emotions and perhaps even some anger behind her demeanor. Whatever it was, she projected supreme confidence and it looked like she will definitely be going for big stoppage.

One way or another, picking an early ending looks like a pretty decent bet.