No Winner, Terri Harper and Natasha Jonas End in Split Draw
Written by: David A. Avila 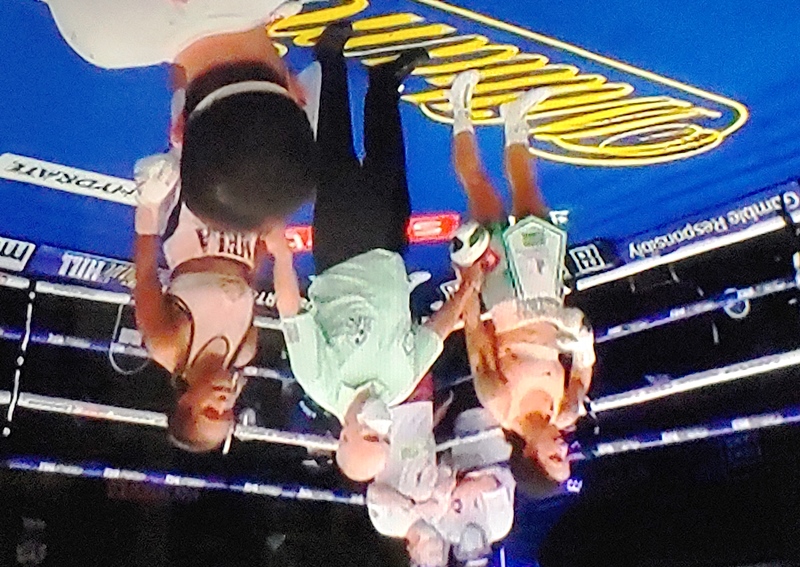 In one of boxing’s toughest divisions two British fighters Terri Harper and Natasha Jonas scrapped back and forth for 10 rounds with judges scoring it a split draw on Friday.

The WBC and IBO super featherweight titles remain with Harper.

“I knew she wasn’t just an opponent, but I did not expect her to come out like that,” said Harper, 23.

Harper (10-0-1, 5 KOs) was making her first defense of the WBC title and third defense of the IBO version, but Jonas (9-1-1, 7 KOs), though a heavy underdog, showed her Olympic skills at Fight Camp in Essex, England. It just wasn’t enough to convince all three judges.

After a tentative opening round that saw both testing each other’s reflexes and reach, Jonas scored first with a tap to the body and a one-two combination to the head. It would prove to be a difference-maker.

“I was trying to stay outside,” said Harper after the fight.

Harper had bashed her way to the WBC title early in the year with a convincing win over long-time champion Eva Wahlstrom. But against the southpaw Jonas she was quickly surprised by the faster hands inside by the challenger.

A clash of heads in the second round resulting in blood from the face of Jonas seemed to inspire Harper to a more aggressive stance. She followed that up in the third round with a snapping right to the face of Jonas and quickly went into attack mode. It was Harper’s aggression and willingness to exchange that gained her the momentum.

In the fifth round Jonas found the solution to ending Harper’s assaults. Body shots with lefts were wide open for the fighter from Liverpool and she delivered several that seemed to stop Harper’s aggression.

Both the sixth and seventh rounds saw each fighter willing to exchange in close. Harper seemed willing to take a few blows to give her own and unleashed four-punch combinations freely. But those body shots were still available to Jonas and she took advantage.

The most pivotal round came in the eighth stanza when Jonas connected with a long left cross and followed up with a right hook. Harper stumbled and nearly went down but recovered though seemingly stunned. Jonas attacked and attacked looking for an opening to close the door on Harper, but it never came. By the end of the round Harper seemed more stable and was able to connect with a three-punch combination.

“She caught me with some good punches a few times but that’s boxing,” said Harper about the pivotal eighth round. “Yeah I felt it. I felt it right through a little bit. I knew when I went back to the corner I needed to suck it up a little bit and I did for the last two rounds.”

Jonas knew she had stunned the champion too.

“I didn’t have enough time. I couldn’t get enough time to get me shots off,” said Jonas fighting for a world title for the first time.

In the final two rounds each fighter fought in close and body shots were used by Jonas repeatedly. Harper targeted the head with uppercuts and short crisp rights. It was all up to the judges to determine which fighter seemed to have the advantage. Right hooks from Jonas and three-punch combinations from Harper winged at each other until the final bell.

Both fighters remained standing and hugged at the end.

One judge scored it 96-94 for Harper, another 96-95 for Jonas and a third saw it 95-95 for a split draw. Harper retains both the IBO and WBC super featherweight world titles.

“I’m disappointed with my performance. But I’m 23 years old with only 16 amateur fights,” said Harper. “I just want to thank Tasha for an excellent fight. It was a big one for me…No excuses, but I got a lot to learn.”

Both fighters are willing to meet again. And why not? It was a fast-moving affair that had fans of women’s prizefighting eager to watch.

“Again, it was an honor to share it with her. She is going to be in the game a lot longer than I am. She made a few statements and I answered to make those statements wrong. I put on a good performance and I’m disgusted I’m not coming home with the belts,” said Harper. “Hopefully all eyes will be on women’s boxing.