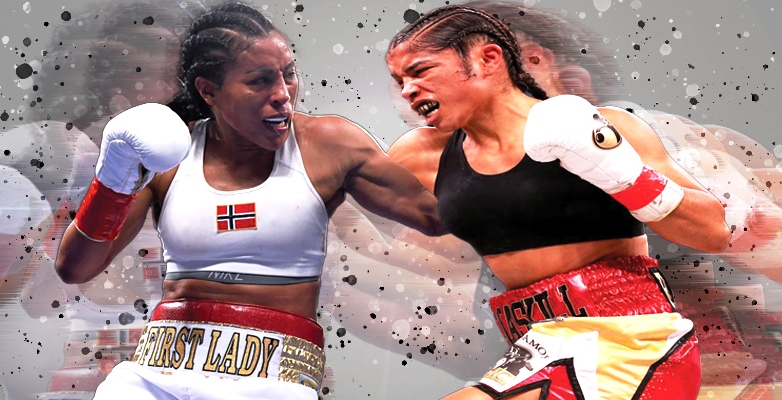 A Summer Mega Fight Braekhus and McCaskill in US on Saturday

Pandemic or not the women’s fight world puts its best foot forward and once again a mega fight takes place this week.

While stars of the men’s boxing world refuse to meet, the women are grabbing the spotlight for the second week in a row.

Last week the battle for Britain and partial ownership of the super featherweight world took place as Terri Harper defended the WBC title against Natasha Jonas. After 10 turbulent rounds the fight resulted in a split draw.

This week Braekhus attempts to snap a tie with the great heavyweight Joe Louis for most consecutive title defenses. Both defended the title 25 times. A win over McCaskill elevates the Norwegian queen to the top of the mountain.

Speaking of mountains, Braekhus spent most of this year at the Big Bear mountain top compound with elite trainer Abel Sanchez. Since the beginning of 2020, the welterweight champion worked to refine the fighting mode known as “Mexican style.”

“Abel is so professional and has worked with so many champions, I don’t have to tell him anything or explain anything, we just get down to work. He is a great guy, a motivator and that’s something that doesn’t get mentioned very often. The training in Big Bear is brutal but Abel leads by example and that’s really important,” said Braekhus, 38.

Big Bear has long been a favorite locale to prepare for mega fights. Oscar De La Hoya, Mike Tyson, Floyd Mayweather and Sugar Shane Mosley all spent many days at the mountain resort area preparing for monster fights in the past. Mosley still has his training facility literally one block up the street from Sanchez’s “The Summit” training compound.

Braekhus is the first woman to be personally trained by Sanchez, but not the first woman to train at the facility. Years ago, the great Ronda Rousey worked in the same gym for weeks at the invitation of then middleweight champion Gennady Golovkin.

The high elevation helps build stamina and keeps fighters in a seclusive state that keeps focus on their upcoming battle.

McCaskill has taken another approach.

Deep in the urban trenches of Chicago, the super lightweight champion secluded herself in a gym at the beginning of March and continued to prepare for a clash that she knew would eventually transpire. McCaskill drilled and drilled despite numerous postponements.

“The ultimate opportunity and reward in the fight is beating Cecilia, getting the belts and being in the history books. Then we’ll move on and things will be bigger and broader and we’re just continuing to look for the levels and the steps in female boxing,” said McCaskill, 35.

Always at the ready McCaskill and her trainer Rick Ramos have long believed that prizefighters should be ready to fight at a moment’s notice. It served them well when the great Katie Taylor came looking for capable foes several years back. Despite losing the battle McCaskill won the war by moving up a weight division to win the WBC super lightweight title and then the WBA super lightweight title.

Once again, McCaskill dares to move up another weight division and challenge the mighty Braekhus at a catch weight of 145 pounds for all the welterweight titles.

Daring to be great has been a mantra for McCaskill who challenged the vaunted pound for pound champion Erica Farias for the super lightweight title and won. A rematch was set and once again McCaskill defeated the Argentine great, handily.

Challenging Braekhus was among the goals the Chicago team set their target for in 2018 and now it’s here.

“This is a massive step from even the last fight, we just want to continue to conquer every challenge that comes our way. Winning on August 15 is everything, it opens up more mega fights; the Katie Taylor rematch, Amanda Serrano, Claressa Shields at 145lbs – there’s so many doors that can be opened by beating Cecilia,” says McCaskill.

The winner of this is almost assured of meeting the winner of Katie Taylor and Delfine Persoon. Both McCaskill and Braekhus are counting on it.

“When I got the chance to be one of the first to fight for Matchroom on a big show I was very happy,” said Braekhus.

This Friday another female clash takes place at Fight Camp as Shannon Courtenay (5-0) and Rachel Ball (5-1) meet in a super bantamweight fight set for eight rounds on Friday Aug. 14. DAZN will stream the fight.

It was a stark reminder that despite worldwide problems due to the coronavirus, female prizefighters are willing to pick up the slack that male boxing stars are unwilling to take.

One week after Braekhus and McCaskill collide then Katie Taylor and Delfine Persoon meet for the WBC lightweight world title at Fight Camp on Aug. 22, at Fight Camp in Essex, England. DAZN will show this too.