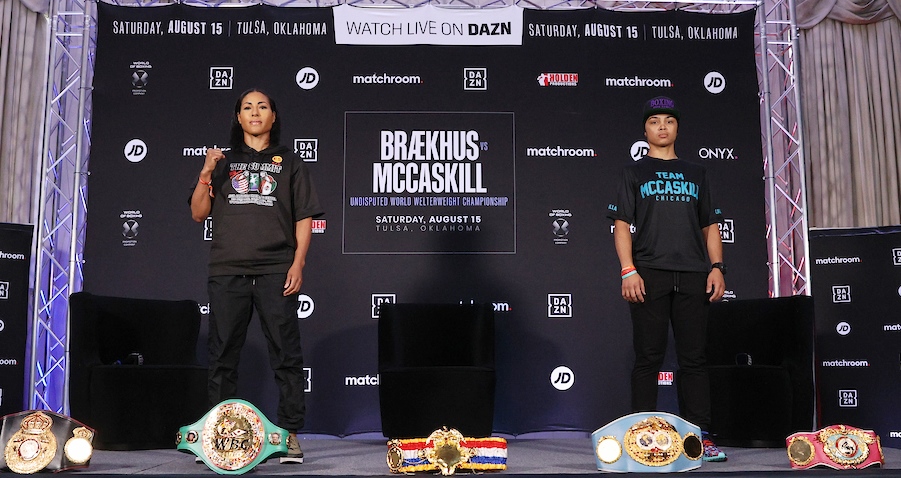 This Saturday night the undefeated, unified and undisputed welterweight world champion Cecilia “First Lady” Braekhus (36-0, 9KO) will look to defend all her titles against the unified super lightweight champion Jessica “CasKilla” McCaskill (8-2, 3KO) in the featured main event from the streets of downtown Tulsa, Oklahoma.

The fight will be shown live on DAZN and held at a catchweight of 145 pounds.

Scheduled for 10 rounds the fight is considered one of the most anticipated fights in 2020.  It pits two world champions with two very different boxing styles who are both considered in the top 10 female fighters in the world.  There is a historic angle to the fight as well as Braekhus looks to surpass Joe Louis’ record of 25 consecutive world title defenses.

What differentiates the two in the ring?  Who has the advantage before they step into the ring Saturday night?  We try to find out here.

Here are the comparisons:

POWER – Neither fighter is known to possess devastating punching power.  Braekhus, 38, steps into the ring with only a 25% knockout ratio in her 36 fights while McCaskill’s 30% is not that much better.  Braekhus’ last stoppage win was in 2017 over Mikaela Lauren back in ’17 while McCaskill’s was also in the same year.  They might be pretty even in this criteria but the fact that Braekhus is considered the bigger fighter might give her a very slight advantage. Edge: Braekhus

EXPERIENCE – There is no other trait on this list that one fighter dominates more over the other than Braekhus’ experience over McCaskill’s.  Braekhus has three times the amount of fights than her opponent and began her pro career eight years before.  If we just concentrate on Braekhus’ world title fights, she more than doubles McCaskill’s total number of fights.  In all honesty, McCaskill, 35, has only been fighting at the world-class level since 2017, granted she did face one of the best in the world in Katie Taylor but that is still not enough to equal what Braekhus has faced inside a ring. Edge: Braekhus

SPEED – Like in the first criteria, there might not be much difference between the two.  Here it will come down who reacts better to the catchweight of 145-pounds.  It would be logical to think since McCaskill is the smaller of the two, she would be the faster but she is going up five pounds while Braekhus will be expected to drop two pounds to reach the agreed limit.  Here McCaskill might have the slight advantage. Edge: McCaskill

DURABILITY – Despite only going once in 36 fights, Braekhus might be at a very slight disadvantage in this criteria.  Her visit to the canvas was fairly recent, back in in 2018 against Kali Reis which might suggest she is either beginning to feel the punches or her extensive career has begun to take some kind of toll.  McCaskill’s last four fights have been against the best in her division and has not looked hurt in any of them.  Edge: McCaskill

DEFENSE – It is no secret McCaskill’s defense is her offense, she is a come-forward type of fighter whose transmission does not include reverse.  She is the typical “Mexican-style” fighter who is willing to receive three punches to land one.  Braekhus is considered to utilize more of a European style with a very erect boxing stance with more emphasis in actual slipping and catching punches than her opponent.  Edge: Braekhus

RING IQ – They say practice makes perfect and with that comes intelligence.  One can’t imagine in her extensive championship run Braekhus has not encountered everything a fighter can inside the ring.  McCaskill, a student of the game and a proven fast learner, has demonstrated she finds a way to win but the edge might have to go towards Braekhus in this category.  Edge: Braekhus

VERSATILITY – If everything goes according to Braekhus’ trainer Abel Sanchez’s plan, we should see a new facet of his charge skill set this Saturday night.  Braekhus demonstrated her versatility in her last fight when she was able to resort back to her more upright boxing style when she didn’t seem all that comfortable following Sanchez’s game plan in their first fight together.  McCaskill hasn’t shown much of this trait in her most recent fights as she tends to just plow through her opponents bending them to her will. Edge: Braekhus

TENACITY – if there is something McCaskill brings into this fight is tenacity. Even in her loss against Taylor she proved she would not give up.  Perhaps Braekhus’ Achilles heel is that for the majority of her fights she’s dominated her opponent and has seldom bitten down to grind out a win.  We saw it against the aforementioned Reis when Braekhus touched the canvas for the only time in her career but McCaskill has displayed it in every one of her world title fights.  Edge: McCaskill

CONDITION – There might not be a clear winner in this category as both have proven to be true professionals throughout their careers and never seem to tire.  Will it help Braekhus to be at the elevated elevation of Big Bear, CA, for what has been the better part of half a year?  Will Braekhus motor be able to keep up with Sanchez’s game plan of more aggression i.e. more punches?  McCaskill opted to stay put in her hometown of Chicago, Il, for this camp betting on what is tried and true.  Edge: Braekhus/McCaskill

CORNER – Rick Ramos, McCaskill’s trainer, has grown into one of the most solid trainers in the U.S. with a growing stable of female fighters in his headquarters in the Windy City.  Although Braekhus is the first female fighter Abel Sanchez has coached, his resume is undeniable having worked the corner of nearly two dozen world champions.  Despite having faced one of the best fighters in the world in Katie Taylor, now McCaskill and team will be facing the considered by many #1 female pound for pound queen.  The fact there won’t be a crowd might even out the playing field since there won’t be that distraction, but Sanchez has the overwhelming experience.  One might say Ramos might have the advantage here since he has trained McCaskill since the beginning of her pro career, but Sanchez has seen it all inside a boxing ring and is more than capable to get what he needs from his fighter.  Edge: Braekhus

INTANGIBLES – Like many of the fights that have been contested since the return of boxing during this new normal, there are many new experiences both of these fighters had to contend with despite their experience as professionals.  Who will be able to deal with it better? Who would be better to deal with the elongated camp and the start and stops of the promotion?  Braekhus goes into the fight with the opportunity to add to her historic career by breaking Louis’ record while McCaskill will jump into the stratosphere with a win over the seemingly unbeatable Braekhus.  Does Braekhus have more to lose since McCaskill would remain a champion at 140 pounds despite a loss?  It might come down to who has more to lose.  Edge: Braekhus

On paper, Braekhus might look like the clear favorite but in boxing it comes down to executing the plan.  Both women have had plenty of time to prepare for this fight so much so that it can be counterproductive if the training was not planned effectively to peak this Saturday night.  In a recent interview with the 2-Min Round podcast Abel Sanchez revealed he wants Braekhus to win in a specific way while Rick Ramos is confident despite Braekhus’ experience, she has never faced somebody like McCaskill.

We will see it all play out this Saturday night live on DAZN.