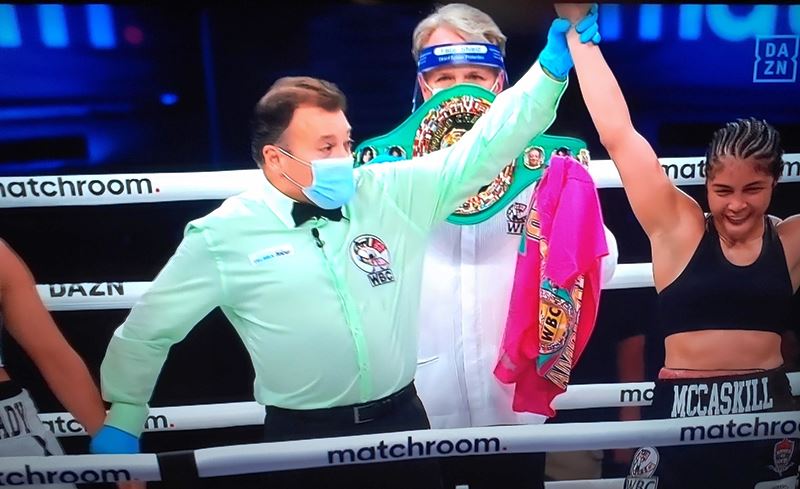 There aren’t many fighters who retire undefeated and as champions.  Perhaps you can count them on one hand.  38-year-old Cecilia “First Lady” Braekhus (36-1, 9KO) will not be one of them.

It was a shock to many in the boxing world.

“I was thinking it takes a lot to take it away from the champion,” McCaskill, 35, said after the fight.  “I just kept saying in my head, ‘and new, and new’.  That is what I kept saying when hitting the bag in the gym.  That is what happened.”

The championship fight was contested at a catchweight of 145 pounds.

The loss also cost Braekhus a chance to write her name in the record books even more so than the many times she already has.  With a win she would have tied the 72-year-old record set by Joe Louis of most consecutive world title defenses of 25.

Ever classy even in defeat, Braekhus was not sure if she would fight as a professional again.

“I’ve done so much and I miss my friends, my family,” she continued.  “Women’s boxing is just at such an amazing place right now, they will do fine without me.”

Braekhus last fight was in late November of last year, a lopsided unanimous win over Argentinean Victoria Noelia Bustos while McCaskill last fought a month earlier against another Argentinean, Erica Farias.  McCaskill easily defeated the South American via a unanimous decision for the second time.

As soon as both ladies came together in the middle of the ring to hear the instructions from referee Lawrence Cole it was evident the natural welterweight Braekhus was the bigger woman of the two.

She was never able to use it to her advantage.

It was no secret McCaskill’s game plan was to seek and destroy.  Before the first bell finished its ring, McCaskill was on top of Braekhus looking to take over the inside real estate.  Early on Braekhus looked uncomfortable with McCaskill’s mauling style as the Colombian-born Braekhus pushed her opponent off her in an attempt to make space.

In the first half of the fight Braekhus looked to fight fire with fire using her trainer’s “Mexican Style” to try to beat McCaskill at her own game.  As McCaskill bullied her way inside, Braekhus landed her right hand from the middle distance as she slipped her opponent’s wild looping hooks from either fist.

McCaskill did have success with a looping overhand right which found its home time and time again on the left side of Braekhus’ face.  As her trainer Rick Ramos implored her to from the corner to attack the body, McCaskill was more content in going for the kill with power punches.  Most of them missing more than landing.

Half-way through the fight Braekhus realized she couldn’t compete with McCaskill on the inside as the Chicago native nearly never missed up close.  Braekhus tends to stand up straight even in close exchanges giving her opponent a large target, her torso, for where to land her punches.

As McCaskill looked to slow down in the second half, Braekhus was able to keep off her and far enough away to begin to make her jab and straight right a weapon for the first time in the fight.  The momentum seemed to shift in the ex-champion’s favor as she began to tag McCaskill with hard straight and quick right hands.  Braekhus sporadically added a left hook to the combination.

In the last two rounds both fighters looked spent, a result of the constant grappling on the inside throughout the fight.  McCaskill looked to get her second wind for the tenth and final round pushing, and at times holding, Braekhus to the limit.

“This is for the fourth-grade homeless Jessica, this is for the little girl who just didn’t care what people thought about her,” an emotional McCaskill said about what the win means to her.  “This is for the me now who sacrifices everything to make a difference.”