A Changing of the Guard: Cecilia Braekhus, McCaskill and More
Written by: David A. Avila 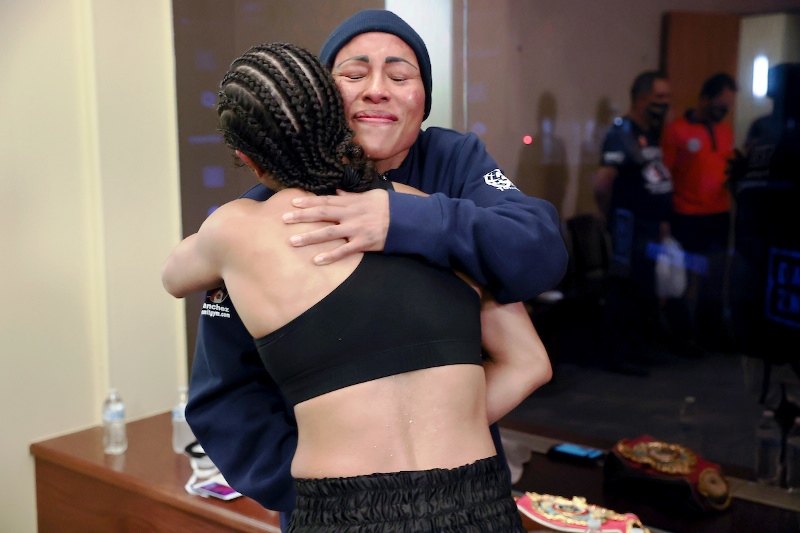 A Changing of the Guard: Cecilia Braekhus and More

As Norwegian prizefighter Cecilia Braekhus walked into the boxing ring at night, soft notes drifted from the Sam Cooke melody “A Change is Gonna Come.”

Never was a song more prophetic.

A new welterweight champion Jessica McCaskill was crowned last Saturday night in Tulsa, Oklahoma and still more is expected to come when undisputed lightweight world champion Katie Taylor meets Delfine Persoon in England on Saturday. Their rematch will be shown on DAZN.

Change in the female fighting landscape has been a long time coming and its chapters are being written and unfolded one page at a time.

Few expected the smaller challenger from Chicago to topple the long welterweight reign of the noble warrior Braekhus. Thirty-six had tried and 36 had failed. And despite only 10 pro fights McCaskill had fought several of the toughest prizefighters in the world and failed only once. That experience helped her immensely to win the IBO, IBF, WBA, WBO and WBC titles from Braekhus.

Women’s prizefighting has reached new heights and the change came swiftly despite years of neglect. But once the Olympic committees accepted women’s boxing in 2012 it was apparent that countries that ignored the sport now see its merits.

One woman, Braekhus, broke open up the doors to allow boxing in the country of Norway. One woman, Taylor, filled her country of Ireland with immense pride and now one woman, McCaskill, has shown that even the poorest of the poor can rise to become a world champion.

A change has come indeed.

When Taylor and Persoon step into the boxing ring the pair of prizefighters enter knowing each has a check of more than $300,000 dollars waiting for them regardless if they win or lose.

Who would have imagined this amount could be attainable for women’s prizefighting?

This past weekend McCaskill and Braekhus made more than $150,000 each. It’s easy to imagine the thoughts and feelings of those female fighters of the past who fought for under $1,000 for world title fights. Or those forced to fight for nothing to make sure they protected their hold on their coveted belt as what happened to Kaliesha West when she defended the WBO bantamweight world title against Ava Knight in 2011. She did not receive a single penny so that she could meet the financial demands of her foe. It’s a sorrowful tale that speaks to those darker days of women’s boxing.

The First Lady of Norway was seeking to break a tie with immortal heavyweight champion Joe “Brown Bomber” Louis. Both successfully defended their world title 25 consecutive times inside the prize ring. Louis had his string snapped by the great Ezzard Charles in September 27, 1950. He had held the heavyweight title since June 1937 when he knocked out Jimmy Braddock in Comiskey Park, Chicago.

It was a fighter from Chicago who snapped the long reign of Braekhus, who is one of the more beloved and talented fighters from Europe. She had held a version of the welterweight title since March 2009 when she defeated Vinni Skovgaard by unanimous decision in Germany.

McCaskill’s victory over Braekhus was bittersweet.

Eyes watered everywhere from people watching Braekhus congratulate the new champion McCaskill. She was gracious in defeat and her openly sincere words toward the victor choked up many watching the changing of the guard.

“Damn Cecilia you are classy! What a champion. Gracious in defeat as you are in winning,” wrote Shields on social media. “That speech just made me tear up. Good role model for women’s boxing.”

These similar acknowledgements came from all over social media by fighters, writers and fans all over the world.

Braekhus is indeed the “First Lady.”

Taylor and Persoon once again meet for the undisputed lightweight world title of the world.

Will both fighters be tested and will the results be given to the public?

The first time they met on June 2019, the WBC title was the prize and despite claims that both were tested for PEDs, no results were ever revealed by the WBC or the New York State Athletic Commission.

Persoon, who had defended the WBC title many times before fighting Taylor, has never really been tested or had the results of her tests revealed. For this fight she signed a contract with VADA to be tested throughout the training period up until the fight.