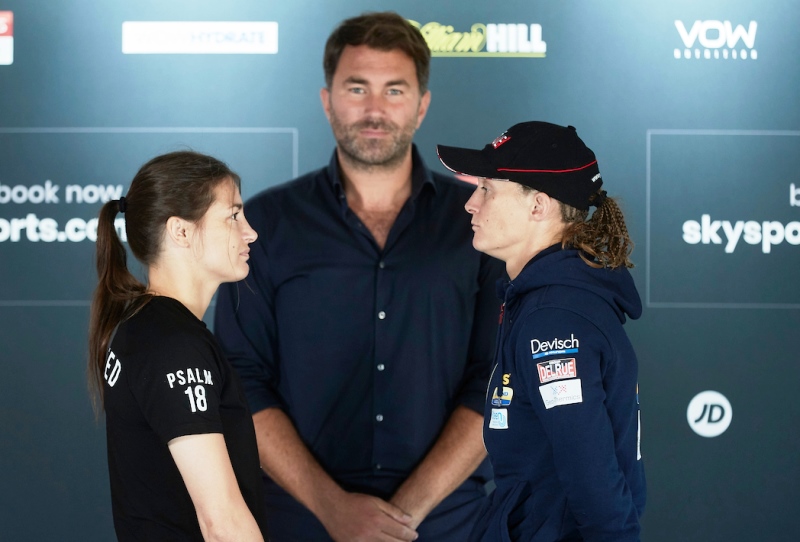 Despite being in the middle of a life-threatening pandemic, the boxing Gods have aligned and given us history making female boxing contests two weekends in a row.

This Saturday night (afternoon in the United States), August 22nd, from the Matchroom Fight Camp in Essex, England, Katie Taylor (15-0, 6KO) will look to right her wrong of last year in a much-anticipated rematch against former WBC lightweight champion Delfine Persoon (44-2, 18KO).

Even though Taylor of Bray, Ireland, was seen as the winner last June when they faced each other for the first time, it was a highly controversial decision with many fans and media alike leaning towards the 35-year-old Persoon doing enough to win that night in New York City.

Taylor wants to fix that.

The scheduled 10-round fight will be for Taylor’s WBC, WBA, IBF and WBA world titles in the lightweight division and will be televised live by DAZN.

Just like last Saturday night when we saw a changing of the guard when Jessica McCaskill pulled the slight upset over the former long-reigning undisputed welterweight queen Cecilia Braekhus, the result of this fight can have serious implications.  It can topple Taylor,34, from her place in the top three best women in the world as well as possibly ruin any plans for fights against Amanda Serrano or Jessica McCaskill in the near future.

Prior to their first fight, which Taylor was awarded with polemic scores 96-94 twice and an even 95-95, nobody believed Persoon’s talent or skill would be anywhere near Taylor’s.

What Persoon of Belgium lacked in talent or skill, she made up ten-fold in grit and heart as she went after Taylor for the ten rounds like an unleashed locomotive.  For this fight, Persoon was not Taylor’s first choice as an opponent but credit has to be given to the Irish fighter since she is willing to take such a dangerous fight when due to the current situation nobody would blame her for taking an easier fight once the Serrano bout went by the wayside.

Here is our analysis of what we might see come Saturday night from Eddie Hearn’s garden:

POWER – Here both women are pretty even with Persoon finishing 39% of her 46 fights within the distance while Taylor has stopped 40% of her opponents in 15 professional fights.  Both have only scored one TKO each in their last five fights.  Persoon will be going up in weight since dropping down five pounds in her last fight and going 10 rounds against the very tough but much smaller Helen Joseph.  If we go by the very unobjectionable criteria of the condition of their faces from their first encounter and giving Taylor the benefit of the doubt the hematomas on Persoon’s face where the result of punches and not headbutts, we must give the edge to the Celtic. Edge – Taylor

EXPERIENCE – Taylor is a veteran of hundreds of amateur bouts and has won multiple gold medals in most the major World or European class tournaments she entered culminating with a gold medal at the 2012 Olympics.  That was the amateurs and despite her 11 fights for world titles, Persoon triples her number of fights as a professional.  In their first fight Persoon was able to dictate what kind of fight they were going to wage.  Persoon’s experience and veteran tactics helped her make it into a street fight and not a boxing match which would have benefited Taylor. Edge – Persoon

SPEED – This is one of the easiest categories to award to one of the two fighters.  There is no doubt Taylor’s hand speed is much superior but her foot work as well.  In the rounds from the first fight that Taylor had the most unbridled success, she was able to land quick straight punches from the middle distance and then move out of harm’s away with her seemingly even quicker feet.  Persoon at times looks like she throws the punch on Friday for it to get there on Saturday.  Edge – Taylor

Durability – Neither fighter has touched the canvas as a professional.  Although in the first fight Persoon slightly landed more total punches, Taylor scored more power punches.  With her way of keeping her balance and not overreaching like her opponent, one might say her punches come in harder but Persoon was never deterred.  As mentioned before, Persoon finished the first fight with serious swelling over both eyes, especially the left but still she never stopped throwing punches.  With that she takes the slight edge. Edge – Persoon

DEFENSE – Persoon’s defense is her offense.  She doesn’t really catch punches with her gloves but more so with her face.  As mentioned, it doesn’t matter to her to receive punishment as long as she gets close enough to deliver hers.  Taylor is much more fluid with her defense, using head and waist movement to slip punches as well as her exceptional footwork to get just out of reach.  Edge – Taylor

RING IQ – Persoon is known as a slow starter which in the first fight proved to be detrimental.  Taylor demonstrated she knew exactly when to switch from fighting on the back foot to being more aggressive and exchanging although it wasn’t enough.  Taylor has been strapping up the gloves since the age of 11 so she knows the inside of a ring forwards and backwards and has shown it since her first pro fight. Edge – Taylor

VERSATILITY – If there is one trait the majority of the boxing world says Taylor has more than enough is athleticism.  In the first fight Taylor showed she can land punches on the inside or from the middle distance, in the middle of the ring or against the ropes.  Persoon landed more punches but it was because she was like a bull that had just seen red, following her prey and as soon as she got close enough, unleashing her attack.  There is no nuance to Persoon’s style, it’s all or nothing. Edge – Taylor

TENACITY – There is no contest in this category.  It didn’t matter how many punches Taylor landed, from what angle, how fast or how hard, Persoon did not stop looking to win.  Taylor didn’t give up either but it was evident that Persoon understood she wasn’t as good as her opponent but that wasn’t going to be enough for her to stop fighting.  Many times, we have seen a fighter realize the talent and skill across from them is much more and resort into just going through the motions looking to hear the final bell.  If anything shined through the night of June 1st of last year, it was Persoon’s relentlessness. Edge – Persoon

CONDITION – For Persoon to be able to keep pushing forward while throwing punches, her conditioning needs to be above average.  In boxing circles, it is believed a fighter gets more tired from the punches they miss more so than the ones they land.  In their first fight Persoon threw a total of 586 punches while landing 116.  She missed over 400 punches.  In the first round Persoon threw 48 punches.  In the tenth, 85.  Taylor didn’t look all that more fatigued than Persoon in the first fight, but she didn’t look fresher either. Edge -Persoon

CORNER – Both trainers have been with their charges for all of their pro careers.  Ross Enamait took on Taylor at the end of her amateur career while Persoon’s trainer/manager Filiep Tampere is all she knows in her corner.  In this category it comes down to who had the better game plan in their first fight.  Yes, Enamait was cool, calm and collected in the corner while he delivered succinct and useful instructions to Taylor in the first fight but Tampere was not only able to establish the strategy from the opening bell but was able to figuratively whip his fighter to the final bell.  The question for the rematch is if either one learned something from the first go-around but on paper the Flemish coach has the slight edge. Edge – Persoon

INTANGIBLES – Just as long as Taylor has been training her body, she has been training her mind.  Since she has been at the top of her weight class, in the amateurs and the pros, for such a long time the pressure to stay there at times might be unbearable.  For the first time in the pros, Taylor was taken into deep waters.  So much so many people saw Persoon beat her.  That must be somewhere in the back of her mind.  One can imagine with the controversy of the decision in their first fight, it has planted a seed, no matter how tiny, of doubt in Taylor’s mind.  Persoon is coming in with just the opposite.  To her she won, and many others, she won the fight.  She is coming in as confident as if she had won. How both react to those doubts and beliefs might have a big part in the final decision. Edge – Persoon

The winner of the rematch will be the one who made the necessary adjustments.  After 10 rounds they know each other fairly well so whoever can tweak what the other is expecting ever so slightly will walk out of the ring with all the hardware at 135 pounds.  Will Taylor’s natural athleticism be enough? Will she have the right game plan to stop Persoon from dictating the fight? Or did Persoon add just enough of a wrinkle to her savage come-forward style to topple Taylor?

This Saturday night we will have our answer.