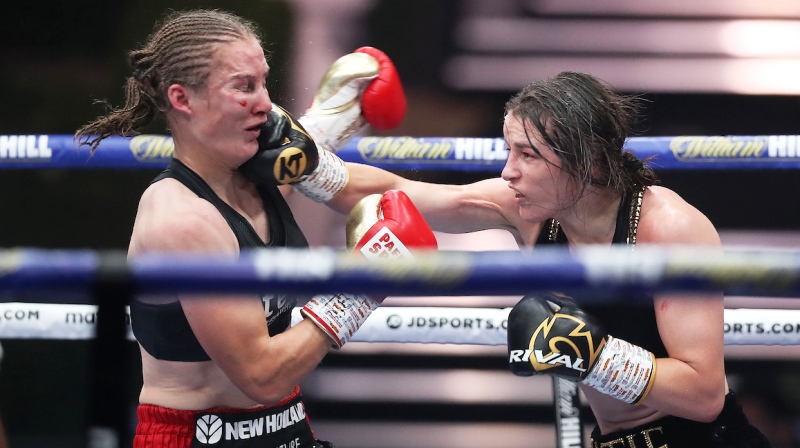 A tidal wave of women’s boxing has arrived in the summer of 2020.

Led by England-based Matchroom Boxing, a bevy of marquee fight cards featuring elite female prizefighters hit the boxing scene these past weeks. They drowned the competition of male match ups so far.

This past weekend fight fans saw Ireland’s Katie Taylor win by decision over Belgium’s Delfine Persoon in another lightweight battle that could eventually be the Fight of the Year in 2020 as it was in 2019.

Last year, the effectively wild swinging Persoon pressed Taylor until the final second and nearly beat the 2012 Olympic gold medalist. This time Taylor implemented new defensive tools in her arsenal and that proved effective in ducking under Persoon’s steamroller style.

A week ago, Chicago’s Jessica McCaskill used a pit bull style of inside fighting to muscle her way to victory over Norway’s Cecilia Braekhus. It was the first ever loss for the “First Lady” who was considered by many the top female fighter pound for pound.

McCaskill entered the boxing ring with only 10 total professional fights and a handful of amateur bouts and has proven to be a natural. It’s not easy to jump into battle against a Katie Taylor, Erica Farias and Braekhus and emerge healthy. All three of those are among the best female fighters of all time.

Both McCaskill and Taylor are supposedly meeting again to decide the winner of a four-fighter tournament initiated by Matchroom Boxing’s Eddie Hearn.

We shall see if it materializes.

Many had expected a Taylor versus Braekhus scenario but as any experienced fan of the sport can tell you, anything can happen in boxing. There are no sure things.

Few expected McCaskill to defeat Braekhus. Fewer expect McCaskill to defeat Taylor in a rematch if they meet again. But anything can happen. Both fighters have added more weaponry since their first meeting nearly three years ago. A second clash will surpass their initial 2017 fight. McCaskill only had six fights then and maybe two or three amateur fights compared to Taylor who had amassed more than 200 amateur fights. McCaskill is a natural-born fighter.

Props to Matchroom Boxing for bringing the female prize fights to the forefront. Hearn was the only promoter willing to gamble wildly on showcasing elite women fighters like Taylor, Braekhus, Persoon, and newcomers like Terri Harper and Natasha Jonas.

Mayer has been chasing a world title fight for the past three years but first had to convince her promotion company Top Rank that she was ready to tackle the elite in her talented weight division. The Las Vegas-based company does not like to rush its talent and also does not like to overpay for fights. Plus, Mayer is the only female prizefighter signed to their promotional company at the moment.

In California, Golden Boy Promotions also has several women fighters on its stable including the now more familiar Seniesa “Super Bad” Estrada. Her seven-second blitz of Miranda Adkins has been seen around the world. Even people who don’t follow boxing have seen Estrada’s seven-seconds of destruction that took place last month in Indio, California. Millions have seen the viral video evidence.

Sadly, Estrada’s grandmother recently succumbed to the coronavirus that has killed over a half million around the world. We send our regrets and prayers to the Estrada family and to everyone around the world that has lost a family member to the dreaded disease.

Undisputed welterweight world champion Claressa Shields remains the only elite fighter that has not seen action in 2020.

Recently, Showtime television network unveiled its upcoming schedule of boxing cards but nothing was mentioned on Shields. Many of her recent fights were televised by that same network and yet only male fighters who are promoted by Premier Boxing Champions, TGB Promotions, or Mayweather Promotions were mentioned. Not Shields who is promoted by Salita Promotions. Several weeks have passed but no mention of Shields future dates. The eager fighter seeks to become the undisputed super welterweight world champion. She’s already accomplished that feat as a middleweight and dropped down to the 154-pound limit super welterweight class.

Recently via social media, rumors that Savannah Marshall seeks a fight with Shields have emerged. The British fighter Marshall is unknown to American fans, but she once defeated Shields in an amateur bout by points. Of course, amateurs are far different than prizefighting. But Marshall has been riding that claim to fame for years now. Time to cash in before she loses to a nonentity.

Shields seems eager to fulfill Marshall’s dream, but at what weight?

We shall see what the future holds in this year that has seen women’s prizefighting rise and drown male competition like a tsunami.