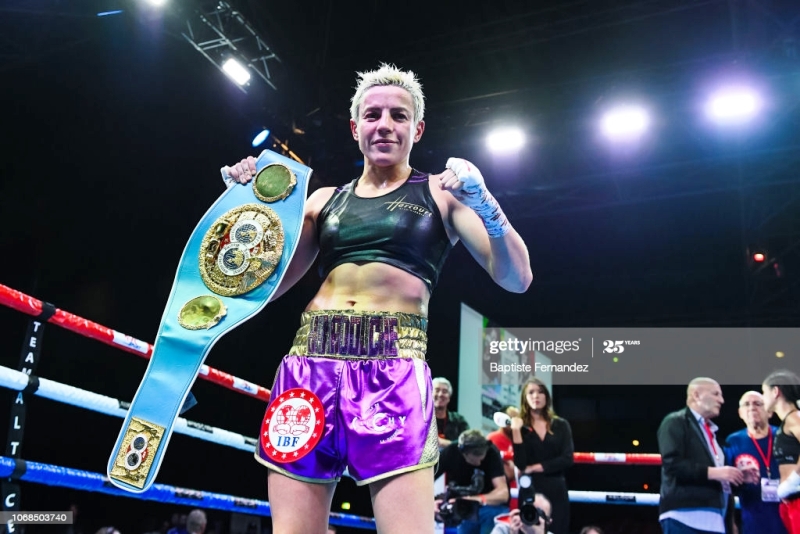 Put another bullet into the chamber that’s become the locked and loaded female super featherweight division.

OPI Since 82 is a boxing management company based out of Italy.

Now, France’s Hamadouche adds even more depth and recognition to the promotion company headed by Eddie Hearn and showcased worldwide on the streaming service DAZN and Sky Boxing.

Taking advantage of a climate that finds elite male matchups more difficult to make for economic reasons, Matchroom has opened up the female fight world by showcasing elite fighters such as Katie Taylor, Delfine Persoon, Cecilia Braekhus and Jessica McCaskill.

All four world champions engaged in two of the most memorable fights of the year so far. Each match was a huge summer success and revealed the female boxing world to many fans who did not know it existed.

Hamadouche, 30, has long been considered by many one of the top super featherweights in the world and has 21 wins and only one loss. In those wins 17 came via knockout. She adds heavy firepower to the super featherweights. It’s also the most talented and dynamic division in the female fight world.

“I’m delighted to welcome Maiva Hamadouche to our ever-expanding roster of female world champions at Matchroom Boxing,” said promoter Eddie Hearn. “It’s a stacked division with Matchroom now representing three out of four of the world champions at 130lbs. I look forward to making huge unification fights at super-featherweight to find the undisputed ruler.”

Interestingly, Hamadouche had been scheduled to meet WBA super featherweight titlist Hyun Mi Choi of South Korea. But the pandemic hit and for undisclosed reasons their fight never took place.

With her new alliance with Matchroom, the French dynamo known for her relentless fighting style is now poised to become a central figure in the looming super featherweight wars.

“By signing with Matchroom and OPI Since 82 I will be able to secure the unification fights in the super-featherweight division that I thrive for,” stated Hamadouche. “Eddie Hearn promotes a number of world champions including Terri Harper and Ewa Brodnicka, who both fight in my weight division. Those are the fights that I want. I am determined to prove that I am the number one 130lbs fighter on the planet and in order to do that I must beat Harper and Brodnicka.”

She may not get that chance against Brodnicka who is scheduled to face American fighter Mikaela Mayer this October in Las Vegas, Nevada. It remains to be seen if the Poland-based champion can hold onto the WBO title against US Olympian Mayer.

Still, whether Mayer or Brodnicka win, the division remains one of the most competitive in women’s boxing. And all are willing to fight each other despite differing promotion companies.

“I’m Brodnicka’s mandatory which means a belt is coming to USA and Top Rank,” said Mayer who fights under the Top Rank banner and is televised by ESPN. “I’m fine with Eddie (Hearn) signing Maiva (Hamadouche). Shoot. Get Hyun Mi Choi too. At least I’ll know where to find them.”

See what I mean.