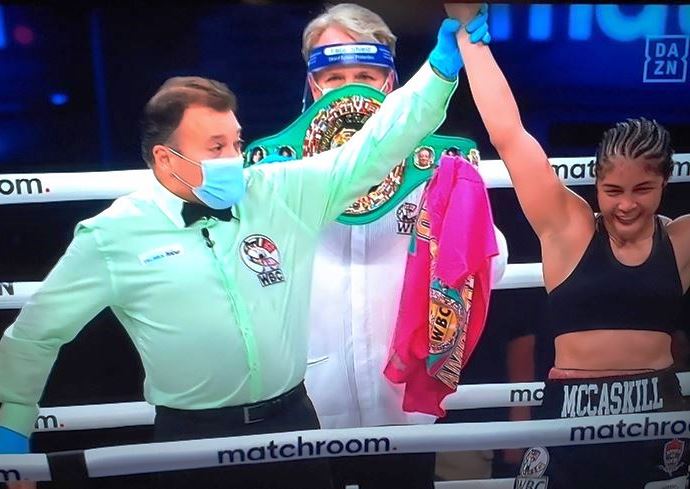 VADA announced last week that Katie Taylor and Delfine Persoon both passed their testing before and after their riveting lightweight battle on August 22, and no illegal drugs were detected in their bodies. It was a million-dollar fight and worth every penny.

However, the welterweight fight between Cecilia Braekhus and Jessica McCaskill a week earlier on August 15, was not tested by VADA. Instead another drug testing company was used for that welterweight showdown.

It brings to the surface one vital ingredient missing in women’s boxing, a need for transparency.

Transparency is an extreme necessity.

It took a month for information to be released that both Taylor and Persoon passed their drug tests. VADA, which is short for Voluntary Ant-Doping Association, is a company based in Las Vegas, Nevada that is hired by boxing promotion companies to provide testing for its fighters. They have a proven system that has caught many juiced athletes.

However, VADA cannot reveal the results without authority from those purchasing their services. If a promoter, a sanctioning organization like WBC or other party does not want the results to be revealed, VADA must adhere to their wishes.

This is where transparency is vital.

Taylor and Persoon had met before on June 1, 2019 in New York City, New York. Their 10-round battle was intense and brutal. It was supposed to be the first time a female world title fight was engaged under the Clean Boxing Program instituted by the WBC. But after the fight, drug results were never revealed.

A direct request by thePrizefighters.com to the New York State Athletic Commission resulted in a flat out no for an answer. Another request via email was ignored. A third request by phone resulted in NYSAC saying they did not intend to reveal the results for Taylor-Persoon.

NYSAC is a public organization that exists through taxpayer’s money. It was established to provide transparency in sports and gaming. Maybe they should be investigated.

On June 18, 2019. thePrizefighters.com was invited to a dinner party for journalists by WBC president Mauricio Sulaiman at the Palm Restaurant in downtown Los Angeles. It was attended by more than 30 journalists from the Southern California area. Our publication asked Mr. Sulaiman in front of all the other journalists, what the results of the PED testing showed for Taylor and Persoon. The WBC party took place 17 days after their fight. He did not answer the question, instead he circled around the subject and uttered that he was wholly supporting women’s boxing. To this day neither the WBC, Matchroom Boxing or NYSAC has revealed the results of PED testing for that fight that took place between Taylor and Persoon on June 1, at Madison Square Garden.

What are they hiding?

At least the results for the second encounter of the Taylor-Persoon clash were revealed and showed both passing. But why not the first encounter?

Here is the reason why:

Women do not naturally have large amounts of testosterone like men. Female fighters who use PEDs, whether intentionally or accidentally boost their testosterone. This gives the users a dangerous advantage. It could be fatal.

Victor Conte, who was convicted of distributing PEDs, now works as an advisor to companies like VADA. He said that increased testosterone by women could lead to dangerous and maybe fatal results.

Women cannot use PEDs. It could prove deadly one day.

Today, women’s prizefighting has reached epic heights. Several fighters are acquiring purses beyond $100,000. This has never been seen before. One day, hopefully soon, female boxers making more than $1 million will be a regular sight.

But maintaining safety is paramount to keeping women’s boxing on an upward course. Forget about the danger of arguing over two-minute rounds. That does not compare to the danger of PED use by women. PED usage is cheating, plain and simple. It cannot be condoned.

Lately, female prizefighters have been caught for PED usage by testing companies. One major reason has been that women’s boxing had never been tested before. They did not make enough money to afford testing which is costly.

Another reason female prizefighters are failing PED tests comes from their overall ignorance of what constitutes PEDs.

VADA recently put out a video that shows PEDs can be found in vitamin supplements, foods, drinks and other forms of chemicals used for medicine. They also have a list of chemicals that are banned. Fighters should read and know this list backwards and frontwards.

The need for safety and transparency has never been greater in female boxing.