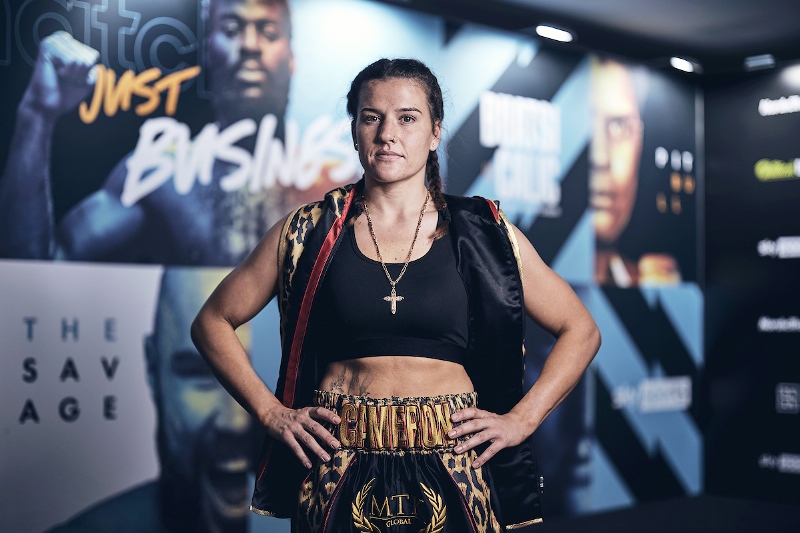 After more than 10 years in boxing Chantelle Cameron has an eagerness to prove world title worthy and faces Brazil’s Adriana Dos Santos Araujo on Sunday.

“I don’t think there’s going to be anyone that is as hungry as me,” Cameron says.

Though fighting primarily at the 135-pound lightweight division awaiting a possible showdown with former amateur foe Katie Taylor, the boxer from Northampton saw an opportunity to fight for a world title in the 140-pound super lightweight class.

She’s going for it.

“I’m 29 now and I want my own world titles. MTK and Jamie (Moore) told me to move up to super-lightweight and I got my mandatory there, now I’m in this position,” said Cameron who is managed by MTK Global and trained by Moore. “It’s a short career so I don’t want to be wasting my time, especially with everything that has happened this year.”

Blocking her path is Dos Santos Araujo who has like Cameron boasts a strong amateur career that includes a win over Natasha Jonas. But that was amateurs and now both will engage for 10 rounds for the title vacated by Jessica McCaskill who now is undisputed welterweight world champion.

Like America’s McCaskill, the British born Cameron has plans to unify the title if she wins. But first she must defeat the Brazilian.

“Adriana is a tough girl, really tough. She loads up with her punches. I don’t think she’s a bigger puncher than me. I’ll be wary of her punches, obviously I don’t want to be getting caught, but we’ve got to see if she can take my shots as well, because I know I can punch,” said Cameron. “She has beat some good names and has a good pedigree, so I’m expecting a tough 10 rounds and can see it being a bit of a war.”

And if she wins the title she expects big things.

“Everybody wants to fight Katie Taylor, and I would have been hanging around waiting for her,” said Cameron who fought Taylor in amateurs. “At the end of the day, I need to get past people like Adriana if I want the big fights.”