Savannah Marshall vs Hannah Rankin is Canceled
Written by: David A. Avila 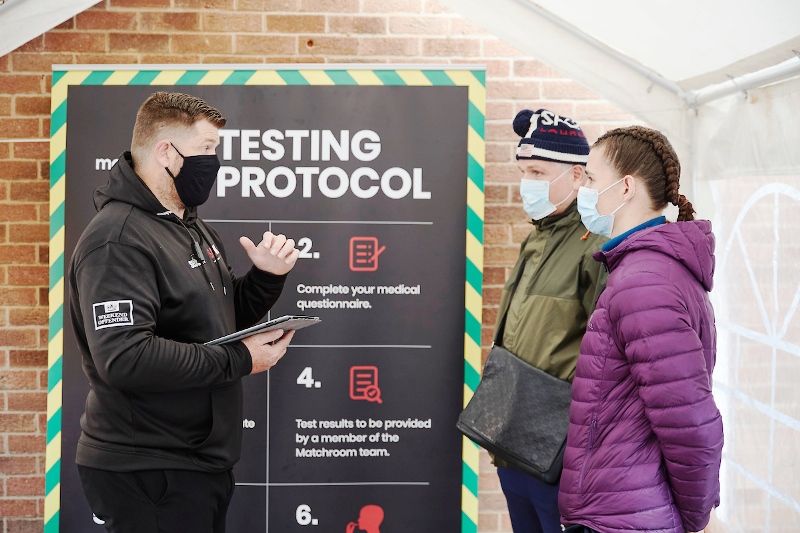 Savannah Marshall’s fight with Hannah Rankin this Saturday has been canceled.

A positive Covid-19 test from Marshall’s trainer Peter Fury resulted in the cancellation and a 14-day quarantine for their entire team.

It was a big blow for fans of female boxing.

Hard core fight fans know Savannah Marshall but those on the fringe especially in America are not familiar with the British banger from England.

Fans were about to find out just how good Marshall can perform but now they will have to wait until a future date can be established by Matchroom Boxing.

For years fans of the British middleweight cited her win over Claressa Shields eight years ago as proof of her superiority. Of course, that was in the amateur world, not the professionals.

Prizefighting is altogether a different sport.

Now the boxing world will have to wait to see if Marshall (8-0, 6 KOs) can climb to the top of the female fight world and best Scotland’s Hannah Rankin (9-4, 2 KOs) in a 10-round battle for the vacant WBO middleweight world title.

Marshall, 29, has built a reputation as an amateur but as a professional has only met two with decidedly winning records when she defeated Alejandra Ayala and Yanina Orozco two years ago.

She did make an impact with one of those fighters.

“She was the hardest hitter I ever faced,” said Ayala who campaigns as a welterweight but accepted the challenge at super middleweight in 2018.

Rankin, a former IBO super welterweight world titlist, has fought the much tougher competition and believes it’s a tremendous asset.

“She’s not had much experience fighting anyone of a high level really. She hasn’t fought anyone actually at her weight. A lot of the girls have stepped up to fight her at her weight. This is going to be the first time she’s faced someone who’s had a full camp. I’m coming to win and I’m going home with that belt. It’s going to be a brand-new experience for her,” said Rankin who fought Claressa Shields, Alicia Napoleon and Patricia Berghult.

It’s a level of competition that separates both fighters that Marshall openly admits.

Now, Marshall will need to wait before discovering if she can truly compete in the professional world that does not include protective head gear, bigger padded gloves and is limited to four rounds.

“Hannah’s a tough cookie, with plenty of heart. I’m a better boxer and, because of that, I believe Hannah is going to try and out-work me. She’s also fought at world level four or five times, while this is my first proper step up,” Marshall said to the Guardian.

Since 2016, the boxing world wondered if that win over Shields was an aberration or skill.

On Saturday, a lot of questions were supposed to be answered. It will have to wait.

The Matchroom Boxing card will be shown in the U.S. via DAZN around 11 a.m. Pacific Time.

Femke Hermans (10-3) knocked out Borislava Goranova (11-63-4) in the third round on Friday Oct. 9. The middleweight fight was held at Brabant.

Cassandra Crevecoeur (3-0) won by unanimous decision after eight rounds over Melanie Mercier (2-9-1) on Friday Oct. 9. The battle for the French light flyweight title was held at Calais.

Baby Nansen (9-4-1) defeated Karen Te Ruki Pasene (2-2) by technical knockout in the seventh round on Saturday Oct. 10. The super lightweight match was held at Manukau City.