Mikaela Mayer and Other Significant Fights Worldwide
Written by: David A. Avila 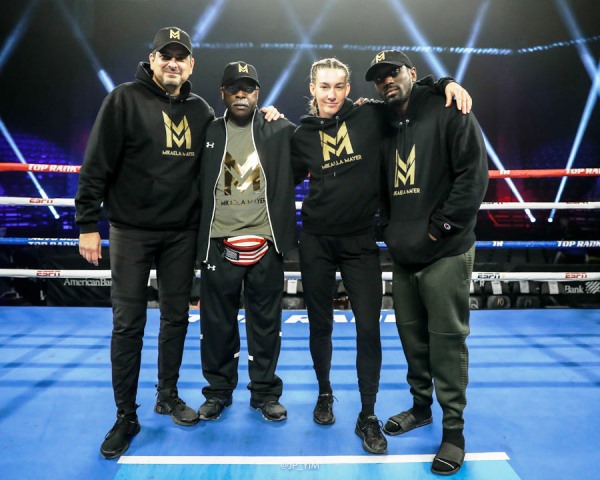 Female Title Fights From America to England and More By David A. Avila

Octoberfest ends with a bang.

Another hard-hitting weekend for women’s prizefighting features American standout Mikaela Mayer vying for her first crack at a world title and several other delicious matchups in California and England.

Mayer, 30, burned a path to the top of the female super featherweight food chain with impressive victories proving her professional talent after an impressive amateur career that ended in the 2016 Rio Olympics.

Mentored by Al Mitchell, the Southern California bred boxer Mayer signed with Top Rank after the Olympics and has been the only female boxer signed by the Las Vegas-based organization. Mayer zoomed to the top of the rankings with an aggressive style that showcases her height, speed and skills.

Brodnicka, has held the WBO version of the super featherweight title for several years. She rarely fights outside of her native Poland but signed a promotional contract with England-based Matchroom Boxing. It was supposed to be intended for the Polish fighter to unify with British fighter Teri Harper who holds the WBC belt. But Top Rank sniffed out the move and convinced the WBO to sanction a fight with Mayer first. And here we are.

For the past year or more Mayer has lobbied hard to challenge for any of the world titles and became a force on social media platforms with stinging words and charges equal to any of her boxing combinations. Her last win over the extremely dangerous and avoided Helen Joseph merely stamped the tall American beauty as one of the best super featherweights without a title.

Now she gets her shot.

About 300 miles west of Las Vegas in the desert sands of Coachella, two elite flyweights will tangle for more than just a title, but for bragging rights and perhaps substantiation of their talent.

Sadly, it’s only an eight round fight.

The last time we saw Esparza was nearly a year ago when she and Seniesa Estrada lit up a Las Vegas arena for nine three-minute rounds in a furious display of speed and skill. Though the 2012 Olympic bronze medalist lost by technical decision due to a severe cut near the eye, she and Estrada proved they could entrance and captivate an audience with their blazing fists.

It was a moment of truth in America for the smaller weight fighters.

Urbina fought all but one of her professional fights on the other side of the Mexican border. Though she lives in Arizona, fans had only seen her in Mexican arenas and via their television programming. When her contract expired with Zanfer Promotions she was ultimately signed by Golden Boy Promotions and last February gave American fans a glimpse of her talent as she battled Noemi Bosques to a convincing win at Fantasy Springs Casino.

Like two killer queen bees Urbina and Esparza do not get along.

Each fighter has speed, technique and a burning fire inside that has carried them this far in the boxing world. It should be electric.

Marshall (8-0) and Rankin (9-4) will be fighting for the vacant WBO middleweight world title. They were scheduled to fight weeks ago but the coronavirus epidemic knocked out their fight card when Marshall’s trainer was detected with the virus. Fans are eager for this fight.

Just how good is Marshall?

Though she was the only amateur fighter to ever score a win over Claressa Shields, that was in the amateur world. The professional fight arena is quite different.

Scotland’s Rankin faced Shields in the professional arena and was defeated by the American super star on American turf back in 2018. She showed grit determination.

Though Marshall signed with Mayweather Promotions at the beginning of her pro career she was never able to secure a foothold in America. Now, after signing with Matchroom Boxing, the fighter from Hartlepool, England seeks to prove her talent in the professional arena. Rankin stands in her way.

Timlin is 20 years old and Skelly 33. Neither has lost a round in their brief pro careers and will be a solid test for each other.

Great Britain seems to be a breeding ground for super bantamweights. Last week Ellie Scotney looked spectacular in her pro debut. How good are Timlin and Skelly?

Hiroko Takayama (0-0-1) and Saki Horiguchi (0-3-1) fought to a draw after four rounds on Monday Oct. 26. The super flyweight match was held in Tokyo.