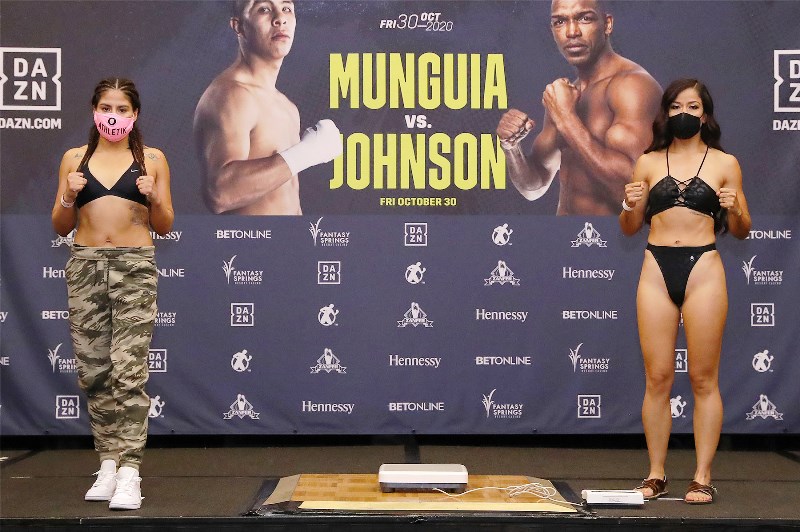 Marlen Esparza vs Sulem Urbina in Battle of Flyweights

Much in boxing is about timing.  From when to throw your jab to when to counter a left hook.  Outside of the ring it is no different.  Taking a fight at the wrong moment of a boxing career can change the course of a boxer’s future.  It can be a calculated risk that can have unmeasurable consequences.

On the other hand, it can put a fighter on the brink of greatness.

Greatness is what 2012 Olympic bronze medalist Marlen Esparza (7-1, 1KO) and undefeated Sulem Urbina (12-0, 2KO) are shooting for when they face each other this Friday, October 30th, from the Fantasy Springs Casino in Indio, CA. DAZN will stream live beginning at 5 p.m. PT.

The scheduled eight round fight will be a WBC eliminator in the flyweight division.  The winner for all intents and purposes should be the next challenger for the current world champion Ibeth “Roca” Zamora.

“I was surprised because it is pretty soon in our careers honestly,” Urbina, 30, said of her thoughts of receiving the call to face Esparza.  “I was supposed to fight towards the end of the year, but things weren’t going that well between DAZN and the pandemic, there not being that many dates available.  It is a fight that ended up coming up sooner than later but it is a great fight.  I think it is a fight people really want to see.”

Houston, Texas, native Esparza, 31, might be one of the best-known female boxers in the United States.  After a hugely successful amateur career which culminated with a bronze medal at the 2012 Olympics in London and a basket full of high-profile sponsorships, the mother of one decided to go pro in early 2017 after signing with Golden Boy Promotions.

“It was a big change; I’m not going to lie,” Esparza said last week regarding the change from the amateurs to the pros.  “I didn’t think because there wasn’t a time change, we were still doing two-minute rounds, I didn’t think there was going to be difference.  I thought I would have to learn to settle down a little bit, more power, less speed, here and there, but I didn’t really take into consideration there is a whole new tactic and a new whole idea behind the boxing.”

Esparza and Urbina of Phoenix, Arizona, by way of Hermosillo, Mexico, are no strangers to each other.  They have faced each other three times in the amateurs with Esparza taking all three wins.

“When I started boxing I would see Marlen, she was already a multi-national champion,” Urbina stated of those bouts.  “I became in a way her fan, I saw her fight, I thought she was really good.  When it got to the point when I was fighting somebody I was a fan of, I was working my way up. Now this is the pros, this is a whole different ball game.  I believe I have a better style now in the pros, I believe I am a better fighter now.”

“I don’t really think about it,” Esparza said of the results of those fights.  “If I even think that, even a little bit, then I would think it is ok to slack off or to sleep on her, like think, ‘I beat her before so it can’t be that bad’.  I need to go into it like I have never faced her before.”

“I do think I have an advantage because she is the one that keeps talking about it,” Esparza said of those wins over Urbina in the amateurs.  “I’ve never brought it up unless I was asked and the only reason anybody knows we fought and I beat her is because she is telling everybody she is talking to.  I know for sure I am in her head rent-free.”

Urbina stated despite not being able to forget the losses, they will not make a difference in the result come Friday night.

“I remember how the fights went, we fought in ’08 and again in 2014 and 2015,” Urbina reminisced.  “It is something of the process for me, that is where experience comes in.  I’ve grown in the pros and this is completely different.  It is good to remember all that and it helps me.  This is the pros, this is a different story, she hasn’t done more than I have in the pros.  I am the one that is ranked #4 in the WBC.  This is my shot.”

Last November Esparza faced archnemesis Seniesa Estrada in a ten-round fight for the vacant interim WBA flyweight title.  Estrada of East Los Angeles, CA, came up on top with a technical decision win after Esparza did not answer the bell for the tenth and final round.  The Houston native suffered a severe cut to her forehead from an accidental headbutt early in the fight.

The bout against Estrada marked the first time in more than a decade a three-minute per round championship fight was held in Las Vegas, Nevada

As far as Urbina, she has not had the opportunity to fight a three-minute round as a pro just yet.  “I do train for three minutes in the gym.  You show up and that is what is set up for and that is what a spar.  I feel great.  I feel like I can do it.  I am no scientist but I do know that we are different, men and women, as a fighter we always want to fight more and it is up to the people outside of the ring to take care of us and guide us in the right direction.  In my last fight against Noemi Bosques, I hurt her three or four times, and then the bell will ring so the fight went the distance.  I believe if we had that extra minute there would be more knockouts. I understand if you knock somebody out earlier in the fight there is less damage than getting that punishment throughout the whole fight.  I am given two minutes so I am going to do my best for those two minutes possible.”

There was no love lost between Esparza and Seniesa Estrada before, during and at least for Esparza, after that fight late last year.

“In a way, I have lost more respect for her,” Esparza answered when asked about Estrada.  “I felt before the fight we were going to find out who is who but even though she won, I feel there is still a lot of unanswered questions because of the headbutt, how everything went down, the calls and even the scores.  I would have been happy if it was split because I don’t feel I lost those rounds the way they are saying.  I don’t agree with the headbutts and how they were called.  There was so much that happened.”

It seems like it is par for the course that no matter who she faces, Esparza would have some brewing issues outside the ring with her upcoming opponent.  It is no different with Urbina.  The beef seems to stem from their time in the amateurs and Esparza’s attitude at the time which rubbed Urbina the wrong way.

According to Esparza, it is a surprise to her.

“She is saying that there is but not that I know,” Esparza explained.  “I kind of want to say it is to build it up, again everyone is playing the victim to me.  It is like I am the bad vs. the good which is ok, I will take it, I am ok with the whole bad girl thing.  I have no idea what she is talking about, we have never had a problem.”

Urbina couldn’t disagree more and according to her, she will let her fists do the talking on Friday night.

To listen to the complete, inedited interview, please visit BlogTalkRadio.com/2MinRound