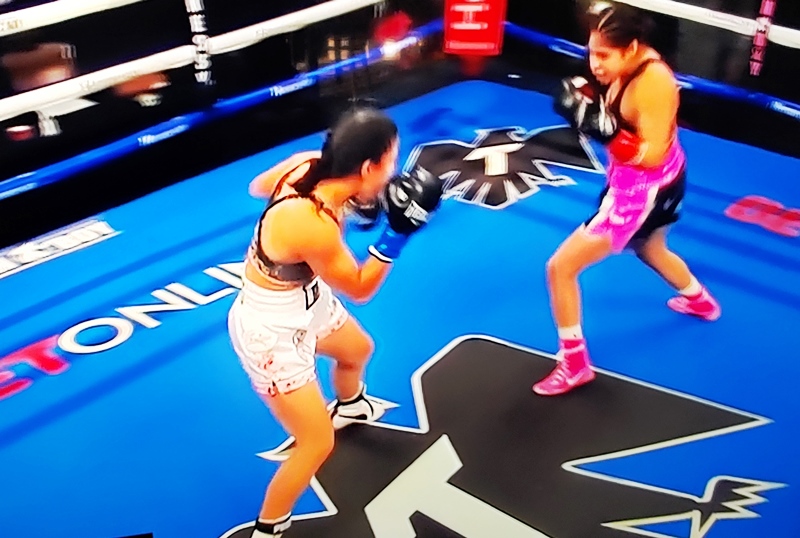 It was virtually a blur in the desert as Marlen Esparza used her angles and combinations to out-hustle Sulem Urbina in a flyweight clash on Friday.

Esparza (8-1) used her amateur skills with non-lethal slap punches to outscore Urbina (12-1) at the Fantasy Springs Casino bubble on the Golden Boy Promotions card. It was an effective method in a short two-minute eight-round bout.

“I knew coming into this fight it would be a worthy fight,” said Esparza. “I was very excited to showcase what I can do.”

Both started out quickly with big bombs as each landed clean blows making it very difficult to discern who had the advantage. Urbina seemed to land the harder blows early on as Esparza looked to find her distance.

Midway through the fight Esparza mixed her speedy slap punching combinations with strong overhand rights to the head and left hook digs to the body to score heavily. The change in attack seemed to confuse Urbina’s balance. From the fifth round on Esparza seemed to get into a groove.

Urbina failed to use her jab for several rounds, but once she did, the distance between the two fighters closed. Though Urbina began to land more solid blows Esparza was still landing hers too. A left hook from the Houston fighter knocked the mouthpiece out of Urbina’s.

The final two rounds saw Urbina increase the pressure as Esparza continued to use angles and set up a right cross to catch her foe walking in. Both connected to the body with solid shots. Urbina scored with a strong left jab at the end of the seventh round.

Urbina connected with a solid left and right combination and with a right to the body. But Esparza continued to catch Urbina walking into rights until the final bell.

After eight rounds one judge scored it 78-74 and two others 80-72 for Esparza. The Prizefighter scored it 77-75 for Esparza. It was a fight that deserved to be 10 three-minute rounds.

“I’m ready to take on a WBC world title fight next,” said Esparza.