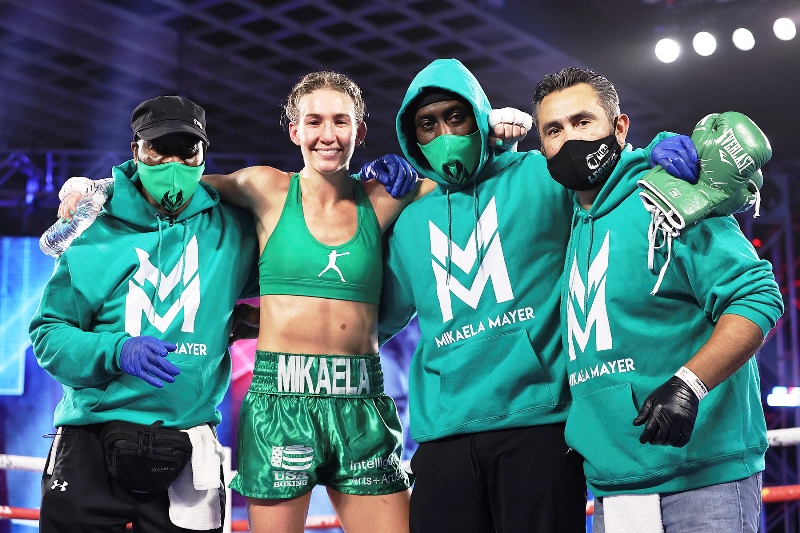 The fight was broadcast live on ESPN+.

At the weigh in a day before, Brodnicka, who had defended her title five times in Poland, originally weighed in nearly a pound over and after an hour of work, losing her clothes and most of her hair, she weighed in again a decimal over the 130 pound limit losing her title on the scale.

It didn’t make a difference.

The 30-year-old Mayer of Los Angeles, CA, controlled the fight from the opening bell with quick combinations to the body and head as she planted her flag in the center of the ring and attacked from there.  Brodnicka, 36, was the one moving around the perimeter of the ring using her lateral movement to at times frustrate the slightly taller Mayer.

While Mayer touched the body and head as soon as Brodnicka got in close, the Pole, who was in her first fight outside her country, only had one punch she wanted to land, the straight right hand which she began to do after a couple of rounds.  Brodnicka also began to hold more and more a couple of rounds in forcing the third man in the ring, referee Celestino Ruiz, to begin to issue warnings during the action and in the rest between rounds.

“Her movement and holding was a little bit tricky to figure out,” said Mayer of Brodnicka’s style.  “I still think I won all the rounds.  I felt good.”

Midway through the fight Brodnicka began to move a bit more and dart in to score a jab followed by a right hand.  When Mayer was able to catch up to her, Brodnicka continued to hold.  After numerous warnings, referee Celestino Ruiz had enough and deducted a point in the sixth and seventh rounds.

With one of her main weapons taken away, Brodnicka began to struggle as Mayer closed off the ring and attacked the body from the inside.  Brodnicka still had her moments with the right hand and was not afraid of exchanging with Mayer when in close.  Mayer scored the better punches during the exchanges getting there quicker and harder.

Despite a futile effort, Brodnicka still put up a fight in the tenth and final round staying right there with Mayer and putting up a fight until the final bell.

“I gave her a ‘B’,” Coach Al Mitchell, Mayer’s trainer, said of her performance after the fight.  “I think she could have done better. Could have stopped her. We knew exactly what she was going to do.”