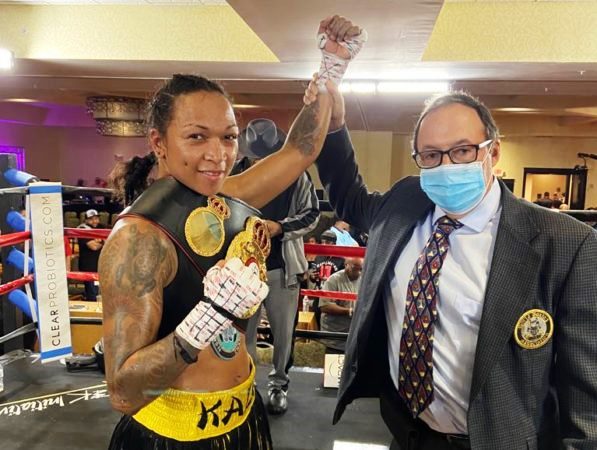 Two veterans Layla McCarter and Kali Reis fought and won this past weekend. They originally were set to fight each other but business got in the way.

Still, McCarter flew down to Mexico and fought 10 hard rounds to win against Beatriz Aguilar in a super lightweight match. While Reis fought and defeated Canada’s Kandi Wyatt by decision to win the vacant WBA super lightweight title.

Neither fight was easy.

After her world title win Reis held a video call and announced what she planned for the future.

“I want (Layla) McCarter first,” said Reis on the video call on social media on Sunday.

Though Reis would also like a crack at current world champions such as Katie Taylor or Jessica McCaskill, it’s a future fight with McCarter that is first on her wish list.

“I got a bone to pick with McCarter,” said Reis. “I’ll fight you for free.”

McCarter fought on Saturday and defeated Aguilar in a hard-fought 10 round fight in Mexico. Women’s boxing has reached a point where anyone who steps in the ring in North or South America is a threat to win on any given night.

McCarter has long been considered one of the top fighters in the world who suffered losses early in her career until reaching a point where she was just too good for the competition. For more than a decade she has remained undefeated.

Now, finally, the talent level has caught up.

McCarter last fought almost two years ago when she defeated Yamila Reynoso in a 10 round super lightweight fight in Las Vegas.

“She was tough and was coming to win,” said McCarter. “I could have used my jab more but I’m glad I was able to fight. I didn’t want to wait any longer.”

Now after getting 10 rounds of work, McCarter is eager to return soon.

Reis clashed with Wyatt this past Friday in Florida and emerged the winner and new WBA super lightweight world titlist.

“We finally got in some work,” said Reis during a video chat on social media with her manager Brian Cohen. “Mentally I did everything I could to get the job done.”

Reis and Wyatt clashed in Florida at 1 a.m. the next morning due to technical difficulties by the company streaming the fight. The two super lightweights clashed for 10 rounds with a new WBA super lightweight champion emerging.

With Reis now holding the WBA title she is part of a team that has three of the four titles at 140-pound division. Mary McGee holds the IBF and Christina Linardatou has the WBO title. The only title not tied to Split-T Management is Great Britain’s Chantelle Cameron who has the WBC version.

Two other female matches are also featured including WBC super featherweight titlist Terri Harper facing Katharina Thanderz in a title defense between the two top European fighters in the division. It should be electric.

Elvina White (4-0) knocked out Nana Chakvashvili (7-15) in the third round on Saturday Oct. 31. The super lightweight fight took place at Riga. White fights out of California but is a native of Austria.

Carly Holman (2-0) knocked out Rebeka Laws (0-1) in the first round on Saturday Nov. 7. The super lightweight match was held at Rock Hill, South Carolina. Also, Chatiqua Hemingway (1-0) won her debut by decision over Miranda Barber (0-10 in a super middleweight fight.