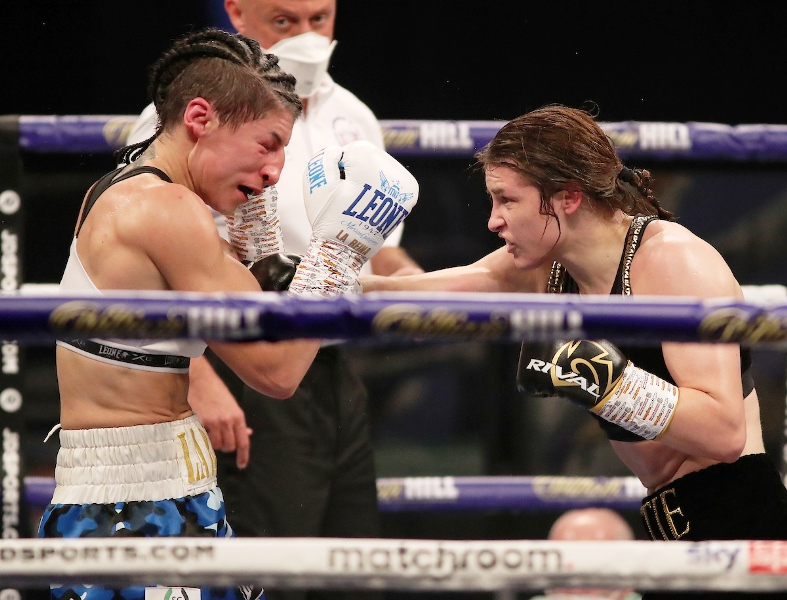 Katie Taylor Dominates in London and Other Results

Ireland’s Katie Taylor erupted from the opening bell with a blistering barrage of blows and never slowed down in overwhelming the strong and determined Miriam Gutierrez to retain the undisputed lightweight world championship on Saturday.

It was a perfect performance.

Taylor (17-0, 6 KOs) seemed inches from an opening round knockout over Spain’s Gutierrez (13-1, 5 KOs) at Wembley Arena, in London. But discovered a chin of granite whenever she unloaded with piercing blows to the head.

“I seen how I hurt her in the first three seconds and I just had to take my time,” said Taylor of her pinning Gutierrez in a corner and blasting away with abandon.

But the Spaniard would not quit.

It took all 10 one-side rounds to determine that the Irish speedster retains her hold on the undisputed lightweight world championship.

Round after round Taylor fired blinding combinations. Some that pierced through Gutierrez’s guard and others that caught the Spaniard unaware after she fired a blow. It seemed unbelievable that the fight would go on for more than three rounds.

At the end of the fourth with seconds left, Taylor countered with a right cross and left that floored Gutierrez. The Spaniard got up a little woozy but recovered during the one-minute break.

Taylor ramped up her already blistering attack with a savage 21-punch barrage in the fifth round. But Gutierrez bobbed and weaved out of serious damage and survived the blinding onslaught.

It became the theme of the fight as Taylor whipped combination after combination with precise accuracy. Gutierrez fired back and occasionally landed.

“I definitely caught her with some great shots but she as very durable,” Taylor said about their exchanges. “She actually was very heavy-handed she could punch a little bit.”

More remarkable was the Irish fighter’s ability to stand and fight, rather than jab and move. Taylor remained within firing distance but could rarely be hit by Gutierrez. It was the art of boxing at its best.

After the decision both shook hands. Gutierrez bowed to Taylor.

After the match Taylor said her future has no specific direction other than promoting the sport.

“I’d fight every month if I could. If Eddie (Hearn) would let me,” Taylor said. “There’s no shortage of big fights out there. I just want to make history in the sport and inspire the next generation. Women’s boxing is on fire right now.”

An anticipated high voltage fight started disappointedly as Harper got on her bike and jabbed and moved for the first eight rounds. But after a clash of heads and a liver shot, in the ninth round, referee Victor Loughlin suddenly stopped the fight at 1:11 of the round. Thanderz never went down but the referee prematurely ended it.

Still, it was a needed win for Harper after her last fight was ruled a draw against Natasha Jonas.

“Obviously you get doubts. I just stuck to me jabbing and moving. I just felt more mature,” said Harper. “I caught her clean with a left hook to the body.”

Rachel Ball (7-1) used her height and faster hands to win a unanimous decision over Argentina’s Jorgelina Guanini (9-2-2) in a fight much closer than the judge’s crazy scores.

Ball unloaded flurries of inaccurate combinations and was hit with precise counters by the much shorter Guanini that saw the Argentine win the first half. But the taller Ball kept the pressure on and was able to slip in more shots and win the second half of the 10 round WBC super bantamweight fight convincingly.

“I’m happy. I just really wanted to fight. Just needed to fight,” said Ball. “I did walk her down. I dealt with that quite well.”

Ball said she still wants to fight for the actual WBA bantamweight world title against original foe Ebanie Bridges who was sidelined with an arm injury.

“I want to get the WBA with Ebanie Bridges,” said Ball “If you are at this level, I want the fight.”