Katie Taylor vs Miriam Gutierrez and Two Other Title Fights
Written by: David A. Avila 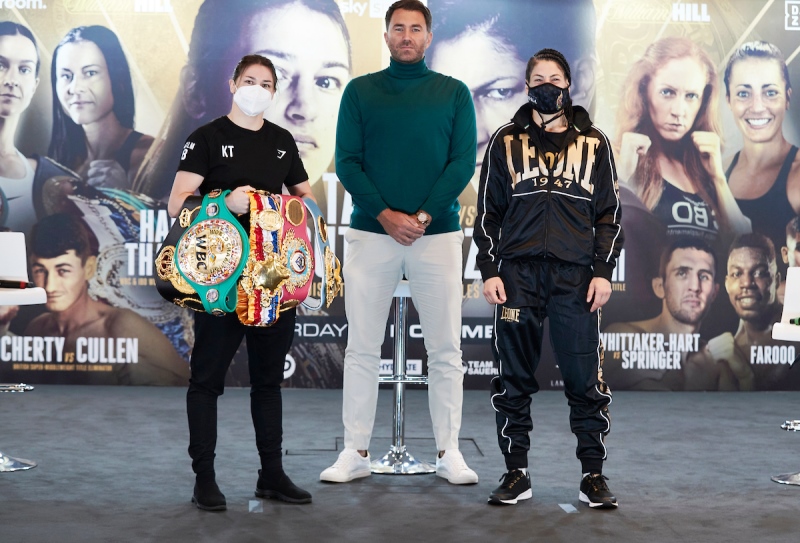 Ireland’s Taylor (16-0) faces off against Spain’s undefeated Miriam Gutierrez (13-0) at Wembley Arena in London, England on Saturday Nov. 14. The card will be streamed on DAZN and available to watch on Sky Sports via Facebook or its Youtube channels free.

“This is more ground-breaking news that helps us push women’s boxing to where it needs to be,” said Eddie Hearn of Matchroom Boxing. “Katie Taylor is a trailblazer and it is only right that she headlines this card on Saturday on a moment that we have all been working towards for a very long time. The key is to give these great fighters the platform to become stars and achieve their dreams.”

The last time fans saw Taylor she engaged in one of the top fights of the year when battling Delfine Persoon in a rematch this past summer. Their second clash was held in a bubble as will this one. Now she fights Gutierrez an undefeated fighter. It’s Taylor’s third fight in 12 months.

“I want to make history and create legacy and, to do that, you have to be active and take risks. We’re in this sport to inspire the next generation. It’s incredible to me that female fighters are household names now,” said Taylor.

Gutierrez, 37, has led the women’s boxing movement in Spain for a while and finally gets her shot at the world title.

“Of course, I am really focused, that’s not to say I don’t admire her, I have followed her career both in the amateur ranks and now in the professionals. We’ve been working really hard for this, so I am totally focused,” said Gutierrez, who fights out of Madrid. “It’s a lovely situation to be in and it’s a big opportunity for me. I have been working really hard for it so hopefully I can take advantage of this.”

Meanwhile Taylor, 34, has taken over the reins of being the highest-paid female fighter in the history of the female boxing world. She reportedly makes more than $1 million a fight and has shown a determination to push the female fight world forward.

“It’s a privilege to be headlining such a big show, an historic show. I never thought when I turned pro that we would see three women’s world title fights on a show,” Taylor said.

Another captivating world title fight pits WBC super featherweight titlist Terri Harper (10-0-1) defending against Norway’s Katherine Thanderz (13-0) who fights out of Spain. It should be one of the top fights of the year.

Harper was in a nip and tuck battle against fellow Brit Natasha Jonas that resulted in a draw. It was not supposed to be that difficult according to many experts.

“I learnt a lot after my last fight in many ways and I do want that rematch with Tasha down the line and also unifications, but I have a proven and deserving mandatory challenger to contend with first before we even look at those options – this is a proper fight and one I’m not overlooking,” said Harper about her pending battle with Thanderz.

“Thanderz was called as mandatory so that’s it. I’ve had my eye on her a good few months, maybe a year as a potential opponent so it’s not like she’s just popped out of nowhere,” Harper added.

Thanderz is the mandatory number one according to the WBC.

“My last fight was a hard one where I had to bite down on the gum shield, but this fight will be an even greater test,” said Thanderz, whose last match was a split decision win over Danila Ramos a year ago. “I came through in my last fight and had my hand raised, I’m confident that will happen again against Terri.”

Ball captured a spot on this card with a back and forth battle with Shannon Courtenay that resulted in a win.

“I know how hard it is to get those decisions away from home, so I was relieved when my hand went up. Shannon needs the rematch more than me. I’m not really that bothered, and that’s no disrespect to her. I just want to fight as many people as I can,” said Ball whose only loss was ironically to Katherina Thanderz 20 months ago at 135 pounds.

Now she fights at 118 and has height advantage against almost everyone.

“I’m very proud of myself, but I want to show more. Some people are still questioning my ability. I want to show them what I’m really about,” Ball said.

Guanini was eager to fight for the world title.

“This is an incredible opportunity for me and it’s an opportunity that I’m really looking forward to. I’m really grateful for this,” said Guanini who fights out of Necochea, Buenos Aires, Argentina and is a mere 5’2 in height. “It’s true that I am pretty small. I have been smaller than all of my opponents I have faced. I have probably never faced someone as tall as Rachel, but I am up for fighting whatever opponent that is put in front of me.”

It’s a tall order for the Argentine fighter but a big card for women’s boxing. Streaming begins at 11 a.m. Pacific Time.