Katie Taylor and the Art of Prizefighting
Written by: David A. Avila 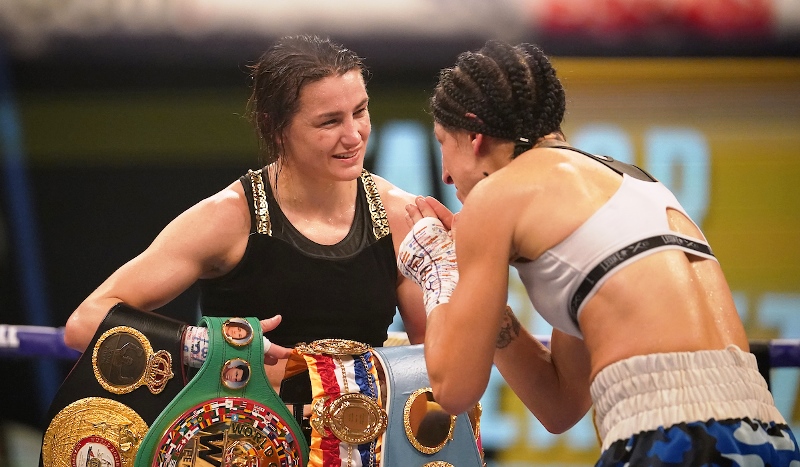 Katie Taylor and the Art of Prizefighting and Other News

Except when you combine both speed and timing in a single package. That’s when you get a fighter like Ireland’s Katie Taylor.

With a single laser-like shot Taylor dropped Miriam Gutierrez in the fourth round with a right cross that reminded me of Floyd Mayweather. It was short, concise and perfectly timed to catch the strong Spanish fighter walking into the blow.

Gutierrez never saw it coming and dropped to the floor.

Taylor and a few others like Claressa Shields have adapted the pro style of boxing that showcases not wasting energy running around the ring and throwing unnecessary combinations. They are looking for knockouts.

When Taylor and Shields first arrived, both displayed completely different styles of boxing developed after years in the amateur world. Flashy combinations with ineffective punching, hit and run style of fighting is preferred in the amateur boxing world where winning on points is the goal.

Prizefighting, or professional boxing fans prefer the hurting game. It’s all about entertaining the fans and they don’t like watching someone run around the ring and show they can’t be hit. Fans want to see blows exchanged.

Sure, you can win on points and remain undefeated. But fans prefer the fighter who can stand their ground, deal out effective blows and knock out opponents. Or at least go for the knockout.

Its why “Mexican style” boxing has remained the most popular form of prizefighting.

Taylor has begun to master the pro style and used her blazing hand speed and cat-like reflexes to remain in the firing zone and deal out punishment while seldom getting hit with return fire. It was a near-perfect performance against a very strong foe in Gutierrez.

Shields showed the same skills when she last fought against Ivan Habazin and looked very comfortable fighting in the pocket.

Women’s boxing has arrived with a new wave of fighters that really know how to fight and Taylor is one of those leading the pack.

All that remains is to change from two-minute rounds to three-minute rounds like the men. It’s something that both Taylor and Shields agree is necessary to expand the growth of women’s boxing.

WBC super featherweight titlist Terri Harper ran around the ring but lowered the boom on Katharina Thanderz with a perfectly placed shot to the liver that immobilized the Norwegian for two rounds. The referee stepped in a little early to end the fight, but maybe he saw something not visible to the television viewers.

Harper has skills but looked amateurish running around the ring. But it was later revealed she had suffered a broken right hand in the fourth round. That made her victory very impressive especially against a strong fighter such as Thanderz.

Now the lean British fighter is set to face one of the other super featherweight titlists tied to Matchroom Boxing.

Korea’s Hyun Mi Choi the current WBA titlist recently signed with Matchroom and will probably get first crack at Harper.

Instead of Harper and Mikaela Mayer we will probably see France’s Maiva Hamadouche the IBF titlist facing the American fighter who has the WBO title.

Jazmin Gala Villarino (3-1-1) and Romina Sosa (1-0-2) fought to a draw after four rounds on Friday Nov. 13. The flyweight fight was held in Buenos Aires.

Yuliya Kutsenko (8-1-1) won by unanimous decision after six rounds versus Puneh Akhundtabarmazandarani (5-2) on Tuesday Nov. 10. The super featherweight match was held at Minsk.

Visila Lagilagi (2-2-3) and Katerina Faleao (3-3-2) fought to a draw after four rounds on Saturday Nov. 14. The super welterweight match took place at Nadi.

Phannarai Netisri (7-0) knocked out Kim Jaeckel (3-3) in the fifth round of a scheduled 10 round fight on Saturday Nov. 14. The super bantamweight clash took place at Hamburg. Netisri has four knockout wins.

Ariane Nicholson (1-0) beat Uesa Opetaia (0-1) by knockout in fourth round on Saturday Nov 14. Both were making their pro debuts in a middleweight match that took place in Tauranga.

Mea Motu (2-0) knocked out Sally Kaokao (0-1) in the second round of their fight on Friday. The bout was held at middleweight but Motu only weighed 135 pounds while Kaokao weighed 150 pounds. It took place at Auckland.

Logan Holler (9-0-1) was the winner by unanimous decision after six rounds versus Sonya Dreiling (4-1) on Saturday Nov. 14. The middleweight match took place at Orlando, Florida.