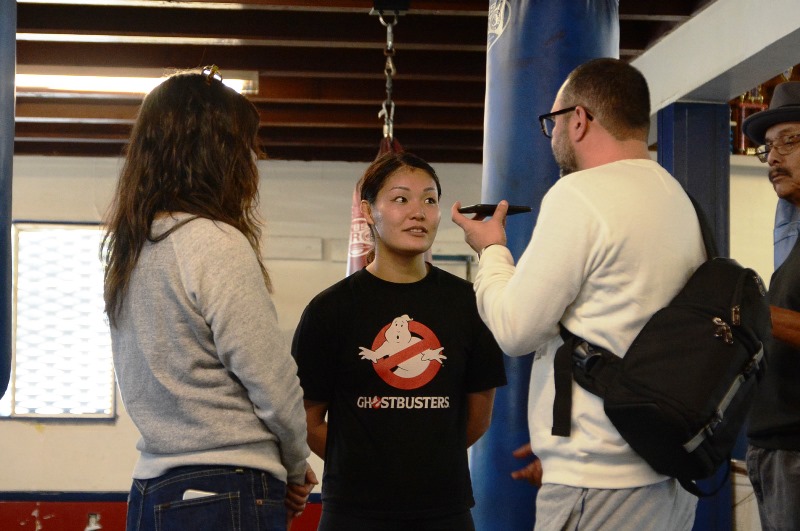 Two of the greatest fighting countries in the world headline this week’s best action.

Sadly, the rest of the world seldom gets the opportunity to watch Japan and Mexico’s abundance of talent in action.

Japan’s Yoshida (14-1) makes her second defense of the WBO super flyweight title and will be challenged by Tomoko Okuda (6-2-2) on Sunday Dec. 13, in Osaka, Japan.

Unless you diligently follow women’s prizefighting, you might not be aware that the island nation of Japan probably stages more female fights than any other country in the world per capita. Almost weekly female fights take place at the famous Korakuen Hall in Tokyo.

Yoshida is one of Japan’s stronger fighters who knows how to fight inside or outside while using her strength to her advantage.

When she visited the USA earlier in the year, she sparred with one of America’s best super flyweights Adelaida Ruiz and their action was extremely interesting. It was mesmerizing to watch them probe and dissect each other’s attacks. Hopefully, soon, the two will meet in the prize ring.

But on Sunday, the WBO champion Yoshida faces Okuda who like many other Japanese fighters are undeterred in fighting the best. Normally a bantamweight, the 37-year-old fighter from Sakai is dropping down a weight division to meet Yoshida for the world title. She is the current Japanese bantamweight champion. This will be her first attempt at a world title.

In Yoshida’s last fight she defeated China’s Li Ping Shi by unanimous decision. It was a fight that she felt could have ended by knockout, but did not.

“Shi was a good fighter more than I expected. She has quick in-out steps and solid punches,” said Yoshida. “I had experienced more than she did, but I learnt a lot from the fight. Even when I hurt her, she moved out of my follow up combinations. So, I could not knock her down or finish her. As a champion, I should have KO’d if I dominated her.”

Yoshida said that her first defense taught her much.

“After the fight, I’ve been working on how to follow up and finish an opponent,” Yoshida said.

The mighty Yoshida is 32 years old and eager to prove her talent in the USA.

In Mexico, on Saturday Dec. 12, WBC super flyweight titlist Guadalupe Martinez (20-9) defends against Lourdes “Lulu” Juarez (30-2) in Mexico City. This is Martinez’s fifth defense of the world title since defeating Zulina Munoz in May 2017.

Martinez, 28, was riddled with an abundance of losses but slowly learned how to win a fight. Now, she has not lost a bout in four years.

Though nine of the top 15 fighters in the super flyweight division are Mexican fighters, Juarez is moving up from 112-pound flyweights to 115-pounds to challenge Martinez.

It’s one of the strange moves the WBC is known for doing.

Though Juarez has defeated numerous top Mexican fighters including Diana Fernandez, Leiryn Flores, and Jacky Calvo, the younger sister of Mariana Juarez was never given an opportunity to fight for the flyweight world title. Now she moves up a weight division and faces a very strong super flyweight world champion in Martinez.

But styles make fights and Juarez has always been a very good boxer who seems to improve with every fight. She has not lost a match since 2014.

Mexico and Japan have long been a bastion for female prizefighting. This weekend they stage two of the better world title fights of the year.

Argentina showcased the talented Bermudez sisters this past weekend. Two of the three were victorious.

IBF super bantamweight titlist Daniela Bermudez (29-3-3, 10 KOs) romped to victory by knockout over Cintia Castillo on Friday. Meanwhile, her sister Evelyn Bermudez who holds the IBF light flyweight title, defeated Aixa Adema in a non-title six round fight. A third sister Roxana Bermudez was beaten down by Gabriela Alaniz in five rounds. It was her second loss in three fights.

The two victorious Bermudez sisters seem to be heavily talented. Daniela Bermudez is considered by many to be one of the top female fighters pound for pound in the world. She has not lost a fight in nine years despite fighting top competition.

“I’m a unified world champion at the top of my game and he will help me build my brand and handle the business aspects of my career,” stated Crews-Dezurn on Monday Dec. 7. ““For me, it’s all about bigger and better and making more noise.”

Crews is promoted by Golden Boy Promotions and is scheduled to fight on January 2, in Dallas, Texas. The Maryland-based fighter is known for making her pro debut against Claressa Shields who was also making her pro debut. Their clash was one for the ages.

Nazarena Romero (11-0) won by technical knockout in the second round over Julieta Cardoza (12-6) on Saturday Dec. 5. The interim WBA super bantamweight bout took place at Cordoba.

Daniela Bermudez (29-3-3) won by 10th round stoppage versus Cintia Castillo (10-8) on Friday Dec. 4. The IBF super bantamweight title fight was held in Santa Fe. It was a fight card featuring three of the fighting Bermudez sisters. Evelyn Bermudez (13-0-1) defeated Aixa Adema (3-5-4) by decision after a six-round flyweight match. But Gabriela Alaniz (8-0) won by technical knockout in the fifth round over Roxana Bermudez (2-2-2) in a flyweight clash.

Femke Hermans (11-3) won by unanimous decision after 10 rounds versus Luiza Davydova (3-2) on Saturday Dec. 5. The EBU middleweight title fight took place at Wavre. Hermans, 30, is a former super middleweight world titlist who lost a bid for the undisputed world championship to Claressa Shields in 2018.

On Saturday Dec. 12, super lightweights Elvina White (4-0) and Katarina Vistica (1-16) meet in a four or six round fight at Baden-Wurttemberg.

On Saturday Dec. 12, featherweights Nina Meinke (10-2) and Angela Cannizzaro (6-7-1) meet in an eight-round fight at Magdeburg.

Etsuko Tada (20-3-3) knocked out Ayaka Miyao (23-9-2) with a single left to the chin in the ninth round on Thursday Dec. 3. The WBO minimum weight world title fight took place at Tokyo. Tada, 39, retained the title for a second time. Both Tada and Miyao had fought to a draw back in January. Tada formerly held the WBA and IBF versions of the title.

On Sunday Dec. 13, super flyweights Miyo Yoshida (14-1) and Tomoko Okuda (6-2-2) meet 10 rounds for the WBO world title at Tokyo. This is Yoshida’s second defense of the title.

Shannon Courtenay (6-1) blasted out Dorota Norek (6-2) with a perfectly delivered right cross to win by knockout in the seventh round on Friday Dec. 4. The bantamweight clash took place in London, England. Courtenay, 27, dropped down one weight division to face Poland’s Norek.

Danielle Perkins (2-0) knocked out Princess Hairston (1-1) in the fifth round on Thursday Dec. 3. The cruiserweight fight took place in Los Angeles, California.