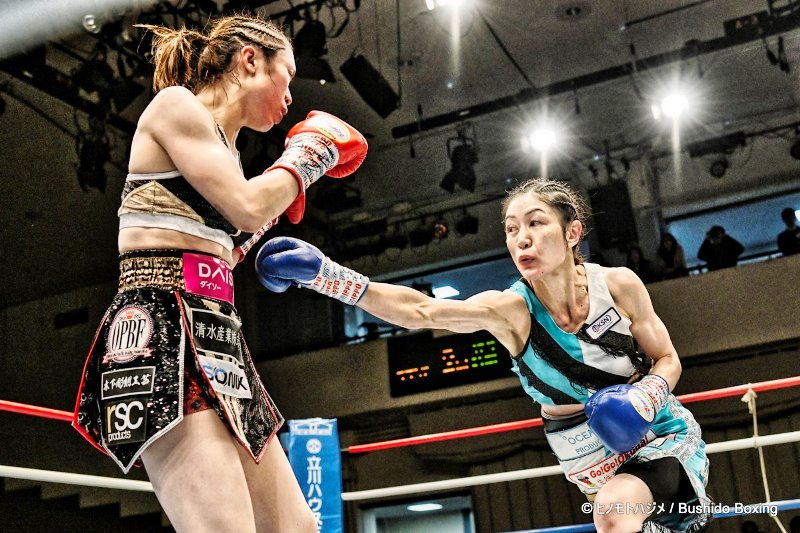 Okuda, an OPBF and Japan bantamweight champion, dropped Yoshida in the first round and led the fight until the referee halted the contest at 1:38 in the sixth round following doctor’s advice on the severe cut above Okuda’s right eye due to accidental headbutt.

Though it was an unfortunate termination, the dominance by Okuda was clear to the judges who gave the new world champion scores of 59-54, 59-54, 57-56. Yoshida could not make the second defense of her title.

It is interesting that Okuda seems to be following Yoshida’s same path.

Okuda beat Kanako Taniyama this past January in their rematch after a majority draw four months before to win the OPBF and Japan bantamweight titles, both were vacated by Yoshida after challenging for the super flyweight world title. Now Okuda dropped to 115 lbs to challenge Yoshida for her world title, in the same way that Yoshida dropped to 115 lbs to fight Casey Morton for vacant WBO title in 2019.

“I could make weight without problems. I am so excited to face Yoshida in the ring. This is the fight I’ve longed for. She is the one I wanted to fight against”, said Okuda before the world title fight.

The challenger prepared well for the aggressive style of the champion. The 5’6” tall Okuda used her long jabs and peppering punches to keep Yoshida, two inches shorter, away and to aim right counters. And the time came quickly in the later half of the first round as Okuda’s short right caught Yoshida who was rushing in to deck her and send her on her back.

The challenger re-charged in the next round with sharper jabs and combinations while Yoshida kept trying to get closer. The champion landed overhead rights a couple of times in the fourth round but not enough to win the round clearly. Yoshida continued plunging in and that way caused an accidental headbutt in the fifth round. The cut on Okuda’s right eyelid bled harder in the sixth round. The ringside physician advised that the title bout be discontinued.

“This is like a dream, but actually I imagined that I would be a world champion in this ring. Miss Yoshida was a true determined fighter as I expected. I don’t remember what I did as I focused totally into the fight. I just wanted to be a world champion today, so I am going to think of what’s next”, Okuda said in the ring.

From Judo to Boxing

The 37-year-old new champion has a very unique background. When she decided to start boxing at the age of 30, she was a physical education teacher and coach of Judo at a high school. In the bed at a hospital after she underwent surgery on ACL suffered in a Judo sparring match with her student, she fell in love with boxing as she watched a boxing fight of Kazuto Ioka on TV. That fight enticed her nature as a player, not as a coach, as she used to be a Judo competitor in college. She discontinued being a full-time Judo coach and became a part-time teacher to be a professional boxer. Though she has some room to improve in her boxing technique, it is matter of time as her lean muscular body shows that she is a true disciplined athlete.

It was the first fight for Yoshida with her new team since she moved to Misako Gym, one of the major stables, where many national and regional champions trained this past summer.

“Myself, I’m excited to see in the fight the improvement on my boxing that I’ve worked on with my new trainer Kenta Kato”, she said in a zoom meeting on the official announcement of this fight early November.

For this fight, she did her best to reduce risks of COVID-19 infection with her little daughter, including 10 hour drives in a private car, not a public transportation to go to Osaka, the opponent’s hometown, from Tokyo, where she lives. It is unimaginable how it is hard for a single mother to care her daughter and be a world champion, but I am hoping for her comeback.

There were many other women fights on the other promotion in the same venue that day.

Atomweight Sumire Yamanaka debuted in a four rounds contest with Arika Shimono, who was also a debutant, to win a unanimous decision with scores of 40-36, 40-36, and 39-37. 19 years old southpaw Yamanaka, a sister of former WBO minimumweight champion (male) Ryuya Yamanaka retired young due to a brain injury, impressed people with fluent moves and the power in the punches.

Current OPBF featherweight champion Wakako Fujiwara（10-3-2,3KOs）won a unanimous decision over Yuko Henzan (8-10-4, 2KOs) in a non-title six round bout. Although the champion could not finish up the skilled opponent, she led the fight with heavy jabs to be scored as 59-55, 58-56 by two.

In a four-round bout at super flyweight Marina Hamada (2-0-1) countered brave fighter Saeka Hori (0-1) with right straights to win a unanimous decision, 39-37 by all three judges.