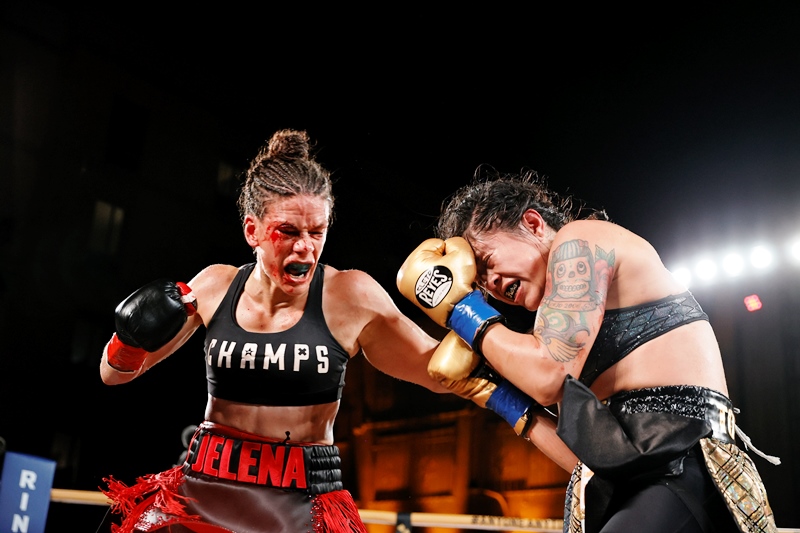 It was a reminder of the talent spread all over the world.

Serrano (39-1-1, 29 KOs) holds the WBO featherweight world title and the interim WBC version and engaged in a rematch with former world champion Dahiana Santana at the fighter’s native country Dominican Republic on Wednesday.

Three years ago, their clash lasted eight rounds with Serrano winning by stoppage. This time their encounter lasted less than two minutes as the brunette bombshell unloaded barrage after barrage against the Dominicana who tried to fight back.

Serrano took a few of Santana’s shots and gave back hellfire in stopping Santana with a short but deadly right hook. The fight was over.

Her quick demolition on Wednesday was just a reminder of her firepower and a message to the other featherweight titlists.

There are no easy fights against Mexicans.

Prizefighting is a national pastime for Mexicans and you can never look at their records to explain their talent. They fight each other to the life and death and Mrdjenovich discovered that despite four previous losses, Torres was there to win not bow down.

Back and forth the two featherweights exchanged concussive blows with a clash of heads opening a cut over the Canadian fighter’s head. Just when it seemed Mrdjenovich was about to take over, Torres would connect with a left hook and the two would engage again.

Mrdjenovich retained the WBA featherweight title by unanimous decision in a fight much closer than the scores indicated, but it was the correct decision. And now, the path is clear for Mrdjenovich to tangle with Serrano in a unification bout between featherweight champions.

“I don’t want to talk about that,” said Mrdjenovich when asked after her fight.

But talk or no talk a clash with Serrano or IBF titlist Sarah Mahfoud is inevitable.

It was the super featherweights turn on Thursday as IBF world titlist Maiva Hamadouche (22-1, 18 KOs) defended her title against Poland’s Nina Pavlovic (6-4-1) and won by bludgeoning in the seventh round.

Hamadouche is a wrecking machine with only one speed – 90 miles an hour of punching and shoving. Against the young Pavlovic it proved too much as she tried covering up against the ropes. That was a bad tactic. You can’t provide a sitting target for a human windmill.

Pavlovic went down in the second round and in the fifth round. She bravely tried to battle back but was outgunned and just did not have enough experience to stop the French fighter’s attacks. The fight ended with the Polish fighter in her corner shaking her head and trying not to vomit. She gave a good effort but was out-classed.

Hamadouche is now free to pursue a unification fight against the other world titlists. Or is she?

The French police officer formerly was fighting amateurs recently in a quest to compete in the next Olympics. It makes no sense for professionals to be included in the Olympic Games but that has been her goal. Maybe she will now shove that aside.

Who will she fight?

On social media she has accused Mikaela Mayer of ducking her. Mayer has countered that Hamadouche wants to beat up amateurs and should make up her mind.

Hamadouche versus Mayer sounds like a match to watch, especially at three-minute rounds.

Can Hamadouche fight her windmill style for three minutes? Will Mayer be able to use her length and angles against the pressure style of Hamadouche?

Choi was a complete mystery to anyone outside of Asia and displayed a very pleasing and energetic style. The Korean fighter known as “the Defector” for crossing the North Korean border to South Korea, walked into the boxing ring tall, pleasant and aggressive. She immediately opened up with jabs and combinations to drive back Colombia’s Silgado backward.

Silgado, an old veteran, made adjustments and quickly discovered openings for her devastating uppercuts. They connected but Choi seems to have one heck of a chin. She took the blows and delivered back some of her own.

In between rounds the trainer warned Choi not to take those kind of punches from Silgado and to use her intelligence. The tall Korean fighter took the advice and made the adjustments.

Only later did Choi revert back to a more action-packed style and the blows flowed freely between the two fighters. It was a dangerous move but fans loved it.

After 10 rounds it was clear that Choi has the talent to compete in boxing’s most talented division the super featherweights.

If Matchroom Boxing follows its predictable ways, they will match Choi against England’s Terri Harper who has the WBC title. That will have to be no sooner than April or May due to the broken arm suffered by the Englishwoman in her last fight.