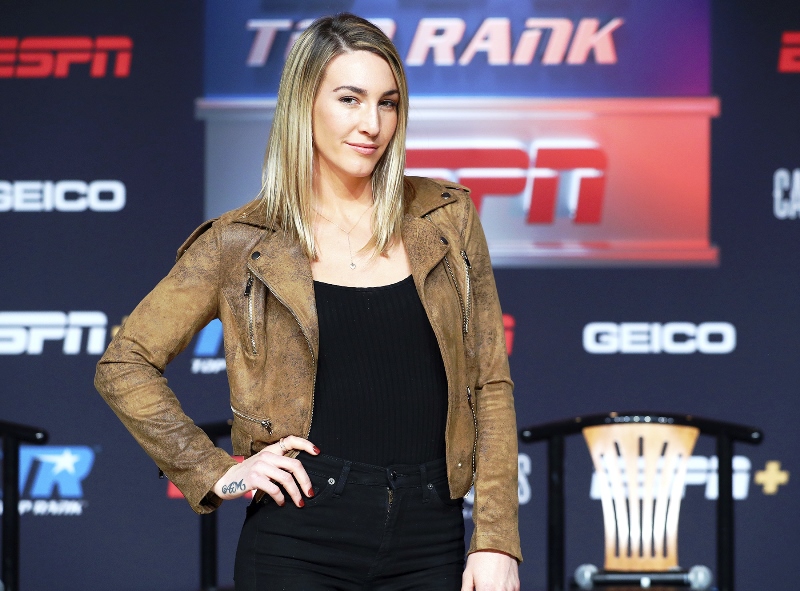 Mikaela Mayer wins WBO and Wants The Other Titles Too

Halloween night in the United States is known for its parade of disguises, candy and parties but for undefeated super featherweight Mikaela Mayer it will forever be etched in her memories as the night she became a world champion.  That night live on ESPN from The Bubble at the MGM Grand in Las Vegas, Nevada, Mayer of Los Angeles, CA, achieved the pinnacle of her career up to this point by easily out-pointing Ewa Brodnicka for the WBO 130-pound world title via a unanimous decision.

Despite reaching the goal every fighter has from the moment they lace up their first pair of gloves, the experience was a bit surreal for the 30-year-old Mayer.

“It feels, I don’t know, I really don’t feel all that different,” Mayer said recently during an exclusive interview with the all-female boxing podcast 2-Minute Round.  “I think maybe, let’s go back, I think during the fight when the whole thing happened was underwhelming.  There was no audience, the belt was left in the locker room, that whole experience was a little weird to me. It didn’t feel like a world championship.”

Another detail that made the event somewhat out of the ordinary was Brodnicka’s struggle with the weight.  In her first attempt at the scale the day before she came in nearly a pound heavier than the 130-pound limit.  After cutting her hair, working out and disrobing, she still was over by a tenth of a pound and thus losing her title at the scale.

“It was weird because she showed up to the weigh in early,” Mayer explained.  “If I was struggling to make weight, I would be late, they can wait an extra five or ten minutes. She showed up early, lounging around, she weighed in and was over and she was so casual about it.  She had an hour to lose a pound, an hour is plenty of time to lose .9, it is not that hard to do unless you are completely dehydrated.”

“She came back 45 minutes later, not sweating, not breathing hard and she’s over again,” she continued.  “They tried to cut her hair but by the time they did that, the time was up and she was still over.  To me it was weird.”

Now Mayer has one of the four major belts around her waist at super featherweight but according to her it is only the first step.  “There is so much more I want to accomplish.  It feels good to take that step which is very needed to be able to accomplish the rest of my goals.”

Mayer had been asking her promotor, Top Rank, for a world title opportunity for quite some time but once Matchroom Boxing announced earlier this year they had signed Brodnicka of Poland to an exclusive promotional contract, the WBO immediately ordered her to defend against Mayer.

Brodnicka is known for her mauling holding style enabled in her home country, but in her first fight out of Europe, it proved much more difficult to convince referee Celestino Ruiz to let her get away with it.

“I always knew I was the more well-rounded complete fighter,” Mayer said of Brodnicka and her style.  “I had no doubt in my mind I was going to take the belt from her.  Coach Al (Mitchell, Mayer’s trainer) prepared me for this.  Her style was more awkward than I expected it to be.  Coach Al, he sees these things so far ahead.  When you have somebody constantly running in these big circles, it can be frustrating, when you have someone constantly tying you up in the inside, it can be frustrating and throw you out of your game.”

“We worked on that and paid attention to her awkward ways,” she continued.  “It did take me a while, I felt my punches weren’t landing as clean as they normally do because the second I got in, she would hold and then be back on her bike.  I don’t think my punches landed as clean as they should have otherwise, I feel I would have stopped her.  That is why she was 19-0, that style gives a lot of people trouble.  Even though I don’t really care for that style, it is very defensive and not very exciting, it got her 19 wins.  It was a great learning experience.”

Mayer now has her eyes set on the rest of the big names in the division including WBA champion Hyun Mi Choi of South Korea, IBF champion Maiva Hamadouche of France and WBC champion Terri Harper of England.  All three of them are signed to England’s Matchroom Boxing.  Harper defended her title in two weeks after Mayer won hers with a ninth round TKO of the previously undefeated Katharina Thanderz of Norway.

“She did really well, she boxed great, she looked good,” a praiseful Mayer said of Harper’s performance.  “Katharina Thanderz style is made perfectly for her.  Kind of like, you can compare it to my fight against Helen Joseph.  That short style come straight into you.  When you are long and tall and you know how to box well from the outside, that is the style perfectly designed for you. She had a great opponent to make her shine.”

“At the end of the day, Katharina Thanderz is not me,” the confident Mayer stated.  “I am more well-rounded; Terri Harper would not be able to hold me off as easily as she did Thanderz.”

The fact that in the last year Eddie Hearn of Matchroom Boxing began to sign all the mayor players at 130 pounds does not make Mayer lose any sleep.  “I have no problem with it.  People thought I was salty but I am not salty.  At least I know where to find them, before they were scattered throughout the world, hard to get a hold of.  Now at least we know who to go through and that is Eddie Hearn.  I hope he will be willing to make these fights happen.”

To reach her goal of unifying the division, Mayer must get through all the women Hearn has recently signed including the mysterious Mi Choi of South Korea. All of Mi Choi’s fight have been in her home country but later this month she will be making her United States debut on the undercard of Gennady Golovkin vs. Kamil Szeremeta on DAZN.

“At least we now know she exists,” Mayer said jokingly.  “This is just proof that women’s boxing is evolving.  There is no more room for champions to be off fighting in their countries and can’t be found.  Not fighting anybody with a name, those times are over.  We are going to change that; I know the girls who are on top of the game are hungry and want to change that too.”