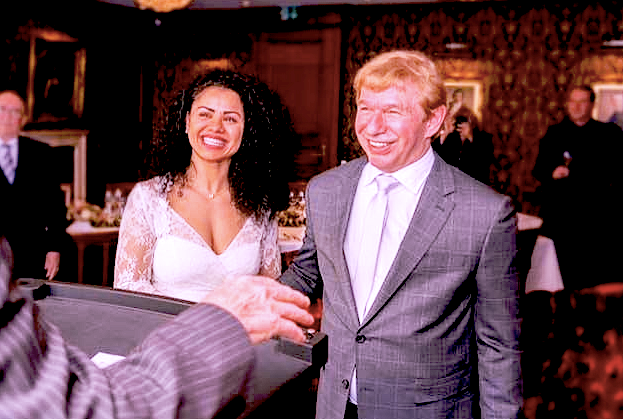 Sadly, what was probably the worst news in women’s boxing during 2020 exploded a few weeks before what holiday fireworks remained and hit long darkened skies.

Just as the often disastrous calendar finally came to an end, a disturbing story emerged from Switzerland involving world class title challenger Viviane Obenauf, who has allegedly been arrested and still incarcerated in connection with the gruesome killing of her estranged husband Marco Tagliavini.

At this point Swiss confidentiality and procedural guidelines preclude specifics regarding such identification. Technically, she is not yet an indicted defendant.

While her name is not officially listed as the primary suspect by police or the press, and there’s no documented proof that she was even taken into custody, Obenauf reportedly remains confined pending formal allegations.

A man was murdered. Whatever develops, it’s a tragedy.

When ThePrizefighters.com contacted the (territorial) Canton Police of Bern to clarify media statements, Obenauf was not named, but a homicide was verified and, while intangible, the tone of an immediate response seemed to indicate that initial reporting from the area was accurate overall. At press time there was no contact available with attorneys connected to the situation.

Swiss police provided us with the following summary in regard to case status:

“We would like to point out that in Switzerland charges will only be brought after a criminal investigation has been carried out. The Compulsory Measures Court examines the legality of the pre-trial detention. The court dates of the Compulsory Measures Court are not public, and criminal proceedings in Switzerland are subject to secrecy until the indictment is brought and are also not public.

What can also be said is that on November 12, 2020 the Compulsory Measures Court ordered pre-trial detention for three months. It is now necessary to clarify what role the woman plays in connection with the crime.”

That means it’s basically a month longer, around Valentine’s Day, before the court’s next stage. Further media information from the police outlined basic details of the killing and investigation thus:

“On Monday, October 19,2020, shortly before 8:00 am, the Bern Canton police received a report that a deceased person had been found in a property in the so-called “Des Alpes area” on Hoheweg in Interlaken.

“Forensic investigations have revealed that the man died from the effects of massive injuries… inflicted on him by means of a blunt object. In this context, several objects that could be used as tools (weapons) were seized at the crime scene.”

The investigation is being handled by the Oberland Regional Public Prosecutor. The police posted that a suspect -allegedly Obenauf- was arrested in connection with the crime on November 9th, “on the basis of various suspicious factors.”

According to an unnamed neighbor, a non-uniformed group, presumably Swiss detectives, searched and sealed off an apartment Obenauf had recently moved into and removed multiple items. She had been after separated from her husband approximately three weeks prior to his death.

Prior to the separation, Obenauf and the victim apparently lived together above the victim’s restaurant in the Interlaken region. Interlaken Mayor Urs Graf told Blick, “This act shook us, the victim and restaurant were very well known. She (presumably Obenauf) was always cheerful. Everyone knew her, of course that causes animated village talk.”

On the scheduled time and date of a detention hearing on the matter, Obenauf was observed and identified by media in a police transport vehicle arriving and departing from the court. At times she covered her face, and made no statement to the press.

Obenauf was born in Rio de Janeiro, named Viviane de Jesus Costa. After moving to Switzerland, in 2009 she married in Austria, taking her current surname. She was divorced in 2013 and moved back to Switzerland with her young son.

As news media sought further background information numerous acquaintances offered statements on her behalf and there was no disputing many accounts that Obenauf is a devoted mother.

But not everyone was so supportive, and troubling circumstances from her past may have been revealed. Some appeared trivial, others not.

Blick news reported that Obenauf was arrested, briefly put in jail and fined on her birthday in 2016 for punching a man in the face at a London bar. She claimed he had groped her, so if that’s the case he probably deserved it even though she busted him up.

In a seemingly more serious situation, a former relation told Blick she had also bloodied him with punches, after a Good Friday celebration turned into a dispute about whether she could drive after the couple, who rarely consumed alcohol, drank wine.

“She hit me three or four times directly in the face with her fist,” said the unidentified source per Swiss confidentiality rules. “I gave her a slap and she slowly calmed down and went to sleep.” After they broke up, he filed proceedings to have her boxing license withdrawn due to an ongoing, assaultive temper but declined to follow up due to other family matters not related to Obenauf.

Perhaps the most revealing statement came from former coach Andre Schenk. “She was a very nice person but at certain moments she didn’t think normally,” Schenk was quoted by Blick news. “She certainly would not plan a murder, but she has potential for aggression.”

It remains very important to remember the judicial presumption of innocence, especially in a matter of this significance. It must also be pointed out that many unproven details which surfaced after the victim was discovered should currently be considered hearsay that was disclosed in a sensationalistic, tabloid-type manner.

Still, from what information has become available the circumstances are obviously horrible. One way or another, it isn’t unreasonable to assume Obenauf is dealing with a terrible situation. The question is whether or not she brought it upon herself.

Those close to the victim are dealing with a more terrible situation. While he was never identified in the press or by the authorities, from the late man’s restaurant and related social media posts it seems vividly certain the victim was Obenauf’s husband, 61-year old Marco Tagliavini.

The 34-year old Obenauf was said to have recently retired from the ring while continuing to work as a personal trainer and boxing coach, but there was apparently no official announcement and she remains highly ranked by Boxrec and various organizations. Now, almost certainly, she will never box professionally again.

Current possible outcomes cover a wide range, from complete exoneration with no allegations filed and outright dismissal of Obenauf’s investigation to a full conviction of the most severe charges and a maximum sentence. Switzerland has strongly opposed the death penalty for decades.

At press time Obenauf’s social media account still contained a wedding photograph, posted almost exactly a year ago; that was subsequently re-posted on other accounts including the Swiss Boxing Association website.

Whatever truths or justice might emerge in this case, there will be no happily ever after. It turns out the beaming couple in that now heartbreaking image would never get to celebrate their first anniversary. Call it the frailty of passion, cold whim of emotion, or some other blaze of the heart.

Phil Woolever writes for thePrizefighter.com and is based in Germany.