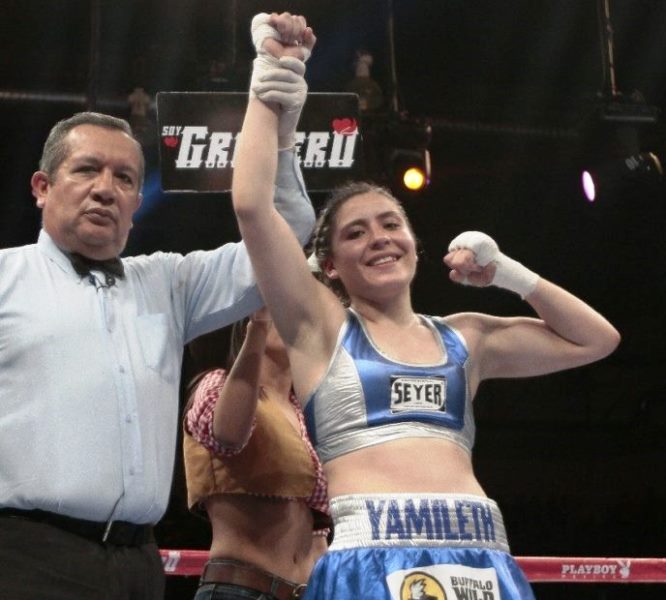 With a hard-fought unanimous decision current WBC super-bantamweight champion Yamileth Mercado (17-2, 5KO) defended her green and gold belt over Alejandra “Rockera” Guzman (11-2-2, 5KO) this past Saturday night from Hermosillo, Mexico, and live on the Azteca Channel.  The win, the main event presented by Zanfer, marked Mercado’s first defense after capturing the title in late 2019 against the then champion Fatuma Zarika of Nairobi, Kenya.

Mercado had not seen action since her world title fight last September scoring a fourth round TKO against the overmatched Irasema Reyes in Tijuana, Mexico. Mercado suffered a broken nose for her troubles and had to wait to recuperate from the injury to defend her title.  Guzman on the other hand had not seen action since November of 2019 when she scored a third round TKO over Maria de los Angeles Nuñez also in Tijuana.  The fight against Mercado was her first opportunity for a world title.

The fight did not go off without controversy.  At the official weigh-in, the challenger Guzman tipped the scales at 121.6 pounds while the champion Mercado went over topping the scale at 122.3 pounds.  According to official reports, Mercado was not forced to drop the excess weight.  In the past officials of the WBC have cited a rule in their by-laws which according to them states a female can be over the limit because of water retention due to her menstrual cycle.  As of this writing, no rule has been found in the official website or documents of the World Boxing Council.

Guzman of Ciudad Obregon, Mexico, made use of her long reach in the opening round, controlling the distance with a firm jab from the center of the ring.  Mercado seemed to need some time to find her rhythm as she circled the perimeter of the ring, but with a second to go to end the first stanza, the champion forced an exchange that proved to be the wrong decision since Guzman scored a hard left hook that shook Mercado.

Ciudad Cuauhtémoc, Mexico’s Mercado began to apply the pressure from the second round scoring with a straight jab followed with the right hand.  She began to find a home for a looping over hand right but Guzman was countering well making a hesitant Mercado hold off from an all-out attack. The 24-year-old Guzman scored with another hard left hook that stopped Mercado in her tracks for a split second.

Mercado kept bringing in the heat but carefully since Guzman was still countering well and scoring the harder punches.  With a more precise and fluid attack, Mercado scored with straight punches through Guzman’s high guard in the fourth but by the end of the round Guzman again stopped the champion in her tracks with yet another straight right hand.

With Guzman still entrenched in the fight, Mercado went for broke halfway through the fifth and forced the challenger against the ropes attacking the body and head.  Guzman seemed outside of her element at a shorter distance, not able to counter and no able to escape with lateral movement.

The second half of the fight fell into a pattern with Mercado starting off the round from a distance but then quickly finding herself on top of Guzman against the ropes.  Guzman at times was able to push the action back to the center of the ring but it was less frequent.

It seemed as if it was going to be smooth sailing for Mercado for the rest of the right but in the last round, needing a knockout to win, Guzman scored a hard right hand at the opening of the round that made Mercado take a couple of steps back.  Seconds later Guzman followed it up with a left hook that made Mercado’s knees buckle and then hold.  Not to be outdone, Mercado went after Guzman looking to score her own hard punches.  Guzman kept looking for a big punch but the bell came quicker ending the fight.

After the titillating finish, the judges scores were announced with two of them turning in exact scorecards of 98-92 while the third scored it 98-93, all for Mercado.  ThePrizeFighters.com saw it slightly closer with a score of 96-94 for the defending champion.