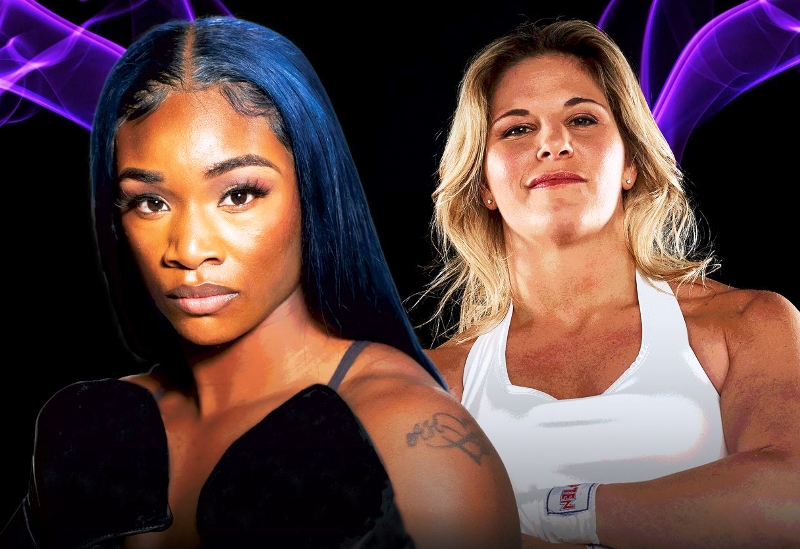 It’s not the first time a pay-per-view for an all-female card has been attempted, but it marks more than a decade since it last occurred.

Back in 2005, a promoter named Arnold “Tokyo” Rosenthal steered a regular women’s boxing series called “Ring Of Their Own” that included two pay-per-view fight cards. The New Yorker was one of the few promoters interested in pushing women’s boxing at the time.

Things have changed for the better.

In less than a month, women’s boxing returns on the pay-per-view format with America’s two-time Olympic gold medalist Shields (10-0) facing Canada’s heralded Dicaire (17-0) for the WBO, IBF, WBA and WBC super welterweight world titles on Friday March 5. The pay-per-view card cost $29.95 and will be streamed on FITE.TV.

Shields has been inactive in the prize ring for more than a year through no fault of her own. It’s one of the blows the ultra-talented fighter sustained due to the pandemic.

“We’ve been waiting for this fight to happen for months, so I’m just excited to be back in a boxing training camp and preparing to step back in the ring,” said Shields.

This fight was originally set for last spring and then again in late summer, but conditions never improved and then Showtime network decided to shutter her fight completely for reasons unknown.

After attempts to arrange a fight card on different networks failed – including UFC Fight Pass – the decision was made by Shields co-manager Mark Taffet to put her fight on pay-per-view. It’s a vehicle not used for women’s boxing since 2008. Others had used pay-per-view before such as Laila Ali vs Christy Martin in 2003.

Taffet, who formerly devised the pay-per-view apparatus for HBO Boxing back in the early 1990s, is confident that Shields and company can draw enough interest for the unification world title fight. Three other female fights are planned for the boxing card that takes place in Flint, Michigan.

DiCaire remained committed to fighting Shields and has tremendous interest from Canadian fans. She also has proven to be quietly building up a strong professional resume as a prizefighter and remains undefeated so far.

Can she stop the Shields freight train?

No man or women ever captured as many world titles in three divisions in such a short time span. The closet was Vasyl Lomachenko.

Also, on the pay-per-view card will be light heavyweight sensation Danielle Perkins facing Monika Harrison in an eight-round rematch. They fought last year in California in a fight won by Perkins. Another bout pits middleweights Logan Holler against Schemelle Baldwin in an eight-round clash. A fourth bout has been planned.

Pros in the Olympics – Why?

The Olympic Committee decided a few years back to allow professional boxers to take part in qualification for the 2021 Tokyo Olympics in Japan. Maybe to fire up interest in the Olympic Games like the NBA basketball stars did back in the early 1990s. Though the original date for the Olympics was bumped up, professional boxers will still be allowed to box in the games when they happen.

Boxing is not basketball. It’s a sport designed for contact and youngsters can get hurt.

A rash of professional world champions such as Yesica Bopp, Maiva Hamadouche and others have chosen to participate in the Olympic trials in search of further glory. Or shame?

Many of these prizefighters have already had their opportunities to compete for the Olympics. Almost from the beginning of the modern Olympics boxing has been a sport that allowed the youngsters to gain fame and glory. Now the professionals are trying to bump off the youngsters.

It is a shame.

Maira Moreno (7-1) knocked out Ana Guichapani (13-2-1) in the ninth round to win a regional title on Saturday Feb. 13. The lightweight fight took place at Perez, Santa Fe. Moreno fights out of Uruguay. Also, Gabriela Alaniz (9-0) defeated Aixa Adema (3-6-4) by unanimous decision in an eight-round flyweight bout.

Marcela Nieto (2-0) knocked out Kairuan Montenegro (2-8) in the third round on Saturday Feb. 13. The super flyweight bout was held at Planeta Rica.

Martina Righi (1-0) won by decision after four rounds over Ksenija Medic (1-19-2) on Friday Feb. 12. The flyweight match was held at Toscana.

Mea Motu (5-0) won by unanimous decision after six rounds versus Ayisha Abied (0-2) on Saturday Feb. 13. The featherweight contest was held in Auckland.

Ana Maria Lozano (19-10-1) defeated Diana Beroes (0-1) by decision after for rounds on Tuesday Feb. 9. The featherweight match was held at Caracas.

Estefania Matute (1-14) defeated Kelia Hernandez (0-2) by knockout in the first round on Monday Feb. 8. The super flyweight bout was held in Caracas.