L.A. Fighters Maricela Cornejo and Two Others in Action
Written by: David A. Avila 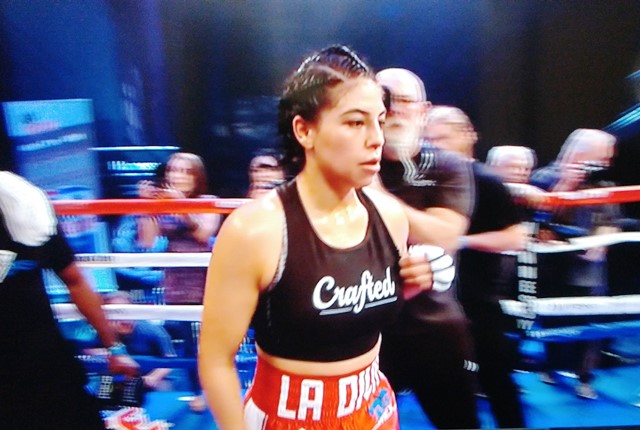 Three City of Angels representatives head to other destinations this week and all of their bouts will be streamed or televised.

Cornejo, who now lives in Los Angeles, is a native of the state of Washington and had reportedly dropped down to 154 pounds. She had been fighting at 160 pounds but it’s often difficult to find competition above 160 pounds. The higher the weight the scarcer the participants. This fight was reportedly at 168.

Ibarra, 33, fights out of Monterrey, Mexico and has not fought since November 2019 when she lost by decision to American middleweight contender Raquel Miller in Canada.

Both Ibarra and Cornejo stand almost equal in height at 5’9 and 5’10 respectively. Each fighter needs a win to remain a contender. Cornejo wants another world title crack.

“Get this win Thursday night. This fight is my main focus. This is going to be a total war, the bloodiest fight. I’m ready for that. I’m looking forward to all that, come Thursday night,” said Cornejo during a conference call.

Cornejo has trained with legendary trainer Buddy McGirt in Los Angeles since last May 2020. She professes to have a better understanding on fight strategy.

“Buddy has helped me so much just knowing the fight game. I finally feel I’m there. I know what I have and so much to prove,” said Cornejo, whose last fight was for the WBC and WBO super middleweight world titles against champion Franchon Crews-Dezurn.

That fight took place more than two years ago. Though it ended in a loss, many were impressed by Cornejo’s gritty performance.

Cornejo knows that her foe has an amateur pedigree along with solid pro experience. It motivates her.

“I know I can throw it down. I don’t have all that amateur background – four amateur fights – I know I have that inside of me,” Cornejo said about competing with anyone. “Just if she wants to bring it, my right hand will be right there to welcome there.”

Estrada’s last match took place last summer when she unleashed a seven-second knockout. That probably won’t occur in this instance. Ortiz has not lost a fight in nine years.

Ortiz has defended the WBA title 12 times since winning it on July 2013. Many expect a very competitive fight.

Estrada has never fought at 105 pounds or less. But she walks around at that weight and has been forced to fight bigger and heavier opposition. The fight will be 10 two-minute rounds.

Ruiz has long been one of Southern California’s best kept secrets and has developed a reputation as a no-nonsense hunter. She is never satisfied with a decision win and always goes for the knockout.

Osorio, 28, has only been stopped once as a pro and that was in her pro debut. She has fought many of the best fighters including Isabel Millan, Marlen Esparza and Seniesa Estrada. She is defending the title.

Debora Gomez (7-5-1) defeated Carla Moreno (3-2) by majority decision after six round on Saturday March 13. The super flyweight bout was held in Cordoba.

Martina Bernile (1-0-1) won by decision after eight rounds versus Giorgia Scolastri (1-1) on Saturday March 13. The flyweight clash was held at Sicilia.

On Saturday March 20, super flyweights Sonia Osorio (14-7-1) and Adelaida Ruiz (9-0) meet 10 rounds for the interim WBC title at Rivera Nayarit. It will be shown on Fights Night pay-per-view.

Jessica McCaskill (10-2) beat Cecilia Braekhus (36-2) again but this time by unanimous decision after 10 rounds on Saturday March 13. The battle for undisputed welterweight world champion was held in Dallas, Texas.

On Saturday March 20, minimum weights Anabel Ortiz (31-3) and Seniesa Estrada (19-0) meet 10 rounds for the WBA world title at Fort Worth, Texas. DAZN will stream the fight.